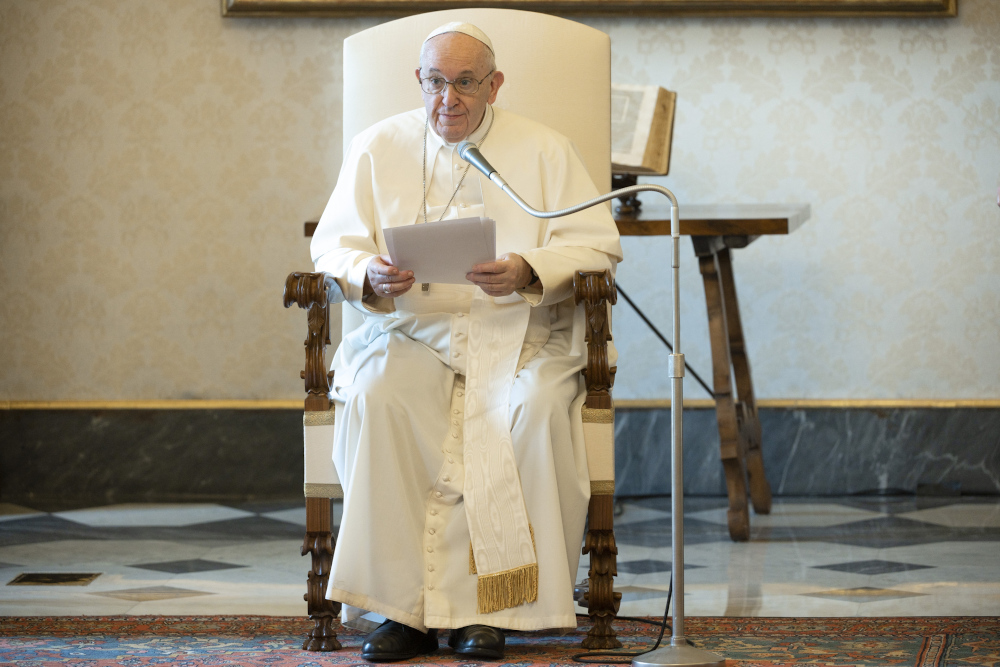 Pope Francis leads his weekly general audience from the library of the Apostolic Palace at the Vatican June 10, 2020. During the COVID-19 pandemic, the audience is being livestreamed without the presence of pilgrims and tourists. (CNS/Vatican Media)

True prayer is a "fight" with God in which those who think they are strong are humbled and faced with the reality of their own mortal condition, Pope Francis said.

The story of Jacob wrestling with God throughout the night is a reminder that although prayer reveals "that we are only poor men and women," God also has a "blessing reserved for those who have let themselves be changed by him," the pope said June 10 during his weekly general audience.

In the audience, livestreamed from the library of the Apostolic Palace at the Vatican, the pope continued his series of talks on prayer. And before concluding the audience, he reminded the faithful of the June 12 observance of the World Day Against Child Labor.

Calling child labor a "phenomenon that deprives boys and girls of their childhood," the pope said that the COVID-19 pandemic has forced children and young people in many countries to work in "jobs that are inappropriate for their age to help their families in conditions of extreme poverty."

He also warned that "in many cases, these are forms of slavery and imprisonment, resulting in physical and psychological suffering."

The pope's concern for child labor comes nearly a week after the death in Pakistan of Zhora Shah, an 8-year-old child maid who allegedly was beaten to death by her employers after accidentally releasing their prized parrots. The case has sparked outrage in Pakistan and around the world.

"Children are the future of the human family," Francis said. "It is up to all of us to foster their growth, health and serenity!"

In his main talk, the pope reflected on the story of Jacob, an "unscrupulous man" who despite the odds, "seems to succeed in every feat in his life."

"Jacob — we would say in today's modern language — is a 'self-made man.' With his ingenuity, he is able to conquer everything he wants. But he is missing something: he lacks the living relationship with his own roots," the pope said.

It is on a return trip to see his brother Esau — whom he defrauded for an inheritance — that Jacob encounters the stranger who fights with him. Citing the Catechism of the Catholic Church, the pope said that this struggle is "the symbol of prayer as a battle of faith and as the triumph of perseverance."

Overcome by a strike to the hip, the stranger — whom Jacob later realized is God — blesses him and gives him the name "Israel." The pope said that Jacob ultimately enters the promised land with a limp, but also "with a new heart."

"Before he was a confident man, he trusted in his own cunning," he said. "He was a man impervious to grace, resistant to mercy. But God saved what was lost."

"We all have an appointment with God in the night," Francis said. "He will surprise us when we do not expect it, when we find ourselves truly alone."

But, the pope said, "we need not fear because in that moment, God will give us a new name that contains the meaning of our whole life."