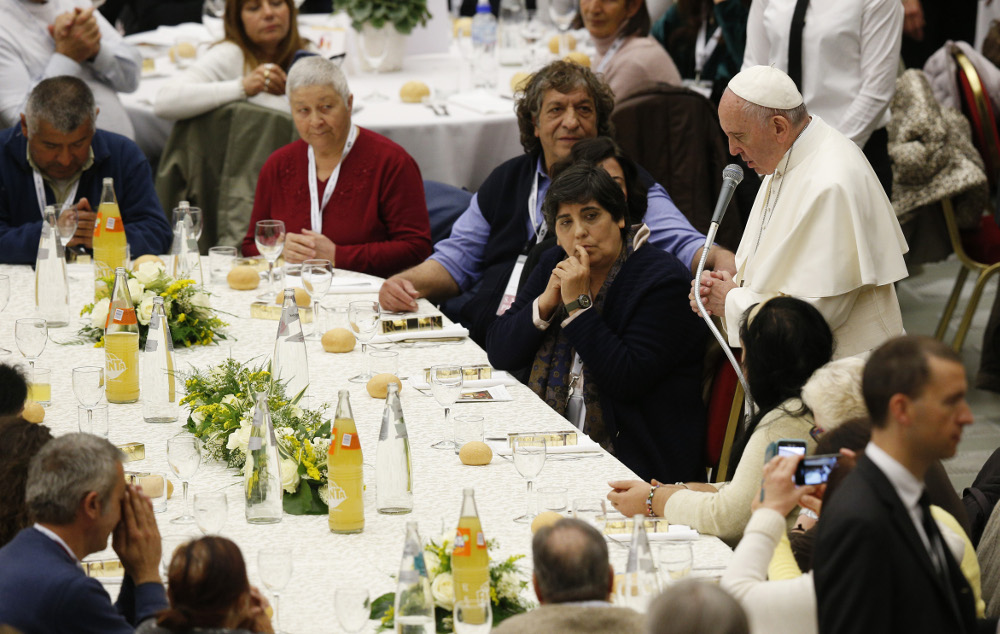 Pope Francis leads grace before eating lunch with the poor in the Paul VI hall after celebrating Mass marking the first World Day of the Poor at the Vatican Nov. 19. Some 1,200 poor people joined the pope for the meal. (CNS/Paul Haring)

People have a basic choice in the way they live: either striving to build up treasures on earth or giving to others in order to gain heaven, Pope Francis said.

"What we invest in love remains, the rest vanishes," the pope said in his homily Nov. 19, the first World Day of the Poor.

Between 6,000 and 7,000 poor people attended the Mass in St. Peter's Basilica as special guests, the Vatican said. While almost all of them live in Europe, they include migrants and refugees from all over the world.

Among the altar servers were young men who are either poor, migrants or homeless. The first reader at the Mass, Tony Battah, is a refugee from Syria. Those presenting the gifts at the offertory were led by the Zambardi family from Turin, whom the Vatican described as living in a "precarious condition" and whose 1-year-old daughter has cystic fibrosis.

In addition to the bread and wine that were consecrated at the Mass, the offertory included a large basket of bread and rolls that were blessed to be shared at the lunch the pope was offering after Mass. Some 1,500 poor people joined the pope in the Vatican's audience hall for the meal, while the other special guests were served at the Pontifical North American College — the U.S. seminary in Rome — and other seminaries and Catholic-run soup kitchens nearby.

Preaching about the Gospel "parable of the talents" (Mt 25:14-30), Pope Francis said the servant in the story who buried his master's money was rebuked not because he did something wrong, but because he failed to do something good with what he was given.

"All too often, we have the idea that we haven't done anything wrong, and so we rest content, presuming that we are good and just," the pope said. "But to do no wrong is not enough. God is not an inspector looking for unstamped tickets; he is a Father looking for children to whom he can entrust his property and his plans."

If in the eyes of the world, the poor they have little value, he said, "they are the ones who open to us the way to heaven; they are our 'passport to paradise.' For us it is an evangelical duty to care for them, as our real riches, and to do so not only by giving them bread, but also by breaking with them the bread of God's word, which is addressed first to them."

Where the poor are concerned, the pope said, too many people are often guilty of a sin of omission or indifference.

Thinking it is "society's problem" to solve, looking the other way when passing a beggar or changing the channel when the news shows something disturbing are not Christian responses, he said.

"God will not ask us if we felt righteous indignation," he said, "but whether we did some good."

People please God in a similar way to how they please anyone they love. They learn what that person likes and gives that to him or her, the pope said.

In the Gospels, he said, Jesus says that he wants to be loved in "the least of our brethren," including the hungry, the sick, the poor, the stranger and the prisoner.

"In the poor, Jesus knocks on the doors of our heart, thirsting for our love," he said. True goodness and strength are shown "not in closed fists and crossed arms, but in ready hands outstretched to the poor, to the wounded flesh of the Lord."

Before joining his guests for lunch, Pope Francis recited the Angelus prayer with thousands of people in St. Peter's Square.

The previous day in Detroit, he told the people, Capuchin Fr. Solanus Casey was beatified. "A humble and faithful disciple of Christ, he was known for his untiring service to the poor. May his witness help priests, religious and laypeople live with joy the bond between the proclamation of the Gospel and love for the poor."

Pope Francis told the crowd that he hoped "the poor would be at the center of our communities not only at times like this, but always, because they are at the heart of the Gospel. In them, we encounter Jesus who speaks to us and calls us through their suffering and their needs."

Offering special prayers for people living in poverty because of war and conflict, the pope asked the international community to make special efforts to bring peace to those areas, especially the Middle East.

Pope Francis made a specific plea for stability in Lebanon, which is in the middle of a political crisis after its prime minister announced his resignation. He prayed the country would "continue to be a 'message' of respect and coexistence throughout the region and for the whole world."