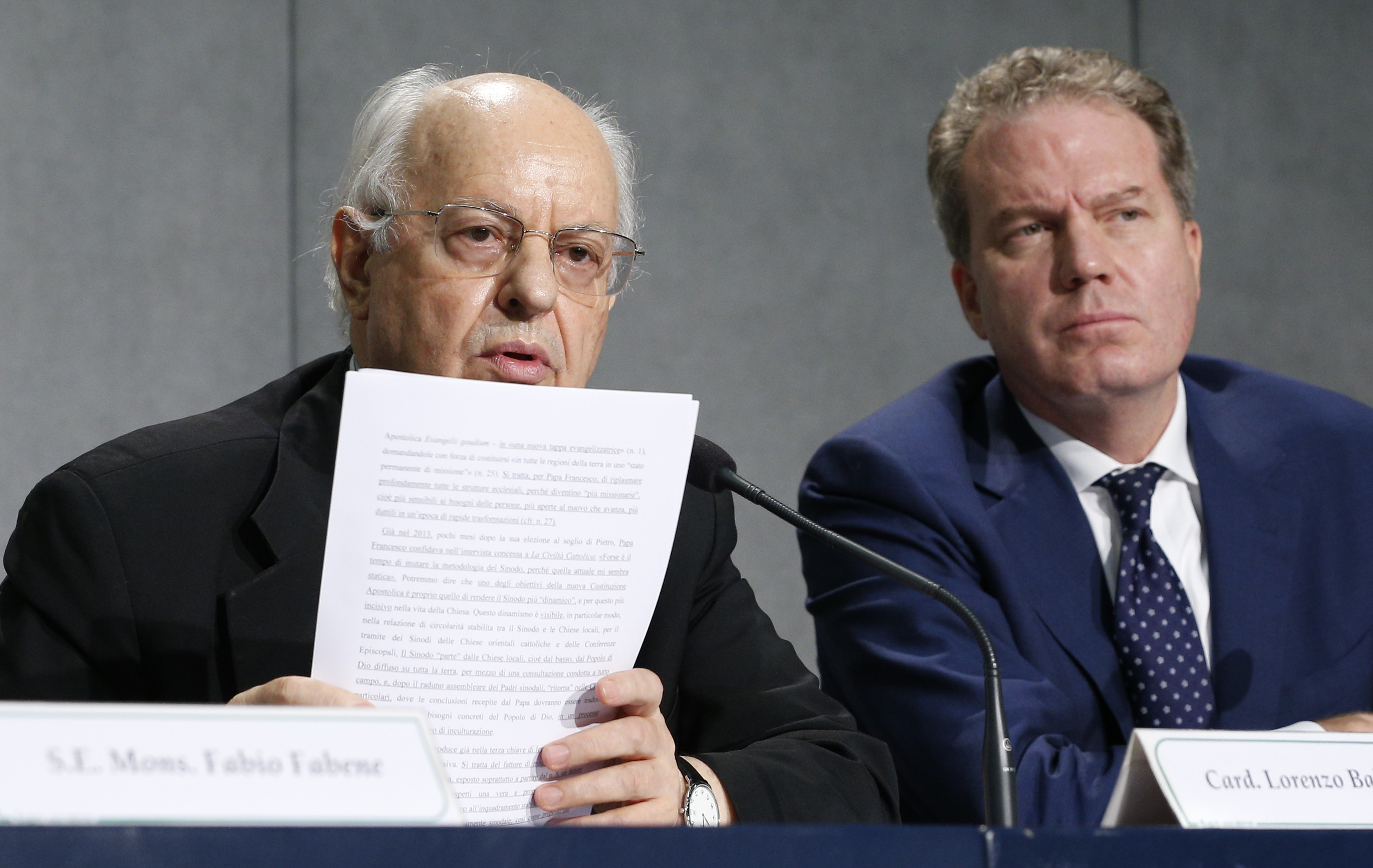 Cardinal Lorenzo Baldisseri, secretary-general of the Synod of Bishops, holds documents during a Sept. 18 Vatican news conference to announce synod changes. Also pictured is Greg Burke, Vatican spokesman. Pope Francis has issued an apostolic constitution, updating the rules of how the synod is prepared for, conducted and implemented. (CNS/Paul Haring)

The Synod of Bishops increasingly should be a structure for listening to the Catholic faithful, demonstrating a local bishop's concern for the entire church and a means of expressing all the bishops' unity with the pope, Pope Francis said.

Replacing Blessed Paul VI's 1965 document that established the Synod of Bishops and building on changes made to the synods over the past five decades, Francis issued an apostolic constitution, providing a theological explanation of the synod's role in the church and updating rules for how a synod is prepared for, conducted and implemented.

The constitution, "Episcopalis Communio" ["Episcopal Communion"], also states for the first time that voting members of the synod do not necessarily have to be priests. In preparation for the October synod on young people and vocational discernment, the Union of Superiors General, the organization of leaders of men's religious orders from around the world, elected two religious brothers to be members of the synod.

Discussing the normal voting members of the synod, Francis' new rules, which were published only in Italian Sept. 18, said that "according to the theme and circumstances, others who are not honored with episcopal duties can be called to the synod assembly with a role to be determined by the Roman pontiff."

Asked if that meant that women or women religious could be full voting members of the synod, Bishop Fabio Fabene, undersecretary of the Synod of Bishops, said that according to the new rules the men's Union of Superiors General "can elect any male religious, even nonpriests, as the pope had permitted by exemption in the last two synodal assemblies. As for women, they are already present as observers and participate in the synodal assembly and the small groups and have a right to speak."

"At the moment, it is established that the men's union of superiors elects members," but the women's International Union of Superiors General does not. Fabene said, "For now, that it how it is."

But the main changes Francis made to the synod are less visible and more profound.

Paul established the synod as an instrument through which "bishops chosen from various parts of the world are to offer more effective assistance to the supreme shepherd," the pope.

But Francis, almost from the beginning of his papacy, has called for the entire church to be "synodal."

Marking the 50th anniversary of the synod in 2015, the pope said the church should be synodal at every level, with everyone listening to one another, learning from one another and taking responsibility for proclaiming the Gospel.

Through baptism and confirmation, all members of the church have been anointed by the Holy Spirit, Francis has taught. But, even more, he has said, the entire church community is infallible when its members discern together and speak with one voice on matters of faith and morals.

"The 'sensus fidei' [sense of faith] makes it impossible to rigidly separate the 'ecclesia docens' [teaching church] and the 'ecclesia discens' [learning church], because even the flock has a 'nose' for discerning the new paths that the Lord is opening up to the church," Francis said in 2015.

In the new constitution, Francis said each bishop must be "simultaneously a teacher and a disciple," proclaiming the Gospel with the power of the Holy Spirit, but also listening to what the Holy Spirit has inspired the lay faithful to tell him.

"While in its composition it is configured as an essentially episcopal body, the synod still does not live separated from the rest of the faithful," he wrote. "On the contrary, it is an instrument suitable for giving voice to the whole people of God precisely through the bishops."

Obviously, the pope said, the synod is not a Catholic parliament. "In the church, in fact, the aim of any collegial, consultative or deliberative body is the search for the truth or the good of the church," so prayerful discernment and openness to the Holy Spirit is key at every stage.

However, the pope also said the final document adopted by a Synod of Bishops, when approved by the pope and ordered public, becomes part of the "ordinary magisterium," or teaching, of the pope himself.

Cardinal Lorenzo Baldisseri, general secretary of the Synod of Bishops, told reporters it is possible that Francis or a future pope could decide that the synod's final document is enough on one subject and he would forgo writing a post-synodal apostolic exhortation, a tradition St. John Paul II started.

Francis, the cardinal said, saw the updating of the synod as an essential part of the renewal of "all church structures" so that they would be "more missionary, that is, more sensitive to people's needs, more open to what is new, more flexible in an age of rapid transformation."

Fr. Dario Vitali, a consultant to the synod and professor of dogmatic theology at Rome's Pontifical Gregorian University, told reporters the pope's constitution can be understood through what then-Pope Benedict XVI described as "the hermeneutic of reform in continuity" with the tradition of the church.

Such reforms, he said, allow "the whole church to remain faithful to the Spirit without closing itself off in a defense of the past and its forms, without venturing into ahistorical experimentation, but remaining firm in the living -- and, therefore, dynamic -- tradition of the church."