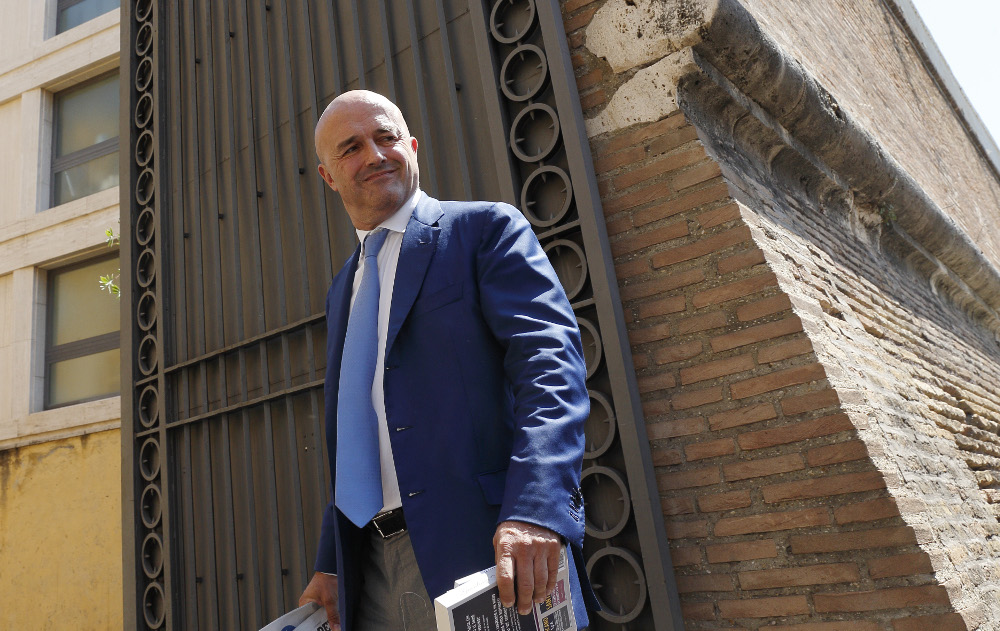 Italian journalist Gianluigi Nuzzi, author of "Merchants in the Temple," arrives for the "VatiLeaks" trial at the Vatican July 7, 2016. Nuzzi's recent book "Original Sin" has helped spark a Vatican investigation of a pre-seminary for abuse. (CNS photo/Paul Haring)

The Vatican announced it had launched a new investigation into reports about sexual abuse in a pre-seminary for young adolescents run by the Diocese of Como, Italy, but located inside the Vatican.

Greg Burke, Vatican spokesman, issued a statement Nov. 18 saying that beginning in 2013 when "some reports, anonymous and not," were made, staff of the St. Pius X Pre-Seminary and the bishop of Como both conducted investigations.

"Adequate confirmation was not found" regarding the allegations, which involved students and not staff. Some of the students already had left the pre-seminary when the first investigations were carried out, the statement said.

However, "in consideration of new elements that recently emerged, a new investigation is underway to shed full light on what really happened," the statement said.

In early November, the Italian journalist Gianluigi Nuzzi, whose books based on leaked Vatican documents were at the heart of two Vatican trials, published a new book, "Original Sin." The book included allegations about sexual abuse at the pre-seminary where boys in middle school and high school live. They serve Mass in St. Peter's Basilica and attend a Catholic school in Rome while considering applying to a seminary when they are older.

The allegation in Nuzzi's book about one student abusing another was followed by an investigation by the Italian television program "Le Iene."

In the program, a young Polish man, identified only as 21-year-old Kamil, said he arrived at the pre-seminary at age 13, wanting to be an altar server for the pope. He said he was thinking only vaguely of becoming a priest one day.

Kamil claimed another student, one given responsibility by the rector for determining the liturgical roles of all the students at papal Masses, regularly sexually abused his roommate.

Kamil said the older student would come into their room at night, get into bed with his roommate and abuse him. The alleged abuser was ordained to the priesthood last summer, "Le Iene" reported.

In the program, the roommate is referred to as Marco, who is now 24 years old. He confirmed the allegations Kamil made.