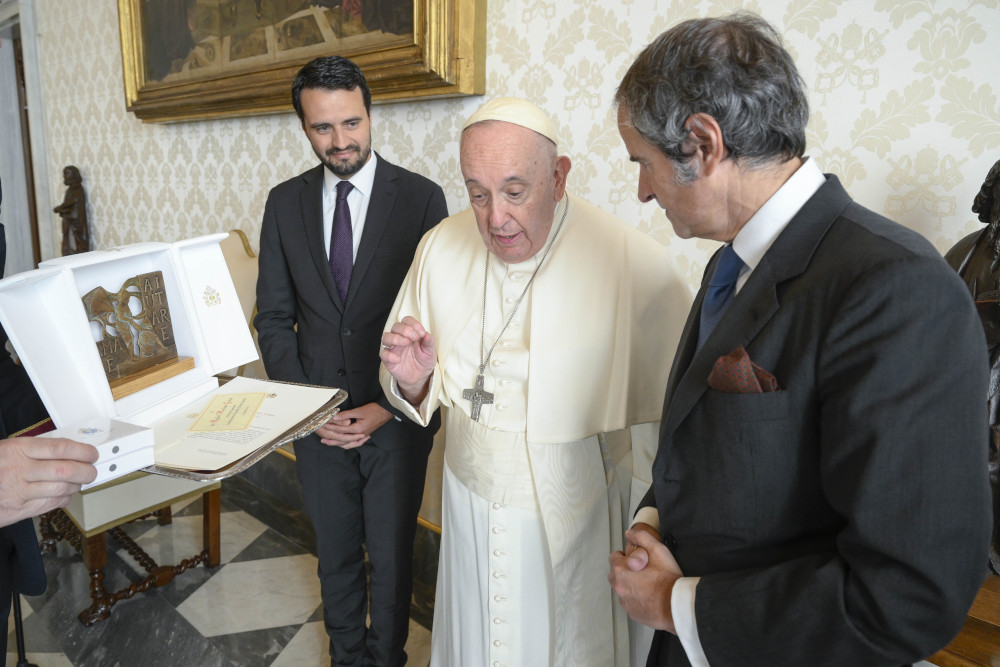 Pope Francis gives gifts to Rafael Grossi, director general of the International Atomic Energy Agency, during a meeting Jan. 12, 2023, in the library of the Apostolic Palace. Grossi said they discussed the threat of a disaster from bombings of a nuclear power plant in Ukraine. (CNS photo/Vatican Media)

Pope Francis' condemnations of the threat of nuclear war are "indispensable," said the head of the U.N. nuclear energy agency.

Speaking with the Vatican newspaper, L'Osservatore Romano, the Argentine diplomat said that the Holy See's support in finding a multilateral approach to avoid nuclear disaster in Ukraine is "fundamental," and that the pope's voice is particularly important in this conflict that is based in Europe and involves Christians around the world.

The IAEA currently has a four-person team present at the Zaporizhzhia nuclear plant in Ukraine to monitor the security situation. The plant, which is the largest in Europe, was captured by Russian forces in March 2022. Both the Ukrainian and Russian militaries have accused the other side of recklessly shelling the plant and risking a nuclear disaster.

Francis drew attention to the situation in his general audience Aug. 24 by saying that he hoped "concrete steps will be taken to end the war and avert the risk of a nuclear disaster in Zaporizhzhia."

Grossi said the current situation in Ukraine is "precarious" and that "the bombings around and at the plant at Zaporizhzhia continue."

He said he would travel to Ukraine the week of Jan. 16 and expects to meet with Ukrainian President Volodymyr Zelenskyy and other officials. Although Grossi has expressed his desire to travel to Moscow, a Kremlin spokesperson has said that Russian President Vladimir Putin has no plans to meet with him.

The diplomat also expressed his concern about the stall in negotiations regarding the Iran nuclear deal. He said that negotiations are at an "impasse" and that he hoped to travel to Tehran as soon as possible.

Francis shared his concern over the lack of negotiations on the Iran deal with foreign ambassadors Jan. 9, saying he hoped a "concrete solution can be reached as quickly as possible, for the sake of ensuring a more secure future."

Grossi noted that while both the IAEA and the pope have made clear the risks of producing more nuclear weapons, the "exclusively peaceful use of nuclear power is important," especially as humanity faces another crisis beyond nuclear war: climate change.