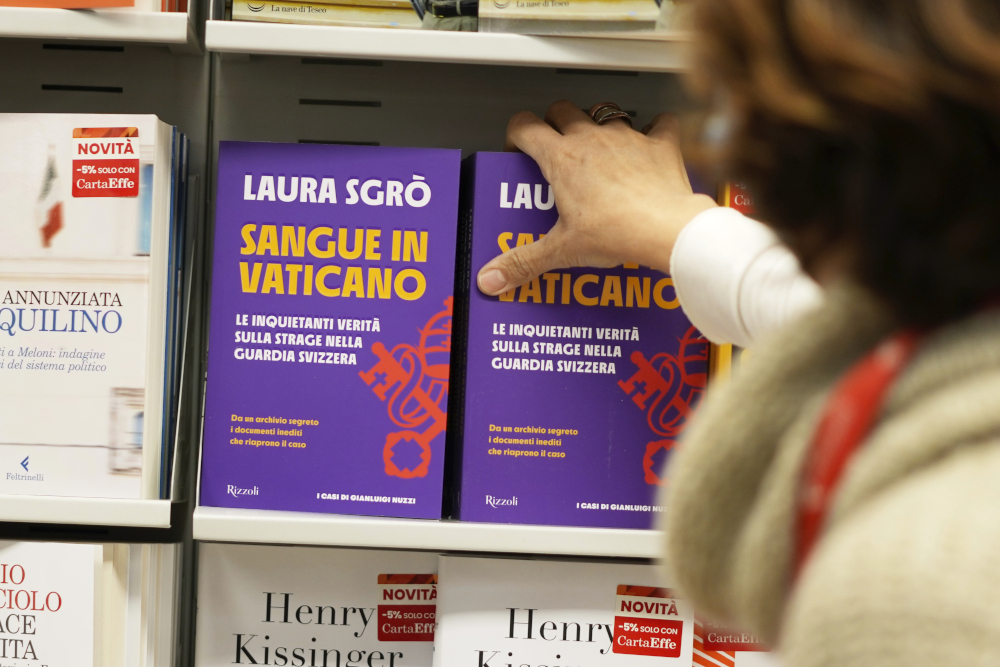 Copies of the book Sangue in Vaticano (Blood in The Vatican) by lawyer Laura Sgro', are displayed in a bookshop during its launch in Rome, Tuesday, Nov. 29, 2022. (AP Photo/Andrew Medichini)

The mother of a Swiss Guard member accused of committing one of the most sensational crimes in recent Vatican history – fatally shooting his commander and the senior officer's wife before killing himself -- is turning to the United Nations and Pope Francis in hopes of getting some closure nearly a quarter-century after the slayings.

Muguette Baudat was on hand Nov. 29 as her lawyer, Laura Sgro, a veteran defense attorney in Vatican criminal trials, detailed her efforts to pry information out of the Vatican and access the court file into the May 4, 1998 slayings that are recounted in Sgro's new book, "Blood in the Vatican."

"I've been waiting for more than 24 years, so I don't expect anything," Baudat said at a book launch event. But she added: "The book is very important."

Within hours of the slayings, the Vatican spokesman announced that Baudat's 23-year-old son, Cedric Tornay, a noncommissioned Swiss Guard officer, had killed Col. Alois Estermann and Estermann's Venezuelan-born wife, Gladys Meza Romero, with his service revolver and then turned the gun on himself. The spokesman said a buildup of resentment over a reprimand by Estermann and the denial of a decoration, combined with a ″peculiar″ psychology, led to Tornay's violent acts.

Nine months later, in February 1999, the Vatican released a 10-page summary of its internal investigation that confirmed its initial assessment. It concluded that Tornay was solely responsible for the murder-suicide but added that his marijuana use and a brain cyst the size of a pigeon's egg could have impaired his reasoning.

Baudat spent two decades campaigning for more information and hired Sgro in 2019, asking for the Vatican investigation to be reopened. She said her request was not spurred by a belief that the Vatican was responsible, but rather to end the secrecy with which it has always handled the case.

Last year, the Vatican secretary of state intervened personally in the case and asked the Vatican tribunal to pay "particular attention" to Baudat's request. Sgro was granted access to the court file.

In the book, Sgro details what she found in the file, as well as the conditions imposed on her by the Vatican prosecutor for viewing it: She wasn't allowed to make copies but could only view the documentation in the tribunal, with two gendarmes standing behind her back monitoring her at all times. She was allowed to take some notes but not too many since she was explicitly barred from copying the text. She had to submit her notes to the prosecutors' office after each viewing session, which took place over the course of a year.

And what she discovered in reading the court file, she said Nov. 29, "confirmed all the doubts that the mother had about an investigation conducted in an absolutely superficial way."

Sgro noted that at least 20 people were allowed access to the crime scene in the moments after the slayings, including chaplains, monsignors and the Vatican spokesman, none of whom wore protective gear. No fingerprints or blood samples were taken, and no DNA tests performed.

A handwriting analysis of a letter, purportedly from Tornay to his mother and foreshadowing the killings, was done on a photocopy, not the original document. The corpses were moved around the Estermann apartment, as was furniture, according to 38 photographs taken by a Vatican newspaper photographer that were in the court file. Autopsies were performed not in a hospital morgue but in the crypt of a chapel inside the Vatican walls.

"After one hour, Cedric was given up as the guilty one and the investigation was built around this, and this is absolutely the most alarming thing," Sgro said.

The lawyer alleged that the conditions in which she was forced to work to view the file, as well as the mother's long fight to find information about her son, constituted human rights violations that should be taken up by the U.N. Human Rights Council in Geneva.

There was no indication Tuesday whether the U.N. might take up her case, since such complaints must show a consistent pattern of "gross violations" of human rights, such as the policy of apartheid in South Africa.

Sgro said she had little other recourse since the Holy See is not a signatory to the European Convention on Human Rights, and therefore not a party to the European Court of Human Rights in Strasbourg, where such appeals would normally be heard. The Holy See enjoys observer status at the U.N. and has received criticism from U.N. human rights experts over the clergy sexual abuse scandal.

Sgro said she sent a copy of "Blood in the Vatican" to Francis and he responded with a personal letter. His response, she said, gave her hope that the Vatican might be ready to acknowledge that its original investigation was flawed and that Tornay's legacy might somehow be rehabilitated even if he is confirmed as the killer.

"It's a small drop after 24 years of silence," Sgro said. "Let us hope this drop becomes a glass of water, then a lake."