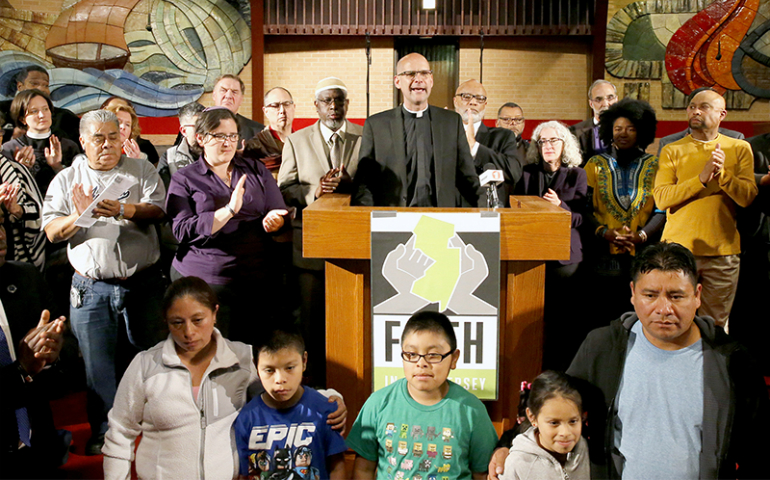 The Rev. John Mennell, center, invites clergy and others to come to the pulpit and stand for immigrants and to resist deportations as part of the Faith In New Jersey program at Bethany Baptist Church on May 4 in Newark, New Jersey. (NJ Advance Media/Aristide Economopoulos)

Beneath the curved wooden ceiling at Bethany Baptist Church, New Jersey’s faith leaders vowed to stand alongside those targeted under the White House agenda — and build their own wall of resistance to President Donald Trump's policies.

"Not on our watch will anyone have to stand or fight alone," said the church's pastor, Timothy Jones on May 4. "Now more than ever is the time for people of all faiths to get together to work for the joint goal of building community."

"We cannot stand idly by, we cannot stay on the sidelines," said the Rev. John Mennell before more than 150 clergy members as Trump made his first presidential visit across the Hudson River before heading to his Bedminster golf course.

The archbishop of Newark, Cardinal Joseph Tobin, also addressed the interfaith gathering, sharing a poignant scene from a novel about Italian fascism.

"What keeps despots, dictators awake at night, what topples evil empires is the little person who goes into the square in the middle of town in the dark of the night and scrawls on the wall, 'No.' and I want to say to you, we are the 'No' that God scrawls on the wall," Tobin said. "We are the 'no' to a nation who is heartless, who would deport people separating them from their families and their loved ones simply because they are victims of a broken system."

Catalino Guerrero, an undocumented immigrant from Union City, met with immigration officials Friday. Guerrero has an order of deportation but the community has fought to keep him in the U.S.

Menendez, too, spoke briefly after arriving from Washington, D.C.

"Indeed we practice different faiths … but there is far more that unites us than divides us," he said after railing against the U.S. House passing "cruel" legislation to repeal Obamacare Thursday.

Clergy members pressed their colleagues for action to help the uninsured and on other issues as wide-ranging as climate change, the criminal justice system and gun violence — citing their faith as a basis for solidarity.

Guerrero, and other undocumented immigrants facing deportation were also present Thursday as clergy members promised to stand by them.

There were also supporters of Carimer Andujar, a student advocate of undocumented immigrants at Rutgers University who was recently summoned by immigration officials and fears deportation.

"Christians believe that faith without works is dead, our faith isn't just pie in the sky," Tobin told NJ Advance Media. “It's recognizing those who are struggling among us and supporting them."