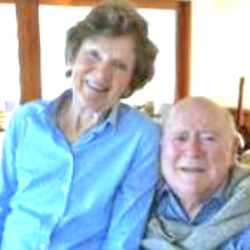 Jeanne Marie Lee, beloved mother of six, Nana of 15 and Great Nana of 12, died on January 16, 2021 at the age of 90 in her home in the Town of Hunts Point, WA.  Her cancer, which she decided not to treat ten years ago, finally got the last word, which she knew it would.

Jean Marie was a former National Catholic Reporter board member and she and her late husband, Rhoady, were generous NCR benefactors. Rhoady passed away in 2012.

Tom Fox, NCR's Editor/Publisher Emeritus, said: "Jeanne Marie’s passing is a deep loss to her many friends at NCR, board members and staff, the many who knew her, loved her dearly, and found so much light and hope in her strong and gentle spirit.  It is impossible to think of Jeanne Marie without also thinking of her dear soulmate of 61 years of marriage, Rhoady. They were a team, a generous twosome, who supported many Catholic causes, NCR included."

Fox, who honored the Lees with a special presentation in 2010, added: "As Father Michael Ryan aptly said in his tribute to her during the mass of resurrection. 'She lived and taught love.'  Every day."

Jeanne Marie was born to Irene and George McAteer in 1930 and was raised on Capitol Hill with her brother Jim, attending Holy Names Academy. She went on to Seattle University, where she sang opera, graduated Summa Cum Laude and met the love of her life, Rhoady Lee, Jr. They married while she was still at Seattle U and settled in Bellevue soon thereafter to raise their large, close-knit family. She had five children in six years, and while sometimes she burnt the toast or forgot to pick them up from school, she was lovingly committed to them. So much so that six years later, she had another, Michael!

While she grew up a city girl (she never lost her love of style), Jeanne Marie embraced adventurous activities as an adult, from tennis to horseback riding, fly-fishing to boating. She and Rhoady surrounded themselves with good friends that enjoyed these same activities, usually traveling in large and boisterous groups to each locale, with many of the kids in tow. 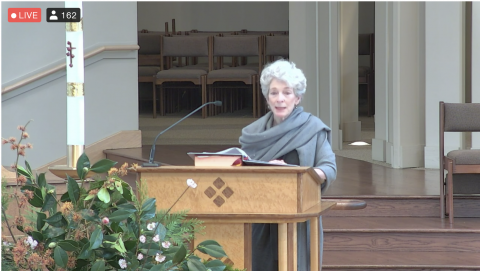 Jeanne Marie's daughter, Maureen, speaking at the Jan. 21 service
They were avid skiers and built a large cabin in Alpental with their dear friends, the Dempseys. They taught their children from a young age to love the mountains and every weekend would cram the family station wagon full of kids and pets and supplies for the adventures ahead. Jeanne Marie’s tent was big, and she and Joan Dempsey fed Nimpo Lake Casserole to every kid who came through their door, many of them not their own!

Eventually, Jeanne Marie and Rhoady settled on Sun Valley as their ski and fly-fishing destination of choice, where they purchased a family house, as well as a cattle ranch south of Bellevue, ID.

Their love of skiing and horses was contagious, and both homes were often full of loud, multigenerational contingents. Jeanne Marie and Rhoady also frequently vacationed at the Mauna Kea Beach Hotel, where they bought a lot in 1982 and built a stunning family home designed by their son, Rhoady III.

They retreated from the Seattle rain each winter, and even after Rhoady passed, Jeanne Marie enjoyed nothing more than watching her grandchildren and great grandchildren splash and play in the pool.

She was an eager participant, attending every school play, baseball game, choir concert and the like of her many grandchildren. She loved a good party, and never wanted to miss a moment of conversation or merriment anyone might be having around her. When she learned of the colloquialism, “FOMO” (fear of missing out), she remarked, “I think I’ve had that my whole life!”

Love of family and love of God were Jeanne Marie’s guiding principles throughout her life. She and Rhoady attended mass at Sacred Heart Church in Bellevue and her children attended Forest Ridge School and Seattle Preparatory School, as well as Lakeside School. She was a voracious reader, and her intellectual mind and curious spirit fostered a deep appreciation for education. In addition to NCR, she served on the board of Holy Names Academy.

She and Rhoady received the Elizabeth Ann Seton Award from the National Catholic Education Association, as well as the St. Ignatius Medal and honorary doctorates from Seattle U, for their lifelong support of Catholic education. Jeanne Marie was also an enthusiastic supporter of the arts and regularly attended the Seattle Opera, the Seattle Symphony and events at the Seattle Art Museum, and served on the Seattle Youth Symphony board.

Jeanne Marie is survived by her six children, Sharon, Rhoady (Alan), Tim (Tina), Maureen (Mark), Mary Pat (John) and Mike (Mary), her 15 grandchildren and 12 great grandchildren, who give special thanks to Jeanne Marie’s caregivers in Seattle and Hawaii. The family held a private service at Sacred Heart Church in Bellevue on Thursday, January 2021.