Catholic philanthropist Rhoady R. Lee Jr. was remembered Monday for his love of family, his optimism, his generosity of spirit and his sharp wit at a Mass of the Resurrection at Sacred Heart Church in Bellevue, Wash. He died at his home on Hunt's Point, Wash., on Aug. 22 at the age of 84, surrounded by family and friends. 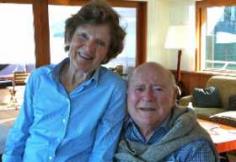 "Faith was the lens through which he looked at life, family and friends who were the joy of his life," said Fr. Michael Ryan, a longtime family friend, who celebrated the Mass. "He was a modest man in every way, unpretentious and common as an old shoe. The only accolades Rhoady was ever comfortable with were the ones he gave to others.

"His entire life was a humble walk with God. He was every inch a Christian, and his Catholic faith ran deep within him. His faith was solid, it was alive, it was intelligent -- with just enough questions, concerns, and 'issues' to make it very real. With [his wife] Jeanne Marie, he lived and breathed the great vision of the Second Vatican Council and he never stopped believing that the Church he loved could be and should be better than it was.

"When I stopped by late Wednesday morning only hours before he died, his granddaughter, Lauren, was reading him a poem of John O'Donahue's on dying. 'Read it again,' he said, 'and slowly.' He listened with rapt attention, with a smile and a look of great contentment on his face -- although a little while later, he did express certain impatience with Jesus for not coming for him a little more quickly.

"Our last conversation is something I will never forget. I told him that when he got to heaven, his work wouldn't be finished. 'When you get up there,' I told him, 'you need to pray for all of us and you need to pray for the church.' I told him I thought he should team up with Pope John XXIII to crank open the church's windows again and keep the renewal going. With that familiar glint in his eye, he said, 'OK, I'll look John up when I get there.' "

While on a family boat along Alaskan shores in mid-August, Lee took ill and was flown to Seattle, where he entered a hospital for several days before he asked to be taken home. There, he was surrounded by Jeanne Marie, his six children, their spouses and partners, and 15 grandchildren.

"Our home is full of grace," Jeanne Marie said at the time.

A priest who attended to Rhoady only two days before his death was said to have said to Rhoady, "You will be in heaven soon," to which Rhoady replied, "I'm already in heaven."

My wife and I have had the good fortune to know the Lee family for a number of years. Rhoady was one of the most optimistic souls I ever met. He led an active life. He loved the outdoors, was an avid skier in his youth, and kept a herd of cattle in Montana.

In more recent years, slowed by illness, he maintained a most becoming positive outlook. When he was asked, "How're you doing?", he would respond: "Any better, I couldn't stand it."

He meant it. He always saw below the everyday moment. He knew he had been generously gifted in life by a loving wife, children, grandchildren and friends.

He enjoyed wine and cultivating grapes for fine wines. Once traveling with him in Vietnam, I fetched a bottle of wine for a pre-dinner drink among friends. Sheepishly, I brought to our hotel a bottle of wine of modest vintage. Presenting it to him, he quipped, as if to reassure me not to worry: "I never met a red I didn't like."

I felt that summed up his attitude toward life: adventurous, optimistic, humorous and nonjudgmental. I was so impressed with Rhoady, as were many others who packed an overflowing church for his funeral Mass, that I asked if I could help him write his autobiography.

Rhoady was born in Seattle in 1928 and lived in the Seattle area all of his life. He graduated from O'Dea High School in 1946 and from Seattle University with a business degree in 1950, where he met Jeanne Marie. They were married 61 years.

Rhoady worked for his father in the hotel business. Later, he bought a small sand and gravel company and later, an asphalt paving business.

Successful at business, Rhoady always shared his gains. He and Jeanne Marie have supported innumerable charities, particularly Catholic schools. Rhoady served on the boards of Seattle University and Forest Ridge School in Seattle, chaired various capital campaigns and received numerous awards for his service, among them: the Elizabeth Ann Seton Award from the National Catholic Education Association; the first Alumnus of the Year award and St. Ignatius Medal from Seattle University; and an honorary alumnus award from Forest Ridge School.

Rhoady is survived by his wife, Jeanne Marie; his sister, Sheila Lee; his children, Sharon, Rhoady III, Timothy, Maureen, Mary Pat, Michael and their spouses and partners; and his 15 grandchildren and their spouses.

Homily from the funeral for Rhoady Lee