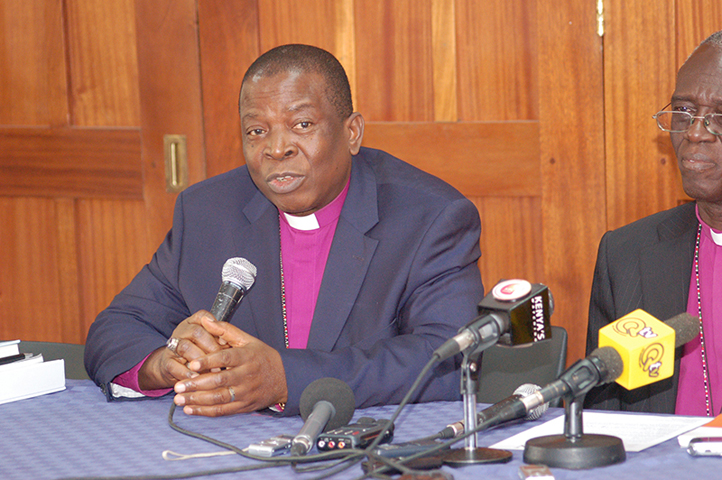 Archbishop Nicholas Okoh, left, of Nigeria and Archbishop Eliud Wabukala of Kenya speak at a recent news conference in Nairobi. The two provinces are boycotting the meeting in Lusaka, Zambia. (RNS/Fredrick Nzwili)

The Anglican Church in Kenya has become the latest province to announce it will boycott the Anglican Consultative Council meeting in Zambia over the participation of the Episcopal Church.

The Episcopal Church was recently censured at a primates' meeting in Canterbury, England, because of the American church's willingness to ordain and marry LGBT people.

According to the sanctions, the Episcopal Church cannot represent the communion at the April meeting or vote on doctrine and polity.

Anglican Archbishop Eliud Wabukala of Kenya said the Episcopal Church's presiding bishop, Michael Curry, had made it clear that his church would not reconsider its stance on same-sex marriage and that Curry expected his church to play a full part in next month's meeting in Lusaka, Zambia's capital.

"There can be no true walking together with those who persistently refuse to walk in accordance with God's word, and the Kenyan province will not participate in the forthcoming meeting," Wabukala said.

Ugandan Anglicans announced a similar boycott in February. In a letter, Archbishop Stanley Ntagali said his church would not participate in any such conferences of the Anglican Consultative Council until "godly order is restored."

"It is like we are back in 2003 where we continue to be betrayed by our leaders," Ntagali said. "The primates voted to bring discipline to the Episcopal Church, and yet we now see that the leadership of the Anglican Communion does not have the will to follow through. This is another deep betrayal."

Nigeria, too, has written to say its bishops will not attend, according to church officials.

"The bottom line … is that nothing has changed," said Archbishop Nicholas Okoh of Nigeria.

The Anglican Church of Rwanda, which has often acted in concert with Nigeria, Kenya and Uganda, has yet to make a decision, according to Archbishop Onesphore Rwaje.