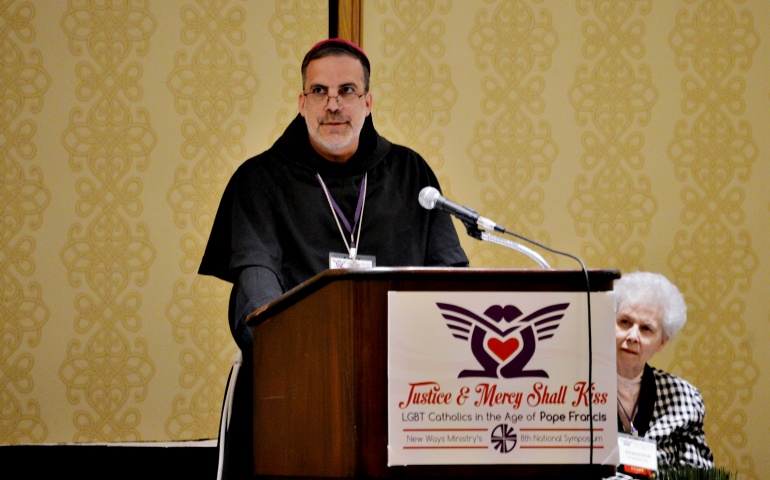 Bishop John Stowe of Lexington, Kentucky, at the New Ways Ministry symposium in Chicago April 28. Loretto Sr. Jeannine Gramick, co-founder of the organization, is seated behind him. (Robert Shine)

Clad in traditional brown Franciscan robes, Bishop John Stowe of Lexington, Kentucky, seemed at home among the rainbow of colors at New Ways Ministry's eighth annual symposium here April 28-30. This was the first time that the bishop had spoken in front of the advocacy group, which supports lesbian, gay, bisexual and transgender Catholics.

"New Ways Ministry made me want to come here," the bishop told NCR during a 40-minute interview at the gathering. He has been observing and admiring the group's outreach to LGBT Catholics over several years, he added.

New Ways Ministry director Frank DeBernardo invited Stowe, 51, after he'd heard the bishop give scriptural reflections at the 2016 annual meeting of the Conference of Major Superiors of Men.

"I couldn't believe what I was hearing," DeBernardo said, comparing Stowe's words to those of Pope Francis and to St. Francis of Assisi. All three men seemed to be saying that "it was the church's job to take the Gospel to the margins," DeBernardo said.

Stowe said he was honored to be asked "to break open God's Word" with the 300 weekend participants. The Franciscan offered homiletic reflections on two Gospel texts read at the April 28 opening prayer service (Matthew 12:1-14) and at the April 29 morning service (Luke 6:37-45). Retired Auxiliary Bishop Thomas Gumbleton of Detroit, also on the program, had to decline due to a viral infection.

Stowe said he is humbled by those who have pursued "a life of faith in a church that has not always welcomed or valued" them or their worth. As a shepherd, he needs to hear their voices and take seriously their experience, he said, adding that both the presence and persistence of LGBT Catholics inspired him.

They've shown "a valuable expression of mercy" in calling the church "to be more inclusive and more Christ-like despite being given so many reasons to walk away," he said.

But his acceptance of the invitation to address the New Ways Ministry gathering did not sit well with many Kentucky Catholics and others farther afield.

"The flack has been enormous and continues on the blogosphere" and from "self-righteous strangers online and those who subscribe to these feeds," Stowe said, calling some of the posts and e-mails "vicious."

The uproar quieted somewhat after the bishop addressed the issue on a local Catholic radio show in December 2016, "but it never completely died down. I expect it will resurface after the symposium," he said.

Among objectors, Stowe believes there are many who are sincere Catholics and are "really struggling" with all the issues around homosexuality. He said he hopes and prays "for a culture of encounter" to ensue so "we can become fully engaged with those who want to live the Catholic life and who love the Catholic Church. ... Why would we want to turn our backs on them?" he asked.

Stowe harkened back to St. Francis' encounter with the beggar 800 years ago. At first, the leper with his open sores repelled him, but later St. Francis was able to kiss the leper. "He was transformed by his encounter," the bishop said. The reaction was fitting for a symposium with the theme "Justice and Mercy Shall Kiss: LGBT Catholics in the Age of Pope Francis."

"Our usual way of thinking is that justice and mercy are incompatible," Stowe said. But Pope Francis has asked Catholics to find new ways to work together, to open up new possibilities and to try to be nonjudgmental of one another, he added. "We all still require [mercy]; it's about the need for a conversion of attitudes for both the institutional church and for all its members," Stowe said.

When Stowe was asked how he felt the church should respond to cases of LGBT employees — many of whom had been fired from long-held church positions when their same-sex marriages were publicized or outed — he stressed that the church must be consistent and non-discriminatory in dealing with all its employees.

"We must preserve our tradition and our integrity as a church," he said. "We risk contradicting ourselves if we want our employees to live by the church's teaching and if we ourselves as an institution don't live by our teaching, which has always opposed discrimination of any sort."

Stowe thought the church could find a way to "defend our religious liberty without violating any one's human rights."

He pointed to its century-long championing of working people, of their rights to a living wage, to humane treatment in the workplace and to collective bargaining. "We must be consistent, even though that can be very difficult sometimes."

The challenge is to "articulate Gospel principles consistently and implement them compassionately," he said, noting that Catholic social teaching has always upheld the dignity of each human person. "We preach that human flourishing is a primary goal," he said, "much more important than the protection of our institutions."

Although he has been a bishop less than two years and thus attended few national bishops' meetings, he said there is fear shared by the leadership that legislation and judicial rulings could increase pressure on the institutional church to resolve workplace issues with LGBT employees differently.

However, there is the graver reality that the church has alienated "a whole generation," he said.

Stowe said that on his many visits to confirmation classes, teens in his diocese ask: "Why can't gay and lesbian people be themselves? Bishop Stowe, why can't they love who they want?"

He said he admires how well young people know that the church believes each person is of value. But they also know that LGBT persons are not always welcomed or treated fairly in the church, he said.

He tries to acquaint them with church teaching on the dignity of each human being, citing passages in the 1965 Second Vatican Council document Gaudium et Spes (the Pastoral Constitution on the Church in the Modern World) and other examples. He indicates how discrimination leads to dehumanization, frequently expressed in bullying, abuse, sometimes violence and even death.

"We have to listen to our young people and pay attention to things like this," the bishop insisted.

In reflecting on Matthew 12:1-14, the bishop told the LGBT assembly that in his reading of Christian morality, he finds the infinite value of the human person to be "the touchstone and foundation for determining the morality of a given act or issue. Christian morality is more concerned with the well-being and dignity of the person than with rules, norms or commandments. Jesus seems to teach this on many occasions," Stowe said.

A version of this story appeared in the May 19-June 1, 2017 print issue under the headline: Bishop Stowe leads prayer at LGBT Catholic event.