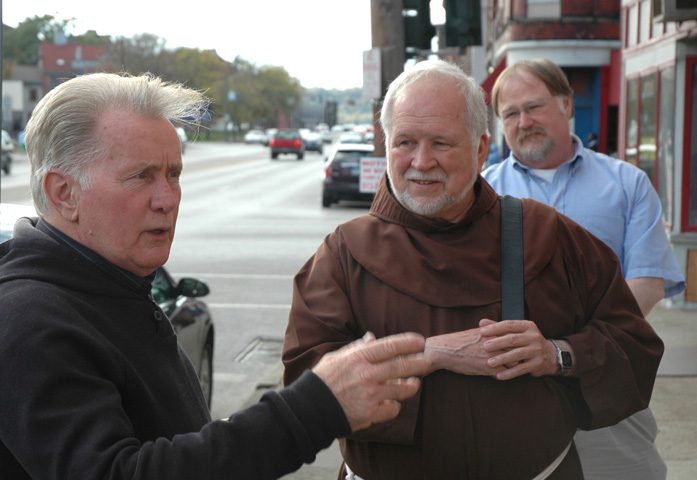 Age: 74
Who he is: Actor, producer, director
Lives in: Malibu, Calif.

Sr. Camille:  What follows is a summary of a recent conversation I had with Martin Sheen in May. It was not our first. Fr. Daniel Berrigan brought us together for the first time about 40 years ago. After attending Mass we went for breakfast on Manhattan's West Side. My cousin Sr. Stella Auricchio, CSJ, was with us, as was Martin's wife Janet and a man who had just published a book about AIDS, a disease that was new at the time.

We've reconnected now and then, at Pax Christi's sponsored Good Friday Stations of the Cross along 42nd Street and at assorted celebrations. I count myself among his many fans as he takes on interesting roles. One of my favorites was his portrayal of a U.S. president on "The West Wing." As we have this conversation (in the middle of May) we're waiting for the playing of "Grace and Frankie." I asked him what this one's about.

Sheen: The show features two male law partners, specialists in divorce, who fall in love with one another and decide to leave their wives.

That role, compared with your portrayal of President Bartlet, suggests the range of your talent.

Remembering your connection with Dan Berrigan reminds me that real life drama often exceeds that created for television or the silver screen. When were you drawn to him?

It was in 1968 when he was hiding from the police.

They were after him because of his involvement with the Catonsville Nine. With them he burned draft cards to protest our nation's involvement in the Vietnam War.

What attracted you to him?

I remember his words to a friend who was deciding not to join in the protest. He told Dan that his situation was different. He said, "You don't have any children. What will happen to mine if I go to prison?" Dan replied, "What will happen if you don't?"

Martin's own childhood was spent in Dayton, Ohio. His parents were married in 1927 and his mother had 12 pregnancies; 10 children survived. His father was a factory worker who spoke English, Spanish, Portuguese and Italian. Martin, who had three sisters, was the seventh surviving male. He grew up in hand-me-down clothes, attended Catholic elementary and high schools and from the age of nine to fifteen made spending money by caddying.

Some of his earnings helped support his movie habit. From the time he was six he was drawn to the movies, feeling an extraordinary kinship with the actors. Even as a young child, he knew he belonged in their company. Martin said, "I was like those people on the screen. I knew it. I also knew I'd be happy there."

His desire to act was tested throughout his school days. He performed in many plays and, although his father wanted him to attend the University of Dayton, Martin's heart was set on moving to New York City. Martin's father's desire for him to get a solid education was based, in part, because Martin's shoulder had been injured by forceps used to help his delivery. He would not be able to take on heavy manual labor.

But Martin followed his dream to New York City where he took on a few jobs, including working as a stock boy for American Express, the whole while looking for a way into the theater. One of his theater jobs was as a curtain puller. That netted him five dollars a week.

In Manhattan he discovered Dorothy Day and the Catholic Worker. Because he had so little money, he went regularly to eat at the table Day set for the hungry and homeless of the city.

In 1960 Martin was introduced to Janet, the woman who would become the love of his life. She had also come from Ohio and was studying art at The New School. Martin said to himself, "If she could see me in a play, she would fall in love with me."

And she did. They were married a year later. He considers his wife the most honest person he's ever known and the most important person in his life.

Another person for whom he has great affection is Pope Francis. He says, "I love him and I pray he'll last another 50 years!"

Martin's Catholic faith is very important to him. Although he was away from it for a few years, he came back in 1977 after a serious heart attack. Now he admits he can't imagine living without it. Back then he made some changes to his life. He'd developed a drinking problem and gave that up. He had to learn to be true to his separate roles: husband, father, and actor. A trip he made to India for the filming of Gandhi in 1981 made him conscious of the many suffering the miseries of poverty. He was influenced by the book, The Brothers Karamazov. He spent time in Paris and remembers the impact of St. Joseph's Church on the Right Bank, an English speaking church that Oscar Wilde had known. It became the site of his own spiritual renewal. That experience in Paris alerted him to the realization that the internationality of the church allows it to offer a home despite geographic distances.

Sheen is devoted to the church. He attends Mass in his home parish of Our Lady of Malibu. A tiny parish, it welcomed five converts at the Easter Vigil -- four women and one man. He loves the Gospel passage that describes the women going to the tomb "very early in the morning while it was still dark. …"

He admits being a supporter of the roles women take on and advocating greater appreciation of their abilities by the men who hold the primary positions within the church.

All the previous Conversations published in this column were done via Internet writings. Martin is admittedly abysmally deficient in this regard, so we met in his suite at the Waldorf Astoria during his recent business trip. He was welcoming, laughed easily and often, answered honestly, then insisted on walking me to the lobby, hailing a cab to send me home and giving me more than enough money to pay for the ride.

Martin Sheen, at 74, is filled with life and continued successes and still unfulfilled dreams.