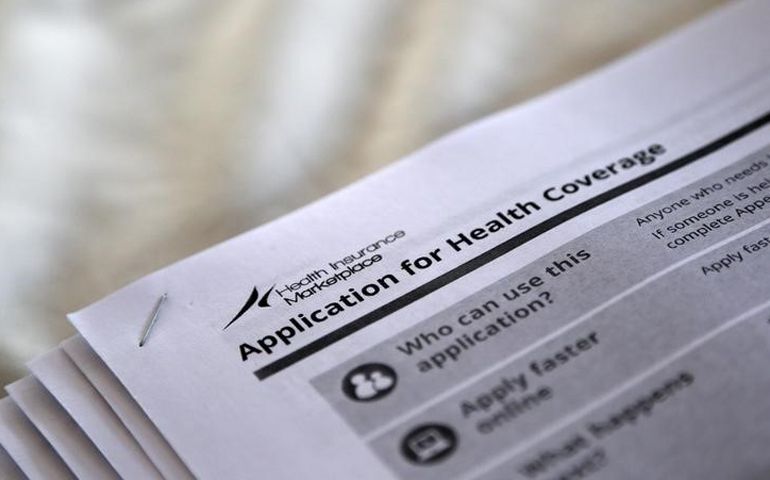 The federal government forms for applying for health coverage are seen in this 2013 photo. (CNS/Reuters/Jonathan Bachman)

The GOP proposal to repeal and replace the Affordable Care Act runs afoul of Catholic social doctrine, as I explained yesterday. It also will have a potentially catastrophic effect on Catholic health care. Every bishop in the country who has a hospital in their diocese needs to pay attention and speak out to stop this repeal and replace train before it gets further down the tracks.

"Before the ACA, the government had two programs that helped hospitals which delivered health care to the indigent," Daughter of Charity Sr. Carol Keehan, president of the Catholic Health Association, explained to me in a phone interview. "The Disproportionate Share Hospitals program, or DSH, gave additional payments to hospitals that, as the name implied, delivered a disproportionate amount of health care to the poor. As well, Medicare reimbursements to hospitals were adjusted to give more to hospitals that provided such care."

In the Affordable Care Act bill, as the number of people without health insurance went down, the hospitals' expense in charity care and bad debt was projected to go down. As the Affordable Care Act took effect, the number of poor people without health care did decline, especially in those states that expanded their Medicaid programs. So, the moneys for reimbursement awarded to DSH hospitals began declining and was scheduled to continue to decline. The Medicare reimbursement rates also began to change. The GOP proposal, which the Congressional Budget Office predicts will return 24 million Americans into the ranks of the uninsured in the next ten years, makes no provision to revive the DSH program. "If you kill the ACA, will these Medicare and DSH reimbursements be replaced?" Sr. Carol asks. "When has that ever happened?"

These problems with the GOP plan would be enough to cause the Catholic Health Association president to oppose the changes, but Sr. Carol's biggest concern is something else. "I have to say right up front, that my biggest concern is those people who never had insurance before, but who now have it. It may not be the best insurance but it is something. You don't just wipe these people off the rolls."

Sr. Carol explained to me how charity care works. "People come in with their rent receipts and their pay stubs. They come to a clinic or to the hospital hat in hand. It is an utter assault on human dignity," she says. "To be a parent, and to not be able to get health care for your children, I can't think of a bigger assault on human dignity." She is concerned that people who have to go through the process of accessing charity care will stop getting preventive health care. "They end up in the emergency room because it is so difficult to get preventive or other care if you do not have any insurance."

"Indigent care is why we got started in Catholic health care," Sr. Carol said. "It is still a central part of our mission."

It is appalling to hear House Republicans talk about how lousy Medicaid is. Yes, Medicaid is not great health insurance, but if you do not have any heath insurance, it is better than nothing. Even if it only covers 80 percent of what you need, that is better than zero percent. In those states that expanded Medicaid under the terms of the Affordable Care Act, Catholic hospitals have been able to deliver better quality care to large numbers of poor and working poor people, without forcing them through the rigors of becoming eligible for charity care. In those states that did not expand Medicaid, Catholic and other hospitals are already struggling. "Now, the GOP proposals will make all states like those that did not expand Medicaid," Sr. Carol explains. "Hospitals will struggle as never before."

In a recent Los Angeles Times article, Noam Levey demonstrated the political irony of the GOP proposals: The negative effects will fall primarily on those working poor, largely rural, and elderly voters who put Trump in the White House. "Among those hit the hardest under the current House bill are 60-year-olds with annual incomes of $30,000, particularly in rural areas where healthcare costs are higher and Obamacare subsidies are greater," Levey wrote. "In nearly 1,500 counties nationwide, such a person stands to lose more than $6,000 a year in federal insurance subsidies. Ninety percent of those counties backed Trump, the analysis shows. And 68 of the 70 counties where these consumers would suffer the largest losses supported Trump in November."

Irony is no comfort when you are in danger of losing your health insurance. Irony is no comfort when you are a Catholic hospital administrator trying to stay true to your founding mission of bringing the healing ministry of Jesus to the poor and the indigent. Irony may prove to be no comfort to the GOP legislators who are choosing ideology over the interests of their constituents: Constituents vote and ideologies do not.

The U.S. Conference of Catholic Bishops issued a letter, signed by four committee chairs, outlining the moral concerns the bishops believe should frame the policy decisions facing Congress. I am not sure why "Honoring conscience rights" was listed before concern for access to affordable care for the poor. And, it is unclear why the bishops have not simply and openly stated their opposition to the GOP proposal as the Catholic Health Association has done when it is so obvious that the proposal runs afoul of the very moral criteria the bishops articulate. As in the case of their relatively weak statements opposing Trump's immigration proposals, it appears that some at the bishops' conference think they can work with the Republicans and the Trump administration and not get burned. I would bring a fire extinguisher on this one: The bishops will get burned.

I do not believe we should ever give a Democratic politician a pass if they are wrong on abortion just because they are right on a lot of other important issues. But, the reverse is also true: Republicans who are right on abortion shouldn't get a pass on other issues, least of all an issue that is so intimately tied to human life and dignity as health care. Sr. Carol knows the policy implications inside out but, more importantly, she knows how integral the mission of Catholic health care is to the lives of millions of Americans, especially the poor and the vulnerable. Let's hope our bishops find their voice too.

Court rulings on Obamacare give neither politcal party advantage