The death of Fidel Castro 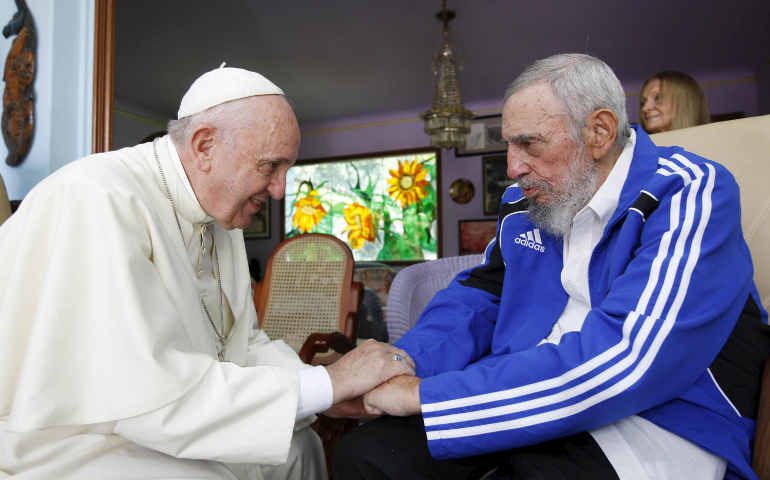 In public, American officials in both church and state felt the need to deploy profound ambivalence about the death of Fidel Castro. They affirmed his was a significant life, but declined comment on whether his significance was for good or ill. Archbishop Thomas Wenski of Miami stated:

In the Old Testament Book of Ecclesiastes, we read: "...both the just and the wicked God will judge, since a time is set for every affair and for every work." Fidel Castro has died. Now he awaits the judgment of God who is merciful but also just. His death provokes many emotions —both in and outside the Island. Nevertheless, beyond all possible emotions, the passing of this figure should lead us to invoke the patroness of Cuba, the Virgen of Charity, asking for peace for Cuba and its people.

"Both the wicked and the just God will judge," but the archbishop have no hint as to which he though Castro was. President Barack Obama displayed a similar knack at avoiding either moral approval or disapproval for the life that had ended. His statement read in part:

We know that this moment fills Cubans — in Cuba and in the United States — with powerful emotions, recalling the countless ways in which Fidel Castro altered the course of individual lives, families, and of the Cuban nation. History will record and judge the enormous impact of this singular figure on the people and world around him.

Beware of Yankees offering thoughts on Latin American politics is wise counsel, and so the reticence of both the archbishop and the president was as welcome as it was understandable.

The situation of the church on the island has changed enormously in the last few decades. Archbishop Roberto Gonzalez of San Juan Puerto Rico recalled visiting Cuba for the first time in 1989 as a newly ordained bishop. Then, the churches were "practically empty," he told me by email. "Since that time, I have visited Cuba more than 60 times. Each visit has been to offer fraternal solidarity in a variety of ways. I have great admiration for the Church in Cuba," Gonzalez continued. "It is a Church of living martyrs. Most priests and religious do not receive a salary. The people and the bishops provide them with food and basic necessities. The catechists have paid a high price for their service to the Church. Grandparents have passed on the faith. The bishops are icons of the joyful hope that is ours in the Risen Lord. The faithful, strong as oaks!"

Gonzalez has watched the development, and improvement, of the church's life on the island closely. "In the '80s there was a watershed assembly of bishops, clergy, religious and laity of all the dioceses of Cuba. Priests can now visit hospitals and prisons. Many homes serve as small ecclesial communities. Most parishes have active Caritas [Catholic Charities] programs. There are a few church publications. There are public processions. Many political prisoners have been released, although many more should be released," he told me. "All of this was unthinkable when I first visited Cuba in 1989. Things that were prohibited during the first decades of the Cuban Revolution are now evangelizing efforts of the Catholic Church in Cuba. Obviously this is the result of many dialogs at different levels over many years and reflects how the government of Fidel Castro has developed over time."

Most of us did not have the up close view of the archbishop. Growing up, I was aware of the lousy history of my country with our neighbors to the south, and I gradually let this bleed into a kind of sympathy with Fidel Castro and his revolution. My favorite talking point: He brought better medical care to his people than we in the U.S. had brought to ours. There was the Bay of Pigs and the CIA attempts on his life. And I knew that the Catholic church on the island opposed the U.S. embargo.

What I confused was a moral assessment of the Castro regime with the development of an appropriate response to that regime. The embargo may have been worth a try in the early '60s, but by the '70s it was obvious that it had achieved the opposite effect from the one intended. Castro was able to blame the economic failures of his regime on the embargo. He could always suppress nascent opposition to his rule by invoking the Yankee bogeyman just 90 miles away.

In the event, Castro did not need a bogeyman to suppress his people. In this enterprise of evil, he was expert. In the 1990s, I became friendly with a Cuban dissident who had come to the States for surgery and needed a place to recuperate. I had an extra bedroom. While he was here, there was a roundup of dissidents on the island. My friend's family was not arrested, and I expressed relief at that fact. My friend explained that it was really just as bad not being arrested because the families of those arrested would look at those who were not with suspicion, wondering if they had evaded arrest by collaborating with the regime. This, I understood, was the horror of totalitarianism, not just the real blood on its hands, but its ability to reach into families and friendships and disrupt them to sow distrust in intimate circles, to destabilize the most basic bonds of fraternity as a means of maintaining power and control.

Castro and his revolution achieved many things for the Cuban people, but who is to say that those things would not have been accomplished without the repression? The Cuban people are entrepreneurial, passionate; they highly value education. Might not they have achieved those things under a regime characterized by social democratic norms? Certainly, the tyranny that preceded Castro would not have achieved much for the Cuban people, but were these the only options, Castro or Batista? Under both men's rule, yes, those were the only options. That is what made them dictators.

The fact that Castro was a dictator who practiced great evil, however, should never have meant that the U.S. would have nothing to do with him. Others disagree. "As Fidel Castro's body is being prepared for cremation and a state funeral, thousands of Cuban people of faith and democracy activists are being detained and arrested in record numbers by the Cuban secret police," Kristina Arriaga, executive director of the Becket Fund for Religious Liberty, told me this weekend. "His death marks the end of an era but his repressive regime lives on. It's time for the world — and particularly the U.S. — to stand with the Cuban people and not, as it has most recently done, with the Castro regime." Arriaga's passion for freedom was born from freedom's lack, and it is impossible not to admire her for it. And I would agree that the Obama administration should have demanded the release of more political prisoners on the island and more freedoms for the Cuban people as the price of our official recognition. But the diplomatic stalemate was, well, stale; it wasn't working. No one should fault Obama for trying.

Nor did Castro's ruinous human rights record mean that the church should have spurned a relationship, however fraught and limited, with the bad man. Apart from the improvements in the situation of the church, geopolitics is usually, not always, better served by making common cause where possible. The U.S. once counted Joseph Stalin as an ally, and his crimes were of a different order of both magnitude and cruelty from those of Castro. The church not only hoped for more space in civic society to pursue her mission here and now, but also to serve as a bridge to a better future. Some of my Cuban friends were angry that the church engaged Castro, but their anger was misplaced. The line between co-existence and complicity is sometimes as narrow as the streets of Old Havana, but it is a definable line, one to be walked with care and caution, but to be walked nonetheless in times of duress.

"When I visit churches now in Cuba they are filled to capacity, especially with many youth!" writes Archbishop Gonzalez. As the regime loses its iconic founder, the church will be a source of stability and hope, a prod for further reform and a champion of the common good. It is in the pews of the churches of Cuba that a more hopeful future may be born.

People | The death of Fidel Castro

How Pope Francis' diplomacy may change everything, not just US-Cuba relations