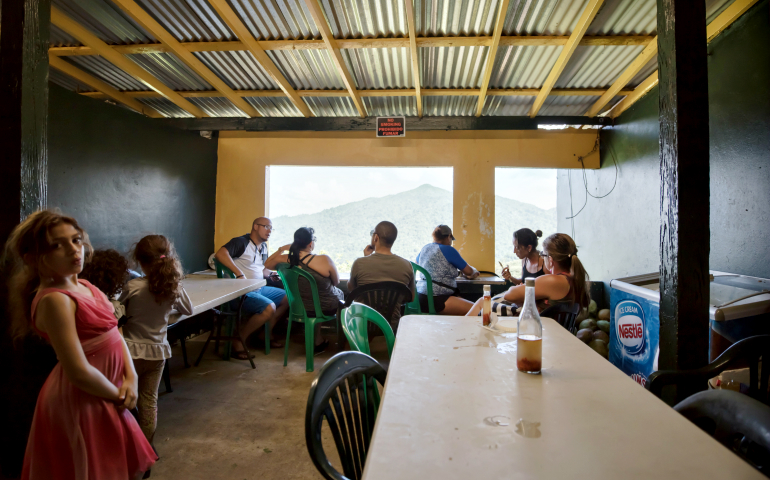 Today, the Fiscal Control Board for Puerto Rico meets in San Juan. The board was established by bipartisan legislation last year, to help deal with the debt crisis on the island. Four of its seven members were appointed by the GOP leadership in Congress and three were appointed by the Democrats. The board has worked in a bipartisan fashion and appears to have reached consensus that the debt must be drastically reduced.

"Conceivably, this could be one of the largest debt-relief initiatives in the history of fiscal crises if the board remains true to the goals it has set for itself," Eric LeCompte, executive director of Jubilee USA, told me. LeCompte is in San Juan for the meeting and has played a leading role helping to guide religious leaders on the island as they fight to prevent austerity measures that would target the poor.

"The United States Conference of Catholic Bishops continues to show phenomenal leadership, not only on resolving the crisis in Puerto Rico, but on global debt issues, too," said LeCompte. "The church's consistent policy stance flows from sustained moral reflection on these issues of debt and development."

The board has publicly called for the debt to be cut by 79 percent. That is a big number, but without a big number, there is no hope for the island's economy.

Additionally, LeCompte says the religious leaders are pushing for measures that will prevent the crisis from repeating itself and will address the crushing poverty on the island now, such as increasing the child tax credit on the island; linking the performance of future bond sales to growth of gross domestic product, which would make predatory lending impossible; and addressing the health care disparities on the island.

Earlier this month, Archbishop Roberto González of San Juan and the Rev. Heriberto Martínez Rivera, secretary general of the Bible Society of Puerto Rico, sent a letter to leadership in Congress, asking them to support legislation that would implement the recommendations from a bipartisan commission that addressed ways to cope with the endemic poverty on the island. For example, the letter stated:

Please pass legislation to fix Medicaid funding in Puerto Rico. The island's Medicaid program is currently operating under a block grant which will soon run out. Future payments are set to be capped at barely more than a quarter of what Puerto Rico needs. Puerto Rico should be reimbursed based on per capita income, as states are. Over 40% of the island's population relies on Medicaid funding. Puerto Rico's health care system will be at significant risk of systemic failure if Congress does not act.

The recommendations from the commission, and backed by the religious leaders, almost were added to the doomed effort to repeal and replace the Affordable Care Act. But they are now formulated into legislative language and ready to be affixed to any new pieces of legislation.

The poverty on the island is bad and it is getting worse. "The streets of Old San Juan and of many towns throughout the countryside of Puerto Rico are filled with empty storefronts which were once flourishing family businesses," González told me in an interview Wednesday. "A Puerto Rican employee at the Orlando airport tells me that his heart is broken everyday as he sees entire families deplane from Puerto Rico in search of jobs simply to survive. Three years ago there were 500 cardiologists in Puerto Rico, and today there are approximately 200. Child poverty hovers at 60 percent on the island. The signs of increasing poverty are growing everywhere in Puerto Rico."

González knows the island as a pastor, and sees the poverty in his parishes and on the streets of the island. But the anecdotes he sees are confirmed by a study released by the Pew Research Center this week. Among the most frightening: "Nearly six-in-ten Puerto Rican children on the island (58%) lived in poverty in 2015, as did 45% of island-born children living on the mainland. Only 30% of Puerto Rican children born on the mainland were in poverty."

The study also confirms what the airport worker in Orlando, Florida, told the archbishop about people fleeing the economic distress on the island. "Between 2005 and 2015, Puerto Rico had a net loss of about 446,000 people to the mainland, with job-​related (40%) and family or household reasons (39%) cited as primary causes among a plurality of those leaving," the report states.

The PROMESA legislation placed a moratorium on lawsuits by creditors against the government on the island, and that moratorium expires in May, so today's meeting of the Fiscal Control Board is important. If no progress is made toward a settlement, the board could send the island into bankruptcy court proceedings and bondholders could lose even more than they would in a negotiated settlement. The stakes are high.

Originally, when the control board was first appointed, there was widespread disgust on the island. Everyone knew they needed such a group of people to make the tough decisions, but it was still seen as an insult to the island's sovereignty, always the touchiest political topic in Puerto Rico. Those who favor statehood have used the crisis to argue their cause, as have those who oppose statehood. Gradually, however, people have come to realize that the control board may craft a resolution to the fiscal crisis, and the people of the island can continue to argue about the sovereignty issue for another 100 years.

No progress would have been made in addressing the needs of the poor, however, were it not for the leadership of González and Martínez ​Rivera. And they credit the expertise and relentless lobbying by Jubilee USA and the U.S. bishops' conference in helping them turn a moral argument into a set of practical political and fiscal proposals.

I have been highly critical of the bishops' conference in the past, but on this issue, they deserve a lot of credit. Let's hope the control board listens to them and takes steps to protect the poor as much as possible from the economic crisis on that beautiful island.