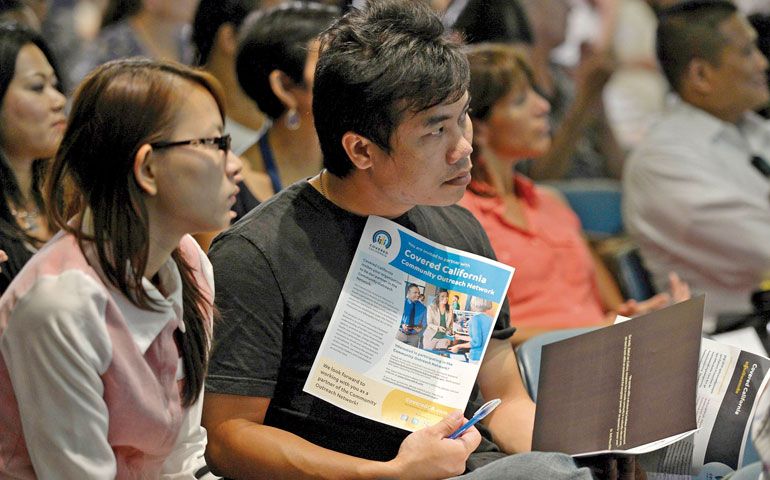 In an article for the U.S. Conference of Catholic Bishops' "Life Issues Forum," Richard Doerflinger seeks to set forth "the facts" about abortion coverage under the Affordable Care Act. To be sure, Doerflinger, the point man for the bishops' conference on pro-life issues, is exceedingly knowledgeable about these matters, and his commitment to the pro-life cause is as admirable as it is obvious. But knowledge and commitment also require a sense of perspective and balance, without which you get a tendentious article like the one he wrote.

In it, Doerflinger warns: "Most secular insurers will probably cover elective abortions (unless forbidden by state law), as they did before passage of the ACA, because they think abortion is cheaper than childbirth (and far cheaper than live dependents who may need care as they grow up)." Of course, if this is true, then the Affordable Care Act is a profoundly anti-abortion law because it will extend health insurance to millions of poor women who do not currently have it and, under the terms of the law, all plans must cover the costs of pregnancy. Fewer women will lack the means to pay for pregnancy, which means fewer women will feel compelled to have an abortion for economic reasons.

Doerflinger argues that federal subsidies for low-income enrollees will go to pay for plans that cover abortion. The Affordable Care Act actually requires that individuals who get coverage for abortion must pay for it themselves, not with the subsidy. Additionally, in the context of Catholic education, the church routinely argues for vouchers that, like the Affordable Care Act subsidies, give money to low-income individuals who then spend it as they wish. Doerflinger's argument here makes sense only if you buy into the idea that "money is fungible," and consequently, any subsidy that helps pay for a plan frees up money to pay for abortion coverage.

But this is what happens now. If you have a plan that does not cover abortion, but your insurance company has plans for other customers that do cover abortion, your premium check goes into the bank account of the insurance company from which that same company cuts checks for abortions to their other customers. If money is fungible in a government account or in an individual's account, it is also fungible in an insurance company's account. Indeed, that is sort of the whole point of insurance, isn't it? Your premiums cover other people's medical needs and, when you need it, their premiums cover your expenses.

"If you find yourself in one of these abortion-including plans, you will be required to pay a surcharge for other people's abortions," Doerflinger writes.

No one will "find" themselves in a plan that covers abortion. You get to choose a plan that does or does not cover abortion.

But, Doerflinger warns, "the ACA forbids the insurer to give you any special warning that your plan covers abortions. The abortion coverage can only appear in the fine print along with all other 'services.' "

One of the achievements of the act is to require insurance companies to list services and benefits in plain language. Doerflinger fails to note that while insurance companies cannot "warn" their prospective customers that a given plan covers abortion, there is nothing that prevents those companies from advertising plans that do not cover abortion.

Doerflinger concludes, "In short, there will be tax subsidies for health plans that cover abortion, and many Americans will be forced by law to pay premiums for abortion itself." This is like saying that when you go to the butcher for dinner, you are "forced" to pay for the pork chops you ordered. Yes, you must pay for the chops, but only because you chose them.

As disturbing as the leading way in which Doerflinger presents his evidence is what he leaves out of his article. In an email to me, Doerflinger said he found one of my questions puzzling because "We [the bishops' conference] strongly support coverage for childbirth expenses, and have not joined any of the efforts for rescinding or defunding the Affordable Care Act overall." Seeing as his article is being published at a time when many members of Congress are calling for a defunding of the act, he might have wanted to point out that the bishops do not support such a move.

The bishops' conference and other pro-life groups failed to attach the language of the Hyde Amendment to the Affordable Care Act. (The Hyde Amendment has long barred the use of federal dollars to cover abortion in federal programs such as Medicaid and Medicare, except in cases of rape, incest and when the life of the mother is at stake.) I wish Congress had done so, although the failure to do so did not, in the estimation of many, warrant opposing the act as the bishops did.

But the act has resulted in something the bishops' conference could not have achieved on its own. The attitude, if not the law, behind the Hyde Amendment has spread from government health insurance programs into the private sector. The act's requirements that insurance companies segregate funding for abortion from other funds, the cumbersome process of setting up these distinct accounts, the requirement that the state-level exchanges have at least one plan that does not cover abortion, the requirement that enrollees who receive a subsidy write a separate check for their abortion coverage -- all these provisions indicate to the culture that abortion is not like other medical procedures. The fight to include the Hyde language in the Affordable Care Act may have been lost in Congress, but the underlying moral argument is now being extended throughout the country. That is a good thing. It would have been worth it for Doerflinger to have mentioned that.

The bishops' conference is well-served by having someone with Doerflinger's intelligence, knowledge and commitment advising them. He can spot a worst-case scenario a mile away. But while sound judgment must take account of worst-case scenarios, policy decisions should not be based solely on worst-case scenarios. It is that failure to provide perspective that has, I fear, clouded the conference's decisions on a range of issues. And that is not Doerflinger's fault. It is the bishops themselves who must decide whether and how to restore a sense of balance to the policy stances they take.

Off on the Wrong Feet

The Scandal at UVA