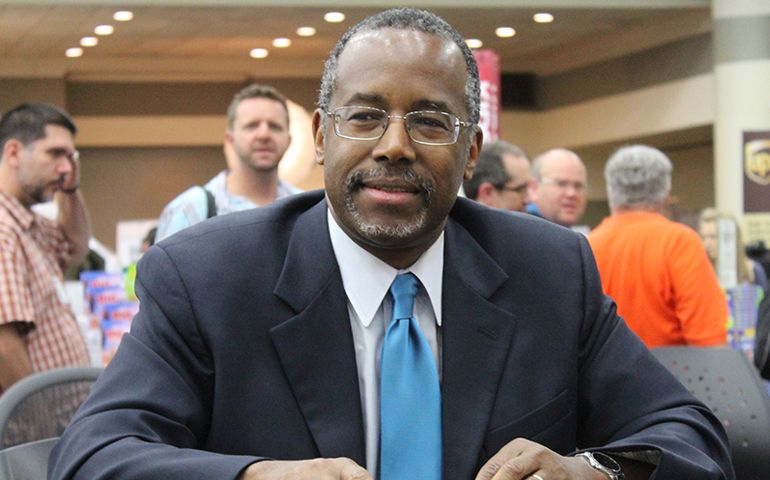 Yesterday, President-elect Donald Trump nominated Dr. Ben Carson to be the secretary of housing and urban development (HUD). The appointment is strange, not least because Carson has no previous experience in dealing with urban issues apart from having grown up in a city, a qualification that would make millions of Americans eligible for the appointment.

Dr. Carson is an extraordinary surgeon; Of this, there is no doubt. You do not get to become head of pediatric surgery at Johns Hopkins Hospital unless you are the best of the best. But, not all skill sets are transferable. The current leader at HUD, Julian Castro, is an able politician, but I am not sure I would want him operating on my four year old's brain.

The lack of occupational experience is only part of the problem with the appointment. A larger problem is the fact that Carson believes some things that are plainly crazy. My favorite is his belief that the Patriarch Joseph, of amazing Technicolor dream coat fame, built the pyramids to store grain. "My own personal theory is that Joseph built the pyramids to store grain," Carson told an audience at a 1998 commencement at Andrews University. "Now all the archaeologists think that they were made for the pharaohs' graves. But, you know, it would have to be something awfully big — when you stop and think about it, and I don't think it'd just disappear over the course of time — to store that much grain." Whenever anyone begins a sentence with the words, "My own personal theory is …" head for the hills. When you stop laughing about the ridiculousness of the belief, look again at his casual dismissal of the work of experts, in this case archaeologists, and then contemplate his first staff meeting at HUD.

You object that he may believe whatever he wants, so long as it does not affect his job. Indeed, our Catholic belief in the real presence of Jesus Christ in the Eucharist strikes many non-Catholics as at least passing strange. Some of his strange beliefs might affect how he assesses the challenges of his new post. Urban violence plagues many of our cities, and the ready availability of guns is an obvious part of the problem. Conservatives complain that cities with strict gun laws often have the worst violence, but that ignores the fact that because we do not erect borders between our states, no local situation to the problem of guns will work. We need a national policy making it more difficult to buy guns, and it will take some years for the results to come to fruition.

Carson, however, doesn't seem to think guns are a problem and he used an offensive, but telling, analogy to make his point. "I think the likelihood of Hitler being able to accomplish his goals would have been greatly diminished if the people had been armed," Carson told a CNN interviewer last year. "There's a reason these dictatorial people take the guns first." The offense is obvious but I say that the remark is telling because Carson is reliably Manichaean in his world view: The world is divided into the good and the evil, any attempt by the government to get involved in solving a problem is creeping socialism, the path to serfdom, to borrow a phrase, is well trod in our day. This is nonsense, but he seems to believe it.

In an appearance on "Meet the Press" last year, Carson indicated that no Muslim should be elected president. "I would not advocate that we put a Muslim in charge of this nation," he said. "I absolutely would not agree with that." When asked to clarify his remarks, he said it would be okay to elect a Muslim, provided the person rejected the tenets of Islam, about which Carson apparently thinks he knows a lot. If confirmed, Dr. Carson will take an oath to uphold the Constitution, so perhaps he might want to study it first.

HUD is currently implementing a policy devised by President Obama's administration that will require cities to study and report on racial and income disparities in housing. Carson wrote of the proposal, "These government-engineered attempts to legislate racial equality create consequences that often make matters worse." It is true that government action, like the laws of the market, often have unintended consequences, but one wonders if Carson includes the Civil Rights Act or the Voting Rights Act in the category of "government-engineered attempts to legislate racial equality."

The emerging creed of the Trump administration is a mix of crony capitalism with traditional GOP belief in trickle-down economics. That is scary enough. What I can't figure out or predict is this: This failed meta-narrative about a rising tide lifting all boats, that the crumbs from the table of the rich will fill the stomachs of the poor, this will be continually sidelined by the outrageous beliefs of some of those people being entrusted with the implementation of the vision. Is it a good thing that kookiness may be the downfall of Trump's crummy and crumby vision?