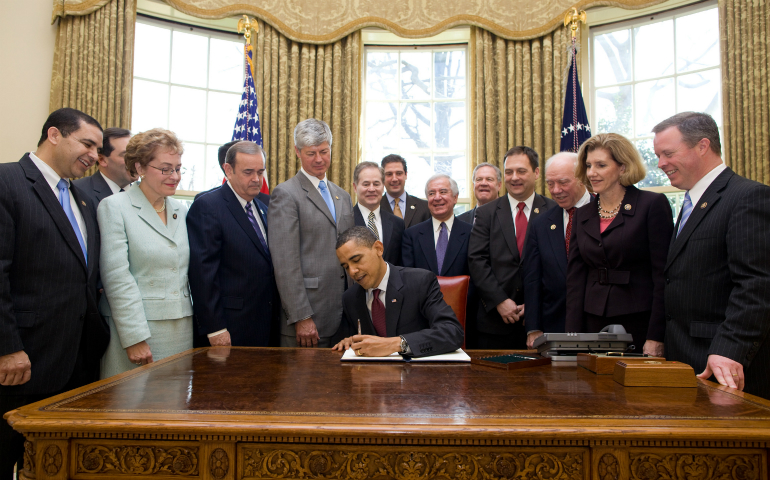 Some Democratic members of the House of Representatives stand by President Barack Obama as he signs an executive order March 24, 2010, to ensure that no federal funds are spent on abortion under the new health reform plan. (CNS photo/Pete Souza, White House)

By the end of the week, President Barack Obama will return to private life. He came to Washington eight years ago promising hope and change, but most of the hope has long since vanished, and the change he promised, always a bit amorphous and self-referential during his campaign, turned out real and consequential, but also to be a mix of good and bad. His legacy now rests in the hands of a government more thoroughly controlled by the party that opposed him than at any time in memory.

As a candidate, Obama promised to bridge the bipartisan divide and fix the dysfunction that gripped Washington. "On this day, we gather because we have chosen hope over fear, unity of purpose over conflict and discord," Obama said in his first inaugural address, although the real reason for the gathering was that the American people had chosen him over Sen. John McCain. "On this day, we come to proclaim an end to the petty grievances and false promises, the recriminations and worn-out dogmas that for far too long have strangled our politics. We remain a young nation. But in the words of Scripture, the time has come to set aside childish thing." Obama showed that he, too, could be petty, that some of the promises he made — "If you like your doctor, you can keep your doctor!" — would turn out to be false, and he seemed ignorant of the fact that that very night, a roomful of Republican adults were planning their opposition. He promised too much and consistently underestimated the entrenched and powerful interests ranged against him.

Politics is about the admixture of ideals, relationships and power, and Obama seemed incapable of sorting out the mix. He inherited an economic catastrophe, but he blinked when he had the chance to seriously remake the financial sector, adopting instead the neo-liberal economics that were so deeply implicated in the crisis in the first place. He had the opportunity to fundamentally restructure the financial sector, as Franklin Roosevelt restructured the capitalism of his day, and he could have started by prosecuting the executives of major banks who had violated several laws. Instead, he bet on Wall Street, not Main Street, and allowed the rebuilding of the banks to be undertaken by the same people who had wrecked it in the first place.

Obama pushed for universal health care, but because of his hoping to somehow bring some Republicans on board, the final law was a regulatory maze and a political nightmare. Its failure to include a public option was a critical deficit both politically and as public policy. I do not undervalue the achievement of the Affordable Care Act, something previous presidents had sought and failed to achieve. It has begun to help needy fellow citizens. But once it passed, he failed to continually sell it, leaving it to its opponents to characterize it. "Good policy is good politics" was the Obama mantra, but the policy was complicated and the politics turned disastrous: He never really recovered the political initiative after the 2010 midterm elections.

He never took the time to schmooze with members of Congress, that collection of large but fragile egos that had the power to make or break his presidency. It wasn't just the lack of face time with the president. Obama kept his campaign organization going after the election in 2008 and left the Democratic National Committee to fend for itself. His go-it-alone approach showed his utter lack of a desire to build relationships within his own party: The Democrats on Capitol Hill came to dislike him as much as the Republicans. I sympathize with the president. There are few things less pleasant than having to massage fragile egos, large or small, but it goes with the job he sought. Obama promised a political revolution, but he presided over an unprecedented decline of Democratic Party influence at the federal and state level. A president without a strong party behind him is a lonely, and ultimately far less successful, politician than he would otherwise be.

President Obama did nothing to remake the Democratic Party as more than a collection of interest groups. The theme of change was ceded to the other side by his election, and he never replaced it with anything credible and majoritarian. Most Americans who are struggling in an economy upended by globalization did not think that guaranteeing transgender kids the right to use the bathroom of their choice warranted so much attention from their president and the attorney general. In his second term, his politics became less and less focused on issues that mattered to middle America, and we have all witnessed the result. In his mind, he was the philosopher-king who knew best, summed up in the obnoxious phrase about being "on the right side of history." His focus became almost entirely Upper West Side, and certainly Valerie Jarrett wasn't going to tell him any differently. The influence of the pro-choice lobby and the LGBT-lobby was extraordinary: Planned Parenthood got a veto, while the AFL-CIO was kicked to the curb by the man who had promised to walk picket lines as president.

It was telling that Obama referred to members of the Cabinet as "my attorney general" and "my secretary of state." The two titles are, respectively, the Secretary of State of the United States and the Attorney General of the United States. By placing the first person pronoun before their titles, he betrayed a sense of governance that a former constitutional law professor should have known was misplaced. It fed the perception of him as aloof and extending his executive power beyond its proper limits, two perceptions that are politically lethal.

On the domestic front, then, Obama's legacy is a series of missed opportunities and fragile successes. His stimulus bill in 2009 did not guarantee high-speed internet in those rural parts of the country that would select the successor who is bent on overturning his policy achievements. The "shovel ready" jobs did not materialize. Obamacare will be more difficult to unravel than the Republicans think, but unravel it they will. The same could be said for his efforts to move the country towards sustainable energy: He never found the arguments and the policies that would create the kind of popular support as to make such a move politically sustainable. He was not wrong about the scandal of our insane gun laws, but he should have been smart enough to realize that the dog is still not ready to hunt.

In foreign policy, Obama's legacy is even more fraught. The Iran nuclear deal was his finest achievement to be sure, but one looks in vain for other achievements. His unwillingness to enforce a no-fly zone in Syria allowed the genocide to continue, Russian influence to grow, and the radicalization of the country to exponentially intensify. He kept returning to his effort to close Gitmo, which would be a fine thing to do, but was hardly a critical priority. The Trans-Pacific Partnership was a sop to Big Pharma and a death knell to fragile Central American economies: It deserved to die: Could not the political capital expended on that have been put to better use? It is difficult to look to a single part of the globe apart from Iran's nuclear reactors and see any successes.

President Obama's relations with the Catholic church were fraught from the beginning, and much of the blame rests with the U.S. bishops, most especially the late Cardinal Francis George. He did not like Obama and greeted the new president with a foolish campaign opposing the Freedom of Choice Act (FOCA), complete with bulletin inserts, a postcard campaign and homily helpers, denouncing Obama for something he was never going to do. This was followed by the far too many bishops who denounced the University of Notre Dame for inviting the new president to their graduation and giving him an honorary degree. Then there was the mess over the contraception mandate, in which both sides were to blame. Obama can be forgiven for thinking he was never going to win with the bishops, but that does not excuse him from failing to see the importance of civil society to a healthy democracy and, consequently, doing more to allow the key actors in civil society, like churches, more autonomy. The goal of equality, a worthy goal, became a bulldozer that plowed over other important social goods.

Unlike the last Democratic president, the Obama White House was entirely free from personal scandals or shady conflicts of interest. For eight years, the president has provided the entire country with the picture of a model father and husband. As the first African-American president, his personal probity and dignity under attack was especially important, not just for him, but for all other black politicians who will come after him.

On election night in 2008, like many Americans, I was overjoyed that our nation had overcome its historic racism sufficiently to elect our first black president. I cried. It was, and will always be, a good thing the American people did that year. But the candidate of "Yes we can" never paid much attention to the "we" in his own campaign theme, and, after eight years, he couldn't.