How does the Civilta Cattolica article challenge the left? 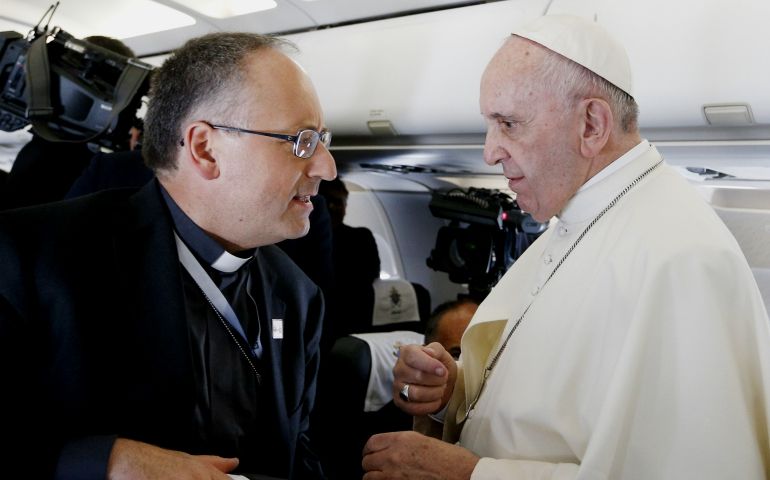 Whatever else it accomplished, the Civiltà Cattolica article by Jesuit Fr. Antonio Spadaro and the Rev. Marcelo Figueroa on the alliance between conservative Catholics and evangelicals in the U.S. has spawned some of the most interesting conversations I have had in a long time. Obviously, many of those conversations have looked at the response to the Civiltà article. I wrote about that Monday. But in the next couple of days, I want to unpack some of the deeper discussions, starting today with an attempt to answer this important question: How does the Civiltà article challenge the Catholic left?

Toward the end of the piece, the authors write:

Francis radically rejects the idea of activating a Kingdom of God on earth as was at the basis of the Holy Roman Empire and similar political and institutional forms, including at the level of a "party." Understood this way, the "elected people" would enter a complicated political and religious web that would make them forget they are at the service of the world, placing them in opposition to those who are different, those who do not belong, that is the "enemy."

While these words conclude an examination of extreme conservative elements, you can find some of these same attributes on the religious left.

The phrase "activating a Kingdom of God" brings to mind more than a couple of ideas and attitudes found on the left. Remember the "nuclear freeze movement" of the 1980s or look at its counterpart today? There is a confidence that if these admittedly horrible weapons were done away with, we will have "activated the Kingdom," at least in part. This is, at best, naive: Hundreds of thousands died in Vietnam and Afghanistan and Iraq without recourse to nuclear weapons.

Insofar as a commitment to disarmament is an expression of Christian pacifism, I commend it highly, but one of the notes of Christian pacifism is a willingness to suffer and that willingness is the opposite of the breathless, optimistic sunniness one often finds among activists on the Christian left. I am all for lessening the number of weapons, nuclear and otherwise, but such a reduction will not bring about the eschaton.

A "complicated political and religious web" exists on the left also. There are Catholics who will refrain from speaking out against a Democrat because "it will only help them [the Republicans]," committing the same kind of Manichaean mistake that the Civiltà piece so deftly identified on the right. I have watched people who know better refrain from speaking frankly to people with power because they do not want to risk not being asked back, risk losing access to that power.

And there is the whole issue of funding. In recent years, a lot of money has been spread around the Christian left to groups who were willing to speak out against their anti-LGBT coreligionists. I suspect most of the recipients of that money would have been happy to speak on behalf of according basic rights to the LGBT community without that funding, certainly to support non-discrimination laws and the such. But the funding has had the distorting effect of focusing far more attention on issues of significance to a small percentage of the population at the expense of other issues of equal or greater significance to the body politic as a whole.

That said, in my experience, you are far less likely to find people on the Christian left who "forget they are at the service of the world." It is remarkable how many people in positions of responsibility in Catholic left publications and think tanks lived at a Catholic Worker house or joined the Jesuit Volunteer Corps or worked with the Peace Corps. They may or may not go on to develop inside-the-Beltway-sized egos, but they know what it is to get their hands dirty in the real world.

Another point of challenge for the left, as for the right, is the tendency to link moral argument to specific policies and parties. Spadaro and Figueroa write:

Which feeling underlies the persuasive temptation for a spurious alliance between politics and religious fundamentalism? It is fear of the breakup of a constructed order and the fear of chaos. Indeed, it functions that way thanks to the chaos perceived. The political strategy for success becomes that of raising the tones of the conflictual, exaggerating disorder, agitating the souls of the people by painting worrying scenarios beyond any realism.

Religion at this point becomes a guarantor of order and a political part would incarnate its needs. The appeal to the apocalypse justifies the power desired by a god or colluded in with a god. And fundamentalism thereby shows itself not to be the product of a religious experience but a poor and abusive perversion of it.

There are those on the left who are capable of sketching apocalyptic scenarios also. To be sure, there really are situations in which a policy can lead to horrific outcomes. The current debate over health care is an obvious example. Is it "apocalyptic" to point out that without access to health care, more people will get very ill, and very ill people will die sooner than they would if they had access?

A distinction needs to be made always when people with religious motivations enter into the political arena, the distinction between people whom we think are wrong and those whom we think are bad. I think Speaker Paul Ryan is wrong, but I do not think he is a bad person. I think he has drunk too deeply at the well of libertarian thought, believes some things that are certainly not compatible with Catholic social doctrine, but I do not think he is willfully misleading people, including himself.

Sometimes, people on all sides fail to make such distinctions and then the debate becomes vitriolic in ways it shouldn't and ad hominem attacks replace arguments based on information. Save denunciations of a person, as opposed to an idea, for those times when it is needed, as in confronting President Donald Trump!

There are also those on the left who are tied to specific policies in ways that prevent experimentation and potential improvement. I am not in favor of cuts to Medicaid or Medicare in the absence of something to cover those currently enrolled in those programs, but I am in favor of attempts to improve them. I favor allowing states and municipalities to experiment with different programs, and recognize that our friends on the right often talk about subsidiarity for this or that federal program but there are no Republican governors or mayors lining up to try to tackle the problem the federal program was designed to address. That said, the fact that a political opponent is insincere, or wrong-headed, or even malicious does not require us to ossify.

In sum, while I understand the desire of those on the left to celebrate the Civiltà piece, and have joined in that celebration myself, every day is a good day for an examination of conscience. As I discussed Monday, there are problems on the Christian right that are unique to them, but there is also plenty in the worldview of Francis to challenge those of us on the left. One of the real blessings of religion in civil society is that it provides a firm foundation from which to critique that society, and while self-criticism can be hard, it is also necessary.

Tomorrow, I shall continue this discussion.

Politics | How does the Civilta Cattolica article challenge the left?