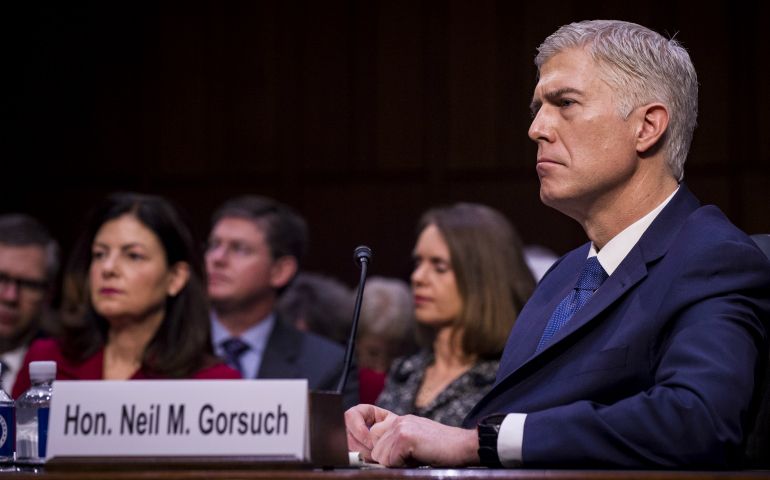 Liberal interests groups and some senators are all in a lather because Senate Majority Leader Mitch McConnell is determined to employ the "nuclear option," changing the Senate rules to bar a filibuster of Judge Neil Gorsuch's confirmation vote.

The Center for American Progress sent out an email alert quoting Sen. John Cornyn, who said changing the rules would "end the Senate as we know it." The email alert included the hashtag #ResistGorsuch.

Sen. Dick Durbin of Illinois said, "It breaks my heart to find us in this position."

The Washington Post editorial board argued that the Senate was on the brink of "a historic mistake."

Bosh. The Democrats and liberals should bid good riddance to the filibuster.

First, if words have meanings, and they do, Democrats should normally be opposed to any parliamentary procedure that is as obviously anti-democratic as the filibuster. It frustrates majority rule, requiring a super-majority of three-fifths of the senators to let a proposal come to a vote.

Second, the Senate is already a highly un-democratic body. Rural, low-population states like Wyoming and Alaska have as many senators as large states like California and Texas. When the Constitution was written, the Senate was intended to represent the states, not the people. Senators were originally elected not by popular vote but by the legislatures of the states. In the 18th century and until the Civil War, America really was a collection of states. As Shelby Foote, the great historian of the Civil War said, that war "gave us an is." Before the Civil War, people said "the United States are" After the war, it became "the United States is." The structure of the Senate is a holdover from a time that is long past.

Third, while it is true that we live in a hyper-partisan time, and the filibuster would seem to encourage bipartisan consensus, keeping the filibuster or not is unlikely to take the partisan edge off our politics. The divisions within the Senate reflect the divisions within the country. Those divisions are real, and it will require a party capable of articulating a breadth of vision to overcome them. It is not clear that an ability to devise and utilize arcane parliamentary procedures is conducive to the creation and articulation of such a vision. Franklin Roosevelt was able to enact the New Deal because he had a super-majority of Democrats in Congress. Large decisions should require a super-majority. Our country needs to make some large decisions. That kind of overwhelming support must come from the ballot box, making parliamentary rules irrelevant. The idea that the filibuster fosters comity among the members is ridiculous. Who can speak of comity when you are dealing with Sen. Mitch McConnell? Ask Judge Merrick Garland about the extent of McConnell's comity.

Fourth, and perhaps most importantly, the filibuster inhibits action, and the Democrats are the party that sees government as playing a positive role in addressing and meeting the needs of society. How many times has the minority been able to frustrate effective action by filibustering a bill? The Republicans prefer a government that does less, and so the use of the filibuster fits with their overall stance: They want to inhibit action by the government. Democrats will only benefit for years to come if the filibuster is consigned to a historical footnote.

In the present case, it would be a lovely thing if we could return to the days when nominees to the Supreme Court were routinely approved by overwhelming margins. But, as the high court has assumed a larger role in the structure of governance, and as the legal profession has divided itself into competing ideological camps, that lovely thing is like the horse and buggy. It isn't coming back anytime soon. Some special interest groups care more about Supreme Court nominees than anything else. Presidents know they need to select the youngest and most ideologically severe nominee they think they can get through the Senate, or they risk the wrath of their own base.

Judge Gorsuch's views are far to the right of what I would seek in a Supreme Court justice, although an email from the Democratic National Committee suggesting he will be a "rubber stamp" for President Donald Trump seems excessive. I actually think Gorsuch could stand athwart some of Trump's more outlandish ideas, and he certainly would resist an encroachment of executive authority upon constitutionally guaranteed rights.

The "rubber-stamp" analogy, however, tells you how conventional Democratic Party thinking has become. When was the last time you actually used, or even saw, a rubber stamp? I wonder how many people know what a rubber stamp actually is. Why not say he will be "a puppet" or "a marionette"? The last time I worked on a campaign, way back in 2004, I raised this point when our campaign was told to accuse our Republican opponent of being a rubber stamp for George W. Bush. I asked the people from Washington who so advised us if they had ever used a rubber stamp. They hadn't. Neither had most voters. Metaphors work best when they are familiar to the targeted audience.

The Democrats have bigger problems, however, than those of nomenclature. They continue to fail to see the forest for the trees. They sometimes get their messaging right, as in the health care debate, but other times they are so busy doing the bidding of Wall Street and Planned Parenthood, they seem unready to exploit the many weaknesses of the Trump administration. A Supreme Court nomination battle only highlights the degree to which they are beholden to abortion rights and gay-rights groups. I do not see that changing anytime soon. But, at least they should have the wits to see that the death of the filibuster is a good thing for them in the long run. Let it go.

Editorial: All we really needed to know about the filibuster we learned in kindergarten