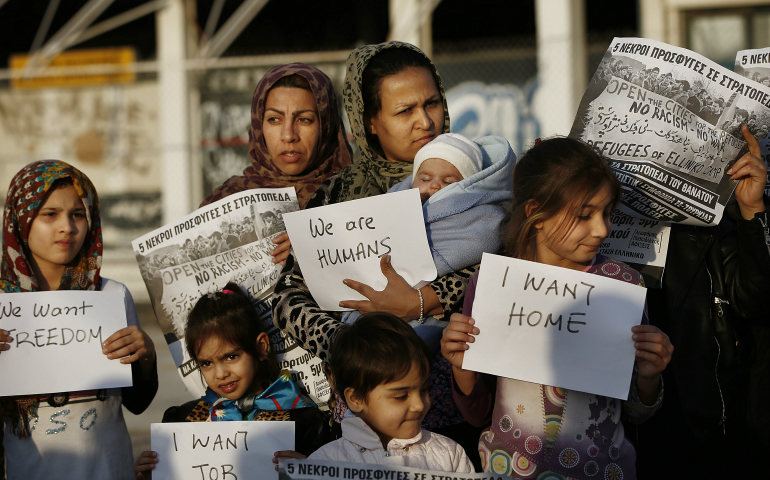 Will it work? In my last three posts, I set forth three points of reference for understanding Pope Francis' pontificate as he begins his fifth year: the centrality of mercy, ministry to the poor and accompaniment. I made the case that these form the foundation for the reform the Holy Father seeks for the church. (I could have added discernment, but for U.S. Americans, I think that can only come after accompaniment becomes a more widespread ecclesiological reality.) Now we must face the question: Can Pope Francis succeed in reforming the church?

A solid case can be made that he is already succeeding. Can anyone imagine that, after Pope Francis, synods will go back to being rote affairs in which there is no genuine dialogue? Will a future pope be credible if he even tries to order edicts from on high with no consultation and only a set of syllogisms by way of explanation? Can we imagine a future pope bringing back the regalia of the Counter-Reformation and, more importantly, the attitude towards authority in the church that regalia represents? Of course not.

We have had four years in which the universal pastor of the church has unrelentingly called attention to the plight of the poor. Could a future pope turn his back on the Global South and the poverty of the people there in order to make nice with the wealthy of the West? Is it conceivable that a future pope would join forces with the movements of political reaction and national chauvinism, turning his back on the plight of migrants and refugees? How likely is it that the church of the future will be characterized by harsh criticisms of those who struggle with their marital situations, refusing them the balm of God's mercy and the possibility of a return to full communion with the church? Indeed, can we any longer think it appropriate to argue that there are categories of good Christians and bad, rather than starting from the reality that we all struggle with sin and doubt? Is the desire to erect "clear boundaries" between the church and the world still a viable project? Of course not.

In a sense, then, Pope Francis' reforms are already working; they have already set the church on a different trajectory. I am sure all of us know friends who have told us how they have been personally encouraged by Francis to view the church differently. "I know there's been some controversies of late," Cardinal Sean O'Malley told my colleague Josh McElwee in his look back at the last four years, "but the Holy Father's teaching and example are a great source of encouragement to our people. He has changed the conversation about the church in our country, and we are grateful for that." Cardinal O'Malley has long been one of the least clericalist clerics on the planet, so it is no surprise he embraces the new directions the pope is taking.

The reform of the Roman curia would certainly be going more quickly if Pope Francis were willing to sack those who oppose him, but it is clear that he really means it when he talks about the need for everyone to speak their mind, when he proposes a more collaborative way of informing decision-making, and when he warns other clergy against thinking they have all the answers. I would not exercise as much patience as he has exercised, but I always place my impatience near the top of the list of sins when I go to confession. I am glad Pope Francis is a more patient, collaborative, forgiving person.

It is also important to look at the reform of the curia through a non-ideological lens. Yes, there are people like Cardinal Raymond Burke whose opposition to the Holy Father is explicit and seemingly comprehensive. But there are also men whose situation is more complicated, like Cardinal Gerhard Müller, prefect of the Congregation for the Doctrine of the Faith. Müller has been very strong on confronting the scourge of clergy sex abuse; he has been all over the place when discussing Amoris Laetitia; and multiple sources tell me he lacks the organizational ability to run his dicastery. There are some jobs in the Roman curia you can fake, but prefect of the doctrinal congregation is not one of them. I hope Pope Francis will look for another candidate for that very important post, but it would be wrong to classify Müller as simply a member of the opposition.

The selection of cardinals and bishops has changed significantly under Pope Francis. For those who think nothing has really changed, I would point out that Blase Cupich is the cardinal archbishop of Chicago and Joe Tobin is the cardinal archbishop of Newark. Others, whom I need not name, do not have a red hat. What are the consequences of these appointments? While the U.S. bishops' conference has issued tepid and weak statements opposing President Donald Trump's executive orders on immigration and refugees, Cardinals Cupich and Tobin issued forceful statements which dominated the news coverage. If a Latino Catholic read only the statements from the bishops, they would wonder if the church was really willing to stand up for its own parishioners. But, when they encountered the powerful statements from Cupich, Tobin and others, they knew that if the Trump administration is going to go after them, then the administration will have to come through the Catholic Church's leadership.

Leadership. There is a balancing act that must characterize the reform of the church in our day. Obviously, clericalism must be rooted out as much as possible, which requires jettisoning all that nonsense about the "heroic priesthood" that flourished under Pope John Paul II, among other things. Seminaries warrant close attention from bishops, lest they become, better to say continue, as breeding grounds for clericalist opposition to the Holy Father. The provisions for removing bishops who are negligent in the care of their dioceses will have a positive effect, too. But you can't create a vacuum. The model of the priesthood Pope Francis is exhibiting, his wonderful daily homilies, his disavowal of any regal trappings, his informality and closeness to people, his attentiveness to the circumstances of people's lives, to the reality of people's lives, this is the model of priestly and episcopal leadership that, if followed, will truly remake the culture of the church. We can hope there will be additional opportunities for lay leadership, but the church is and always will be a hierarchic institution, and we need our bishops and clergy to follow the example of Francis, not because he is pope, but because he is so obviously following the example of the Master.

Finally, I wish to qualify the statement with which I began. To say that Pope Francis' reforms are "working" is not to suggest there is any kind of empirical test in the offing. This is not a matter of filling the pews or, more crassly, gaining spiritual market share. No, by "working" I mean that as the reforms are implemented, the church will become more and more faithful to the Gospel, more and more filled with the Holy Spirit. In the Global South, extreme poverty remains rampant, while in the modern West, dark and fascistic forces are gaining currency, and around the world the threat of environmental catastrophe continues its grim march. Only a church attentive to the Spirit's promptings and resolute in cleaving to the example and teaching of the Lord Jesus can confront the challenges of our time. The church has not always been equal to the challenges of the day, but if Francis' reforms continue to take root, this time, we might have a chance.