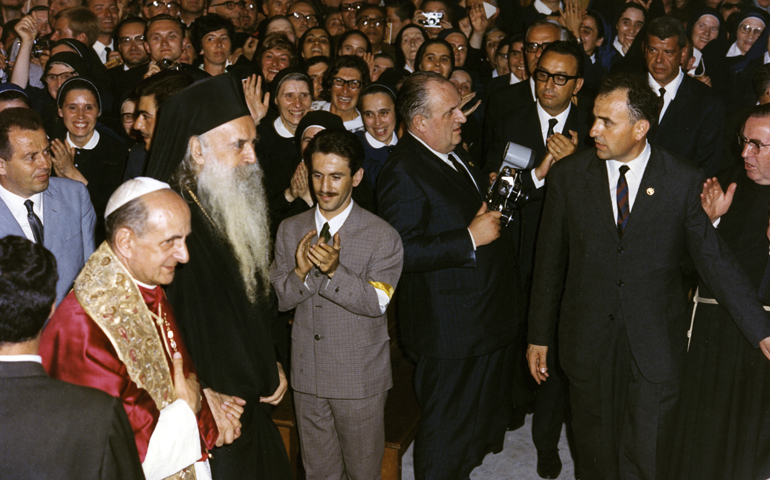 Editor's note: This is Part 2 of a three-part series discussing the theologies of the papacies of Pope Francis and Pope Paul VI. Read Part 1 here.

Pope Paul VI never got the credit he deserved for seeing the Second Vatican Council to a successful conclusion and for keeping virtually everyone on board in the tumultuous times that followed. Soon after the election of Pope Francis, it became clear that the new pope had an affinity for Paul. Why was he so great? And why were his accomplishments so easily ignored?

The second question is easier to answer. Giovanni Battista Montini was elected pope in 1963, taking the name Paul VI, after the death of Pope John XXIII who had convened Vatican II in 1962*. Paul would shepherd the Council until its close in 1965 and the church until his death in 1978. The Catholic right thought Paul was insufficiently rigorous in ferreting out those they thought were taking liberties with the implementation of the Council's reforms. The legalistic mentality, so evident in the opposition to Francis, faulted Montini for his ability to recognize the ambivalence of many of the issues facing the church. If you wanted clarity above all else, Montini's commitment to dialogue and acceptance of complexity were not your cup of tea. If you thought that the decentralization of decision-making was a fool's errand, Paul's commitment to synodality and to empowering episcopal conferences made you conclude he was foolish. The impatient often view patience as a fault.

The left gave up on Paul after the 1968 encyclical, Humanae Vitae ("On Human Life") and its continuation of the ban on artificial birth control: They never forgave him. This was wrong and wrong-headed. For starters, they passed over Paul's statement that "[r]esponsible parenthood, as we use the term here, has one further essential aspect of paramount importance. It concerns the objective moral order which was established by God, and of which a right conscience is the true interpreter." To be sure, conscience, then as now, must be linked to the teaching of the church and the objective moral order, but Paul never said conscience had no role to play. And, who can doubt that his fears that the neo-Malthusian agenda of the population control experts was a grave threat to human dignity? Consider this article by Melinda Henneberger about the search for the perfect sperm and egg at Harvard.

It is also true that the disproportionate emphasis on Humanae Vitae in evaluating the pontificate of Paul was somewhat unique to the U.S.

"The importance of conscience was lost, but I have to say not everywhere. The American Catholic context seems to me a particular case (in this issue, like in others)," Massimo Faggioli of Villanova University explained to me in an email when I asked about Paul VI's legacy. "In the U.S. Catholic church, an authoritarian interpretation of Humanae Vitae left a footprint that is much deeper here than anywhere else in the world. This means that in the U.S. the reception of Paul VI is much more driven by Humanae Vitae than by all the rest of Paul VI's teaching. For most Catholics in the world, Paul VI is also the pope of Populorum Progressio (social and economic justice), of Evangelii Nuntiandi (evangelization in a modern context), of Octogesima Adveniens (legitimate plurality of political options for Catholics)."

Faggioli's reply points to the first question with which I began, namely, why was Montini such a great pope? From his first encyclical to his final apostolic exhortation, Paul's teachings not only shaped much of what Pope John Paul II had to say, they are clearly an inspiration for Francis' magisterial teachings. The linkages between Evangelii Nuntiandi in 1975 and Evangelii Gaudium in 2013 are obvious, especially the centrality of concern for the poor to the integrity of Christian efforts to evangelize and the sense of a church in mission.

What is more, Paul had to try and reform the structures of the church to bring them in line with the Second Vatican Council's clear call for greater collegiality in decision-making. To be clear, he did not always succeed.

Think of the Synod of Bishops, which was the first institutional attempt to introduce collegial decision-making after the Council. The first one, held in 1967, tried to tackle five topics in four weeks. Only with the second synod, in 1969, did the synod fathers break into small discussion groups by language. The next synod, in 1971, tried to tackle two large topics, and the resulting text was a bit of a hash. In 1974, the synod fathers rejected the draft final statement prepared for them. [Historical footnote: the draft was the work of then-Cardinal Karol Wojtyla, who four years later would become Pope John Paul II.]

Some, even at the time, saw this as evidence that the synod had failed but Bishop Jean Guy Rakotondravahatra of Madagascar, who participated in the synod, saw it differently, saying, "We have had a chance, for the first time ever, to talk about our problems, our desires, our hopes and our eventual disagreements. We have seen that the majority of our colleagues agree with us. The Holy Father has listened to it all. What is the point of reducing the great wealth of our discussions to a few poverty-stricken propositions."

So, 10 years into the process, it was understandable that some thought it was stillborn. But, looking back, it is clear that what Paul was doing was experimenting, trying different ways to make the synods more successful. And, the stalemate at the 1974 synod led to his own greatest magisterial document, Evangelii Nuntiandi, issued the following year.

"One reason that they did not come to full fruition during Montini's time," says Faggioli, "is the amount of resistance against that change which is a change brought about by Vatican II: Already seven months after the conclusion of Vatican II, on July 24, 1966, Cardinal Alfredo Ottaviani (prefect of the Congregation for the Doctrine of the Faith) sends a confidential letter to the bishops conferences about the 'errors' in the interpretation of Vatican II."

Faggioli also points to a parallel development that affected how synodality would take shape: the empowerment of episcopal conferences.

"The first synods take place in a decade, the first decade after Vatican II, when the bishops' conferences have new, substantial power to make decisions for their own local churches (just think of the liturgical reform) and the hope is that the role of the Roman Curia and the Vatican will be different than in the past," explains Faggioli.

Here in the U.S., we had an experience of an episcopal conference starting during World War I and, before that, the plenary councils of Baltimore. But, in most countries, collegiality was entirely new and the focus on the local conferences garnered more attention and interest than the synods in Rome. In Latin America, the development of synodality through the meetings of the Latin American Episcopal Council*, known by its Spanish acronym CELAM, would prove the most fruitful incarnation of synodality anywhere in the post-conciliar church, and paying attention to this was an Argentine Jesuit, Jorge Bergoglio, who would join CELAM when he became an auxiliary bishop (1992) and then archbishop of Buenos Aires (1997).

Paul wanted the adult conversations begun at the Second Vatican Council to continue. Synods under John Paul II were sad, largely rote, affairs. Benedict XVI, pope from 2005 to 2013, would introduce an hour of open mike time at the end of each session of the synods, to promote genuine discussion and dialogue, but Francis' synods were the most open of any in living memory. Critics of Paul also need to recall that in the era when he became pope, he still thought he needed to use the royal "we" when speaking of himself, and he was still carried around on the sedia gestatoria. The atmosphere of "the court" had not been broken. There is only so much adult conversation you can have when people are bowing and scraping, and there is only so much change one institution can weather in a short amount of time.

But, his greatness lies in his first steps after the Council. On a range of issues, from collegiality to ecumenism to engagement with the world to supporting the development of new theological perspectives appropriate to the modern world to the reform of the liturgy, on each of these and more, Paul had to choose which path to begin in the wake of the Council. And, in each case, he set off in directions that would bear fruit in his own pontificate and beyond. He may have put a foot wrong here or there, but he did not choose any dead ends. His steps were measured, and the more excitable Catholics of both left and right found him impossibly moderate, but he not only kept the church together during tumultuous times, he began the implementation of Vatican II with intelligence and wisdom. I am not a fan of adding the words "the Great" to any pope until they have been dead for 500 years, but I will place my bet that when history's verdict is rendered, Montini will be seen as the greatest pontiff of the 20th century.

Tomorrow, I shall conclude this series by looking at the elements of continuity and discontinuity that have characterized the post-conciliar era, and how they help to explain both the direction Francis is taking and the opposition to him.