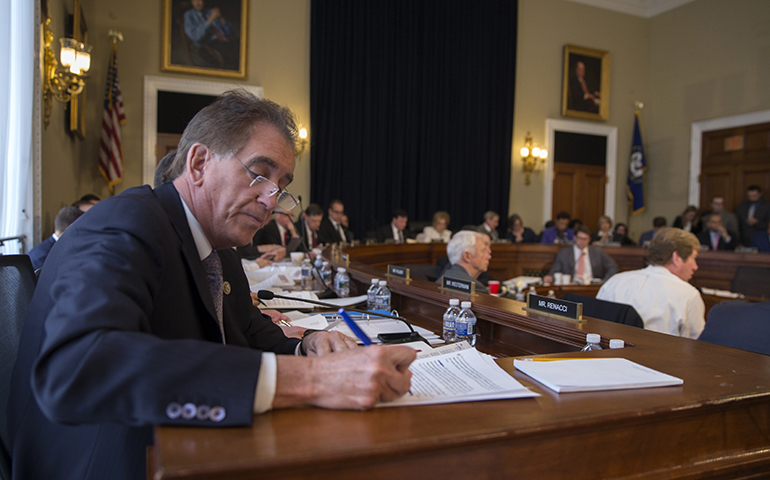 Tuesday I wrote about some of the reasons why the House GOP health care bill should not pass. Today is the big vote and so we pose different questions: Will it pass and what are the repercussions of its passage or its failure?

The president went to Capitol Hill on Tuesday to corral the votes needed to pass Speaker Paul Ryan's "repeal and replace" legislation. Actually, given the president’s warm embrace of the proposals, we should now call it the Ryan/Trump bill. He and his spokesman, Sean Spicer, have repeated interminably their campaign rhetoric: Obamacare is a mess, it is collapsing, it needs to be repealed and replaced. House GOP leaders are reading from the same script.

The president even made this extraordinarily callous suggestion to a meeting of the nation’s governors last month: "Let it be a disaster," he said then, "because we can blame that on the Dems that are in our room, and we can blame that on the Democrats and President Obama." Our strangely juvenile president seems to think the assignation of blame is more important than helping people have affordable access to health care. I am not naive, and I am sure other politicians have offered similar Machiavellian comments in private. Still, and this may be old-fashioned, but saying such things in public is different, it is no less repulsive, but it is very revealing. A sense of propriety is not a bad thing in a world leader.

The main opposition to the Ryan/Trump bill has come from the hard right, led by members of the Freedom Caucus. Even after they were cajoled by the man who wrote The Art of the Deal they were insisting they were not going to budge. They think the Ryan/Trump bill does not go far enough in disentangling government from the health care sector. Many of the members of the Freedom Caucus came to Washington on the Tea Party wave election of 2010. This has been their issue for seven years. They supported efforts to shut down the government in order to repeal the Affordable Care Act. They are ideologues, more concerned about Hayek's fancied "road to serfdom" than about whether or not people will actually get access to health care. They are not the kind of members whose vote can be procured with a promise to build a new bridge in their district.

These zelanti also come from those districts that are so reliably red, the only way they will lose their seats is to a yet more extreme conservative primary challenger. Draconian though the Ryan/Trump bill is, they label it "Obamacare Lite." They know that the president's approval rating is at a record low for a new president, somewhere in the high 30s, not the kind of number that would entice a member of Congress to walk out on a limb very far, especially when you know that limb is likely to be sawed off as soon as the bill crosses the Capitol rotunda and lands in the Senate. There, the pressure will be coming from moderate Republican senators like Sen. Susan Collins of Maine to pull the legislation in the other direction.

The reason the bill will die in the Senate is the same reason so many Catholic organizations are opposed to it: It harms the poor who rely on Medicaid and shifts costs from the rich to the poor. While writing this, NETWORK, the Catholic social justice organization led by Sr. Simone Campbell, sent me an email urging me to contact my congressional representative to vote no. The NETWORK website urges people to make fighting for health care part of their Lenten observance and I suppose calling a member of Congress is a kind of penance.

The U.S. bishops' conference also sent a second letter to members calling for the legislation to be changed in ways that make Medicaid more expansive, not less, as the Freedom Caucus demands. Writing for the conference, Bishop Frank Dewane, chairman of the Committee on Domestic Justice and Human Development, wrote:

"Millions of people who would be eligible for Medicaid under current law will be negatively impacted due to reduced funding from the per capita cap system proposed in the legislation, according to the CBO. Those struggling families who currently receive Medicaid coverage from the recent expansion will see dramatic changes through the AHCA as well, without clear indication of affordable, adequate coverage to replace their current options."

If the legislation fails, it is not clear the GOP has a Plan B. The promise to repeal and replace the Affordable Care Act has been one of the foremost agenda items for the Republicans for four elections now and failure to deliver on that promise will cost them with their base. But, the Republican base, cheered on by talk radio hosts and other conservative news outlets, needs to be tamed, not heeded. The responsibility that comes with power is real, not rhetorical, and members of Congress who blithely denounced the Affordable Care Act and passed countless repeal votes when President Obama was in office now have to wrestle with the vast complexities of the nation’s byzantine health care delivery system.

One thing is clear: Speaker Ryan's speakership will be crippled if he can't pass this bill. On the one hand, this is worrisome: For all my disagreements with Ryan's policies, we can all recognize in him a grown-up when compared to the president. On the other hand, this repeal measure shows that however many times Ryan has said he stopped taking his cues from Ayn Rand and was instead motivated by Thomas Aquinas, he still thinks it is more important to pursue tax cuts for the rich and an ethereal "freedom of choice" than to secure access to health care as the human right that it is. His libertarianism remains intact.

Like everything else about the first two months of the Trump administration, the whole repeal and replace effort has been chaotic, hurried, slipshod. The president is now helping to twist arms because he, too, will be crippled if this vote goes against him. Given his other agenda items, anything that cripples him is a good thing. The bill should be defeated on the merits, but it is certainly a nice side benefit if Trump loses a ton of political capital today.