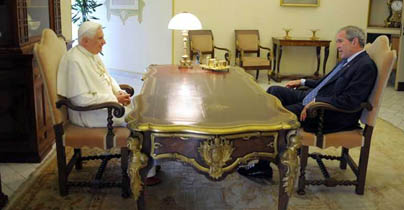 In this National Review article, Mssr. George Weigel deploys his superior knowledge of how the Holy See operates, after taking swipes at the rest of the journalistic world for our supposed lack of sophistication in really understanding the subtle ways the Vatican sends signals. Among his observations is this:

Pope Francis conducted his conversation with President Obama across a desk — a stage-setting exercise on the Vatican’s part that one canny media veteran thought “a tad aggressive” and another observer said resembled a school principal having a firm talk with a recalcitrant student. There was no attempt to embarrass here. But the arrangement nonetheless sent a signal, to the administration and to others: The Holy See was not interested in reinforcing the White House’s pre-meeting script, nor would it be interested in doing so for other public officials in the future.

If Weigel is correct, then how does he explain the photo above, that accompanied an article in the Daily Telegraph when President Bush met with Pope Benedict? I mean, that appears to be a desk between the two, doesn't it? Well, maybe it is actually a table and tables do not send the signal the desk between Francis and Obama sent. We should ask Mssr. Weigel to explain the difference.