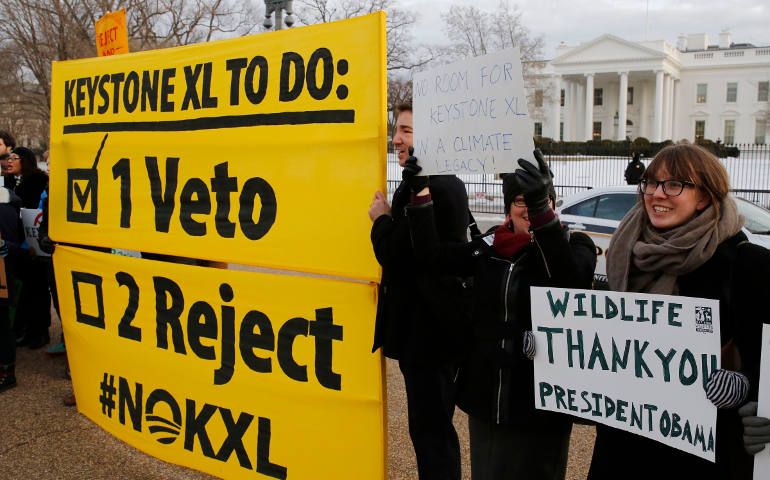 Veto supporters rally in front of the White House Feb. 24, the same day U.S. President Barack Obama vetoed a bill passed by the House and Senate to approving construction of the Keystone XL oil pipeline that would run from Canada to the Gulf Coast. (CNS photo/Larry Downing, Reuters)

Representatives of the groups told Catholic News Service they are hopeful that the Keystone XL project would not be approved by the White House after the Department of State concludes its years-long evaluation of the project that would carry oil from the tar sands region of Alberta, Canada, to Gulf Coast refineries.

"He's doing the right thing by vetoing it. The Keystone pipeline would be very damaging to the environment," said Patrick Carolan, executive director of the Franciscan Action Network, which has played a major role among faith-based organizations raising concerns about the project.

"As a person of faith, you have to really look at whether it's just making money for people. You have to look at the whole moral and ethical issue," Carolan said.

The veto will allow for "more time to reflect on and look at it and hopefully we'll decide we don't need this," he added.

However, supporters of the pipeline criticized the veto.

House Speaker John Boehner, R-Ohio, who is Catholic, labeled the president's action "a national embarrassment" and promised not to give up on the project.

Senate Majority Leader Mitch McConnell, R-Kentucky, promised to seek a vote to override the veto by March 3. It is unsure if he can convince enough Democrats to reverse their vote to achieve the two-thirds majority needed to override.

And TransCanada, the company building the pipeline, said in a statement that it remained "fully committed" to the project despite the veto.

Gerry Lee, executive director of the Maryknoll Office of Global Concerns in Washington, said the president took "the right stand."

"All along we've been opposed to the Keystone XL pipeline largely on concerns on the impact of the indigenous communities (in Canada) and impact on the environment. We just feel it was the right call by the president and we hope he would continue to stand firm on the issue," he told CNS.

"This (veto) is pointing in the direction of the realization that we can't continue to burn fossil fuels and still keep the planet within reasonable limits to avoid catastrophic climate change. The Obama administration seems to be getting that," Misleh said.

Sr. Patricia McDermott, president of the Sisters of Mercy of the Americas, said in a statement posted on the congregation's website that caring for the earth is a "moral and spiritual obligation" and that extracting tar sands oil would have wide impact on the environment.

"We must all grow in our awareness and our commitment to how the choices we make impact our earth and all creation, especially those persons who are poor," McDermott said. "In this case, we must seriously consider the health of indigenous peoples near the extraction sites in Alberta, Canada, and of low-income communities of color near refineries along the Gulf of Mexico who would be harmed by the building of this pipeline for the gain of others."

She also called upon Obama to "reject the pipeline whenever he has the opportunity."

The veto does not end the 1,100-mile pipeline project. Obama still has the final say on whether the project moves forward. He is awaiting the Department of State's findings on the impact of the northern segment of the pipeline from the Canadian border to Nebraska where it would connect to a section already in place.

Obama explained his veto in a brief statement, saying the bill "conflicts with established executive branch procedures and cuts short thorough consideration of issues that could bear on our national interest" including the country's security, safety and environment.

Pipeline supporters, including a congressional Republicans and Democrats, said the project would provide thousands of construction jobs and lessen the country's dependence on foreign oil.

Opponents said the pipeline would disrupt sensitive environmental regions and that a possible leak would contaminate underground aquifers used by farmers and residents. They also are concerned that the process of recovering the oil from Alberta's arboreal forests spews high amounts of greenhouse gases into the atmosphere, hastening climate change.

TransCanada has said the $7 billion project would generate an estimated 40,000 U.S. jobs, including 9,000 created over the two years of construction.