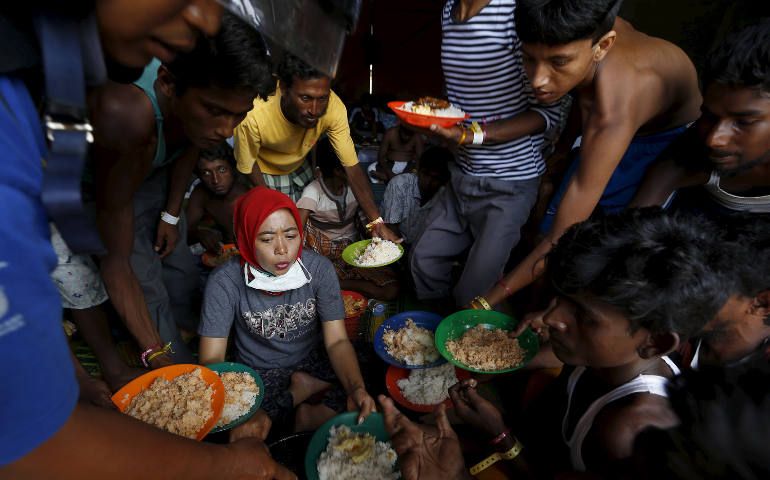 Bangladeshi migrants raise up their plates to ask for more food as breakfast is served by volunteers at a shelter in Kuala Langsa, in Indonesia's Aceh Province, May 19. Pope Francis said people must stop wasting, start sharing food and other resources. ( CNS photo/Beawiharta)
This article appears in the Francis: The Environment Encyclical feature series. View the full series.

People's tendency to run and hide from difficult issues is natural, which means sometimes "instead of acting, we prefer to delegate, at every level," the pope said Thursday in an address to participants in an annual conference on hunger organized by the Rome-based U.N. Food and Agriculture Organization.

In fact, avoiding hard truths is something "we often prefer even if we then won't miss a meeting, a conference or drafting a document" addressing the problem at hand, he said.

People must respond concretely to the urgent imperative that "access to necessary food is a right for all people. And rights do not allow for exceptions," he said.

Meeting the group at the Vatican, the pope gave an unusual lengthy speech touching on a number of issues he said were part of the fight against world hunger.

Topping the list, he said, was the need to turn declarations, plans and good intentions into concrete responses to the some 800 million people who are undernourished or starving, according to statistics provided by the United Nations' World Food Program.

A second concern is the amount of food being wasted -- estimated to be a third of total food production, he said.

Another problem, he said, is that it seems countries and people have become discouraged or even uninterested in the problem of hunger, now "an unpopular topic, an unsolvable problem" that doesn't get an adequate response or find consensus during the limited timeframes of presidential and congressional mandates.

What is required is a "politics of the other," which considers investing in helping others as important as helping one's own nation, he said.

Land rights are another issue, especially when transnational companies or governments export a poorer nations' produce abroad, leaving the local population "doubly impoverished because they possess neither food nor land."

In some parts of the world, women are not allowed to own land, so if they are single parents their families never have a stable or secure plot to cultivate or call their own, he said.

Also, "a good quantity of agricultural products are being used for other purposes, perhaps good aims, but not directly necessary for starving people," he said, referring to things like biofuels and cattle feed.

"Let us ask ourselves, then, what we can do. Rather, what am I doing?" he said.

The pope said not being wasteful was essential both in the agricultural and food industries and on a personal level.

People need to make a more concerted effort to "change lifestyles" and practice greater moderation, which "is not opposed to development, rather it is by now evident that it has become one of its conditions," he said.

People must start now in their personal lives, and be "aware that our small gestures can guarantee sustainability and the future of the human family."

As the world population grows and food needs increase, humanity can face that challenge by adjusting its "relationship with natural resources, land use, consumption, eliminating waste, and that way we will beat hunger," he said.

As nations share the world's finite resources and let go of "ulterior motives," the current wide extreme of food crises may be "harmonized," he said. It would mean that nutritional concerns for richer nations will no longer be "eliminating fats and promoting exercise" and for poorer nations "trying to get at least one meal a day."