After years of torture and imprisonment, Mohamed Nasheed was, at 41, democratically elected to the presidency of the Maldives. The critically acclaimed documentary "The Island President" (98 percent on Rotten Tomatoes) tells that story. More centrally, it tells President Nasheed's heroic story of putting a human face on this low-lying island nation, which faces inundation through climate change. The Maldives lie in the middle of the Indian Ocean and represent more than 1,200 coral islands, of which about 200 are inhabited. The Maldives' people have developed their culture over centuries. The challenge is that the elevation is at most a few feet above sea level. 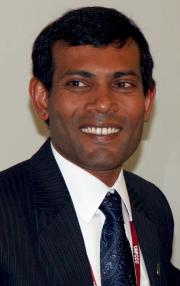 In 2008, Nasheed, leader of the Maldivian Democratic Party, was elected his nation's first democratically elected leader. "The Island President" follows President Nasheed's first year in office. In addition to the establishment of democratic institutions and the usual business of statecraft -- chairing staff meetings, making public appearances, addressing jobs and housing for the citizens of the Maldives -- one issue becomes central above all others: How will Maldives survive if in the not-too-distant future, rising sea levels will wipe away the vestiges that such a nation has ever existed?

In one scene, Nasheed visits a section of one of the islands that has washed out to sea. In another, he oversees the construction of levees. He films a public service announcement on behalf of the Maldives where he sits at a desk in a couple of feet of water. He even hosts a cabinet meeting under water to call attention to the Damocles sword that hangs over his nation's future. He and his island nation become the face and the conscience of climate change.

To preach by example as well as by words, President Nasheed committed the Maldives to climate neutrality in 10 years through an aggressive transition to renewable energy. (The Maldives are blessed in solar and wind resources.) He also helped form The Climate Vulnerable Forum, a coalition of nations in the developing world most vulnerable to the impacts of climate change.

The 2009 Copenhagen climate talks were on the verge of complete collapse. But through President Nasheed's last-minute cajoling and his eloquent address before the world leaders, the agreement was salvaged -- nations of the world came to a voluntary agreement to curb emissions. As weak and disappointing as the agreement was, the fact that there was any kind of agreement at all rests, as the film shows, on the dedicated shoulders of Nasheed. President Nasheed, a Sunni Muslim, shows a shrewd understanding of diplomacy and the media. The viewer is given unique access to this heroic figure -- dinner with his wife, negotiating with Indian officials, collapsing on a bed after a long day in Copenhagen. What comes through, despite the imprisonment and torture, despite the huge challenge of negotiating a future for an island nation that is in danger of disappearing under rising seas, is a portrait of a man of unparalled energy and optimism.

The film ends with the satisfying trip back to his beautiful island nation following the Copenhagen Climate Change Conference. However, the closing credits note that in February of this year, Nasheed was driven out of office by a police uprising and replaced by his sitting vice president, Mohammed Waheed Hassan.

"The Island President" was directed by Jon Shenk and is released through Actual Films. You can find more information about the film at its website.

Information about the issues concerning the Maldives can be found at the Maldives Democracy website. The Maldives might be the first country to face extinction as a culture. (I remember meeting a couple of mayors of Inuit villages along the Alaskan coast a few years ago who are also witnessing an erosion of their villages and way of life into the sea because of climate change. They were petitioning Congress to assist with their relocation.) I can't help thinking, when I see their faces and their struggle for survival, how important, really, are the issues that currently consume the church and our polity if standing in solidarity with our brothers and sisters is not part of the conversation or vision? The question the lawyer asks Jesus in Luke 10:29 remains a pivotal question for me: "And who is my neighbor?"