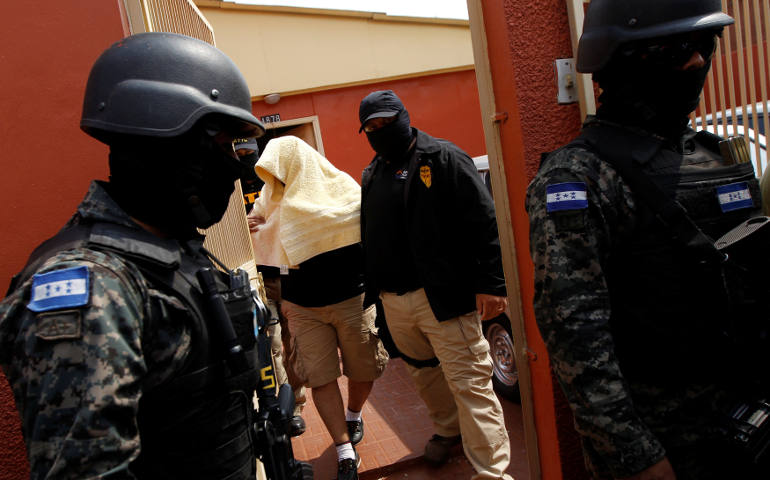 An alleged killer of environmental rights activist Berta Caceres Flores is surrounded by members of the military police after being detained in Tegucigalpa, Honduras. (CNS photo/Jorge Cabrera, Reuters)

Authorities arrested four men Monday in the murder of Honduran environmental activist Berta Caceres Flores. Yet, family members and Catholic organizations continue to call the international community to carry out its own investigation in one of the world's most murderous countries.

In early morning raids Monday, police captured the men, two of whom were linked to Desarrollos Energetico S.A., or DESA, a company with international funding proposing to build a dam on the Gualcarque River in western Honduras. As an indigenous rights leader, Caceres had been working to block construction of the dam in an area considered a sacred place for the Lenca people.

Following the arrests, Caceres' family and the group she founded, the Council of Indigenous and Popular Organizations of Honduras, said in a statement that it had been excluded from the investigation. It said the government should open the investigation to the Inter-American Commission on Human Rights.

"We have no way to judge whether the arrests are the result of an exhaustive investigation, nor whether they included the intellectual authorship at each level," the statement said. "However, news of the alleged participation of active and retired military officers linked to the company would seem to demonstrate the involvement of state agencies in the assassination."

In a statement, the company denied any link to the murder and said it was "surprised" by the arrest of one of the men, Sergio Rodriguez Orellano, "who serves as manager for social and environmental matters."

Authorities allege that Rodriguez paid a retired military captain, Douglas Geovanny Bustillo, who planned the murder and contacted local hitmen to carry it out. Caceres, who had reported receiving death threats from Bustillo and others for her opposition to the dam project, was killed in her bedroom late March 2. Gustavo Castro Soto, a friend and fellow environmental activist who was sleeping in the guest bedroom, was shot but survived.

Claretian Fr. Cesar Espinoza, a priest in Arizona, Honduras, said megaprojects, such as the dam proposed for the Gualcarque River, have fueled conflicts in rural communities.

"There has been a legalization of the processes allowing these projects to expand, and Berta became a victim of that legalization," he said.

Espinoza said pressure from the Caceres family and international community pushed the authorities into making the arrests.

"That does not mean, however, that the intellectual authors will be brought to justice," he said. "There is little confidence in the government will hold them accountable."

Questions over the government's capacity to solve the crime underscore the deep distrust of authorities in the Central American country, which has a checkered history in fighting human rights abuses and protecting activists, said Gerry Lee, director of the Maryknoll Office for Global Concerns, one of several organizations that called on the U.S. State Department to push for an independent, international investigation into the crime.

"I think it's clear that there are too many questions about the Honduran government's involvement in human rights abuses," he said in a telephone interview from Washington. "The fact is that it remains one of the most dangerous countries in the world for environmental activists. Human rights and indigenous leaders have continued to be assassinated since the coup."

On the same day authorities made the arrests, independent journalist and former Catholic radio news reporter Felix Molina, who had reported on the impact of the 2009 coup d'etat, was shot four times, but survived.

"I declare myself a survivor of the insecurity suffered by the majority of this country," he said the following day.

Violence has spiked in the country since the coup, in which President Manuel Zelaya was ousted. Last year, Honduras was the third-most murderous country in Latin America, with a homicide rate of 57 per 100,000, according to statistics collected by Insight Crime, which reports on violence in Latin America.