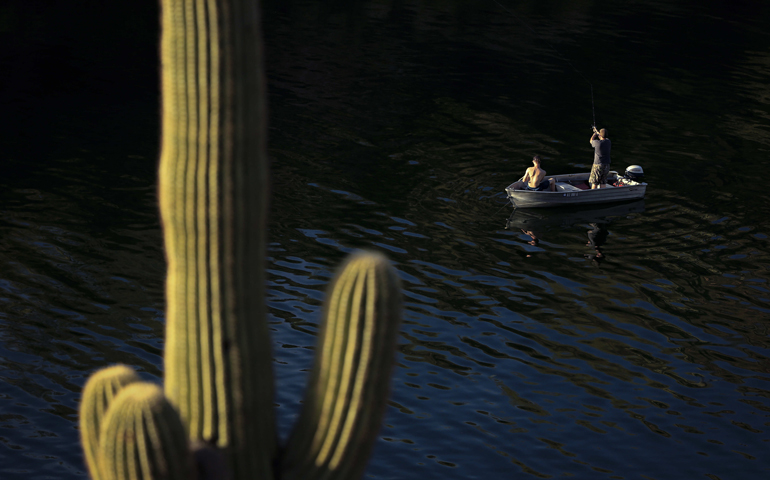 The possibility that a wall might be built separating the United States and Mexico is preposterous enough all on its own terms. It is a long, long border on our southern edge — 1,989 miles, to be precise. And some Mexicans already have a slogan: If they build it 20 feet, we will jump 40. On human terms, it is beyond ridicule, if not unprecedented as a Trojan sham.

What is even more perplexing, though, is what the built border wall would do to biodiversity. Foxes would no longer have holes, as Jesus might put it.

Ranchers on the border are making some of the most interesting arguments about "border control." They don't think the wall is ecologically wise. Animals will be cut off from their habitats. Over the years, they won't mix as well. The "ecotone" — the point where two different ecosystems meet and integrate — will be lost and a phony national environment will come into being. The birds will probably be okay but any animal, including the human that can't fly will be in trouble.

I remember when my daughter's roommate, who is a white Texan, fell in love with a Mexican student at their college. Her parents flipped out, and I do mean flipped out, at the idea of cross-racial breeding, even though such a possibility was way down the road and as it proved, never quite happened. The couple broke up, even though the parents' dismay made the Mexican wall's absurdity less comical.

We assume that the walls will prohibit this kind of mixing up of the genomes, as if mixing up was not the clear destination of creation and evolution.

Oddly, this whole debate about mixing and crossing shines a new light on Lynn White's famous 1967 essay, "The Historical Roots of Our Ecologic Crisis." White was rightly concerned that a theology of dominion, of man or woman or human dominating nature, was the source of our dangerous behavior toward out own nests.

Oddly, in dominion over our borders we are once again making the same mistake, putting some humans over others in an attempt to protect our humanity. Likewise, we are putting human interest, albeit the interest of the most powerful humans on the planet, above animal interest, forgetting what an Eden or ecotone really is.

An ecotone is like a permaculture, where humans are part of a much larger natural ecosystem. There we do not dominate, except at our own peril. There we live and let live. There we adapt and let adapt. Hybridity is a good thing, naturally and for the human. Homogeneity is actually naturally dangerous to our survival.

Ecotone may be a new word to you. It is like a hedgerow more than anything else. In an essay on ecotones and environmental ethics in the 1993 book In the Nature of Things, scholar Romand Coles wrote that "Ecotones are the edges where different ecosystems meet: where forest meets field, sea meets land, salt water meets fresh water." He noted the word's etymology: oikos, meaning "dwelling," and tonus, meaning "tension."

Coles pointed to natural ecologists who have highlighted the enormous "evolutionary potential" that lie in these places of blend and intermingling. Things mix it up in an ecotone. As is thought in the theory of permaculture, the hedgerow is a place of great excitement, with sassafras growing alongside a wild mushroom. A large part of me thinks of God as the one residing always in an ecotone, a place of tension and possibility. Creation was never only one thing but always many things, blending.

Why do I keep hearing God singing that Cole Porter song, "Don't Fence Me In"? Fencing in is also fencing out. Neither is good for the fox or the human.