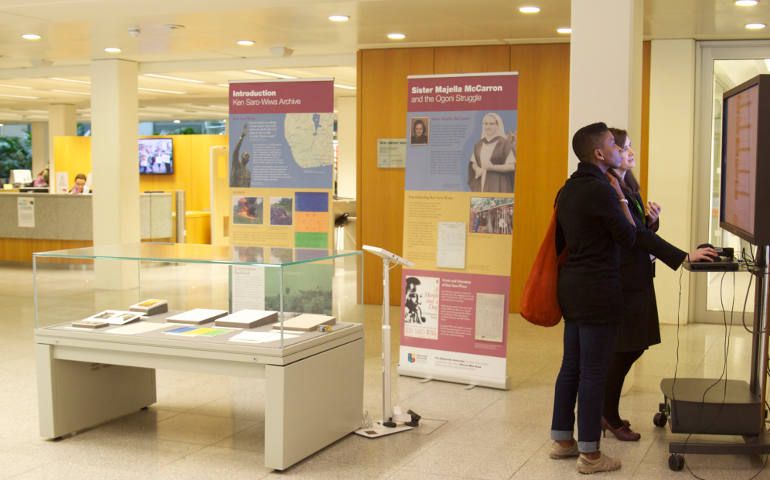 Noo Saro-Wiwa (front), daughter of Nigerian environmental activist Ken Saro-Wiwa, views the exhibition of her father's letters and poems to Our Lady of Apostles Sr. Majella McCarron and other memorabilia in the library of the National University of Ireland, Maynooth. (Alan Monahan)

Maynooth, Ireland — There is a little corner of Ireland that is forever Ogoniland. Since 2011, the library of the National University of Ireland in Maynooth is home to a unique archive of death-row letters from Nigerian environmental activist Ken Saro-Wiwa to Our Lady of Apostles Sr. Majella McCarron.

Every Nov. 10 for the past four years, the university has marked the anniversary of his execution in 1995 by displaying these letters, as well as the poems he sent to the Irish missionary nun before his death.

The unlikely friendship between the high-profile writer and television producer, who became a prominent campaigner for the Ogoni people, and the missionary from County Fermanagh, Ireland, began while she was living in the Nigerian city of Lagos.

McCarron arrived in southern Nigeria in 1964 to teach science in a secondary school run by her order. By the early 1990s, she was lecturing in religious education at the university. Strikes at the university in 1993 resulted in lengthy periods when lectures were cancelled, and as she had just been appointed as the Africa Europe Faith and Justice Network’s representative, she used her free time to acquaint herself with the Ogoni issue and meet Saro-Wiwa.

What was going on in Ogoniland was to the fore in the Nigerian media, and she gained Saro-Wiwa’s trust by drawing a parallel between the plight of the Ogoni and Ireland’s colonial history. A straight-talking but self-effacing woman of 77, McCarron plays down the significance of her contribution to the Ogoni struggle but she undoubtedly helped internationalize it.

“I didn’t know him for very long, from March 1993 until November 1995. But it was the peak of his campaign on behalf of his people and I had the good fortune to be able to accompany the campaign for three years -- part of it in Nigeria itself and part in Ireland,” she said.

“He was a prolific letter-writer and I would not have been the only recipient of letters, which were not personal,” McCarron said. Rather, Saro-Wiwa saw the Irish nun as a channel through which he could communicate the plight of the Ogoni to a wider audience. “That was his mode of campaigning when he was in detention.”

The last letter she received from him arrived one month before he was executed. Those that had found their way to her had been secreted in breadbaskets and smuggled out from the military detention center where Saro-Wiwa was guarded by soldiers, “which shows how seriously they took him,” she said. “He was only brought to a prison on the morning of his execution.”

Saro-Wiwa’s campaigning threatened the lucrative oil profits Shell had been accruing through its wells and refineries in the Niger Delta. Through the Movement for the Survival of the Ogoni People (MOSOP), Saro-Wiwa sought to protect the Ogoni’s oil-rich ancestral lands against further environmental destruction.

Despite a huge international protest, including the intervention of U.S. President Bill Clinton, the Nigerian regime of Gen. Sani Abacha brutally silenced Saro-Wiwa, along with eight other Ogoni campaigners.

In 2011, a United Nations Environment Program report criticized Shell and the Nigerian government for the pollution of Ogoniland. That year, McCarron decided it was time to do something about the Saro-Wiwa letters, which she had kept among her personal belongings for 16 years.

Recognizing their potential value to researchers and human rights activists, she approached the university in Maynooth, which has strong associations with missionary activity and a range of courses dealing with social justice issues, as a suitable home for it.

She also donated a collection of photographs, video recordings, flyers, articles and artifacts, including a cap that had belonged to Saro-Wiwa and a MOSOP flag. The launch of the archive also produced a book, Silence Would Be Treason, the title taken from a line in one of Saro-Wiwa’s poems.

Last November, to mark the 20th anniversary of Ken Saro-Wiwa’s death, McCarron was joined in Maynooth by Noo Saro-Wiwa, the daughter of the activist and a writer in her own right. Her travelogue, Looking for Transwonderland, documents her return after 10 years to the country she vowed never to see again after her father’s execution when she was just 19.

A bursary was launched by Maynooth University to fund a postgraduate student to do research work in keeping with Ken Saro-Wiwa’s work and ideals. The first Ken Saro-Wiwa scholar, Graham Kay, is undertaking research into the influence that oil companies exercise on governments.

Speaking to NCR, Noo Saro-Wiwa paid tribute to Maynooth University’s curatorship of the letters and poems as the “first major archive” of her father’s writings.

She believes her father’s message is as relevant today as it was two decades ago.

“Things have moved on but not as much as we would like,” she said. “Governments continue to favor big companies and give them free rein, ignoring the little man in the middle. I think it is terrible that people in government and the multinationals have that much leverage and power. It is like they are gods shaping our destiny and there are rare benefits for the people most affected. That is what is so galling.”

“My father’s message is really important -- without the environment we will not survive as a species. We have to take care of it. Technology and industry are good but that doesn’t mean you have to disrespect the environment.”

In her address, McCarron read a passage from Noo’s book that provided insight into the integrity of Ken Saro-Wiwa:

My father never bought into the Nigerian system of corruption. I was blind to the virtue behind our modest home and few holidays, and I resented his frugality and non-materialism. I craved a luxurious lifestyle. But he held an intense disdain for such things.

Describing it as “a beautiful passage,” the nun to whom Saro-Wiwa dedicated one of his poems “For Sister Majella McCarron” paid tribute to his “political bravery.”

“The resolution of oil and gas pollution is so simple: Turn off the tap -- stop the flow -- mend the leak -- clean the stain -- allow the Earth to flourish and feed,” she said.