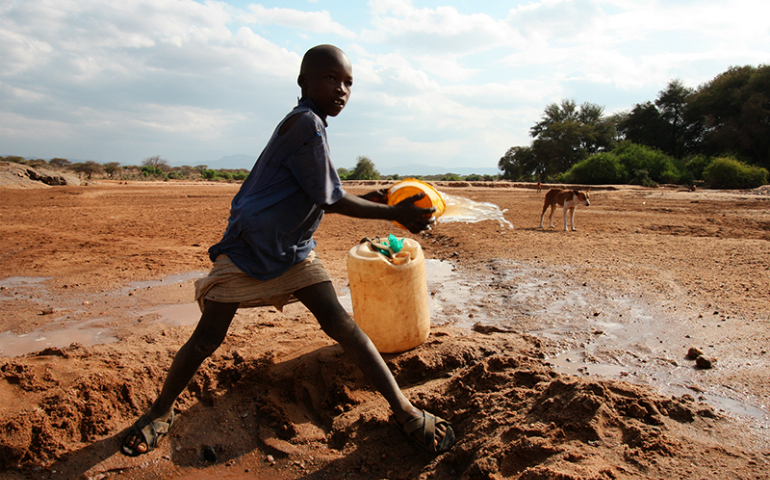 A child gathers water from a riverbed near Isiolo, Kenya, on July 30, 2013. (EU/ECHO/Martin Karimi)

When her pantry runs dry, Agnes Mwikali walks down a dusty road to the local Roman Catholic Church mission.

There, beyond the metal gate and the church garden where the crops are withering, she steps into the administration building and asks for a 4-pound bag of cornmeal.

In Thatha, her home, about 93 miles northeast of Nairobi, a severe drought has left many families without food, water and pasture for their livestock.

Mwikali, a 40-year-old mother, has watched in consternation, as extreme temperatures have destroyed crops, drained water sources and laid grazing fields to waste.

"We are trying everything," she said. "There are many of us. Many families don’t have enough food."

Mwikali has 14 mouths to feed; her children range in age from 23 years old to 3 months. She has supported herself by weeding, herding or fetching water. But that kind of work has become scarce with the advent of the drought.

"The rains are our greatest disappointment," she said. "Every season, we plant our seeds and watch the crops germinate, only for the rains to leave before they mature."

"You can’t tell them that there is nothing," Matolo said. "As their shepherd, I have to find a way to ensure they get something to eat. Sometimes I share my own food."

Matolo estimates that nearly 3,000 people in his parish urgently need food aid. About 30,000 are at risk.

A bag of cornmeal or a bottle of oil would make a difference for a family, but the priest said there is too little to give.

The last time this region received meaningful rainfall was seven years ago. So Matolo has been storing the little food he gets as part of the agricultural tithe that small farmers and others have traditionally given the mission.

East Africa is in the grips of yet another severe drought, largely attributed to climate change. The United Nations’ Intergovernmental Panel on Climate Change predicts the continent will be hardest hit by climate change, in part because 1 in 4 people in the region lives in extreme poverty.

The recurrent droughts have taken a heavy toll on religious leaders, as they move to aid communities threatened by starvation. The current drought has hit Kenya, Tanzania, Somalia, South Sudan and Ethiopia, disrupting livelihoods for millions of people.

According to religious leaders, the battles against the drought have been fierce and draining and governments are not doing enough.

Agriculture in Africa is underfunded, although several governments in the African Union Maputo Declaration on Agriculture and Food Security committed to spending 10 percent of their national budget on agricultural development. Only 13 countries have met that target.

In Kenya the drought stretches across the coastal, north, northeastern and southern lowlands. Even the western region, which has not traditionally experienced severe droughts, is affected. Experts warn that the situation may persist for the next six months.

"The drought is of great concern to us as Muslims," said Sheikh Hassan Ole Naado, the deputy secretary-general of the Supreme Council of Kenya Muslims. "We are praying and we are mobilizing."

Kenya’s government has been delivering relief food to nearly 1.6 million in arid and semi-arid areas. Officials say the number will surpass 2 million by the end of February.

Last week, President Uhuru Kenyatta ordered the resumption of school feeding programs so that children can stay in school. The schools are also required to accept food as school fees.

In the north and northeastern regions, the Kenya Red Cross has been buying livestock from farmers, slaughtering the animals and distributing the meat to the community.

Meanwhile, Matolo and other many faith leaders in East Africa continue to stress better farming methods, the use of quality seeds and increased water harvesting.

"When I see the people starving, I feel desperate. I also feel disappointed that many of the promises by government officials to deliver water have not been honored," said Matolo.

"If these people can get water for irrigation, the area will become the country’s bread basket. They are doing it in Israel, which is a desert. Here, the soils are very fertile and the people are not lazy."