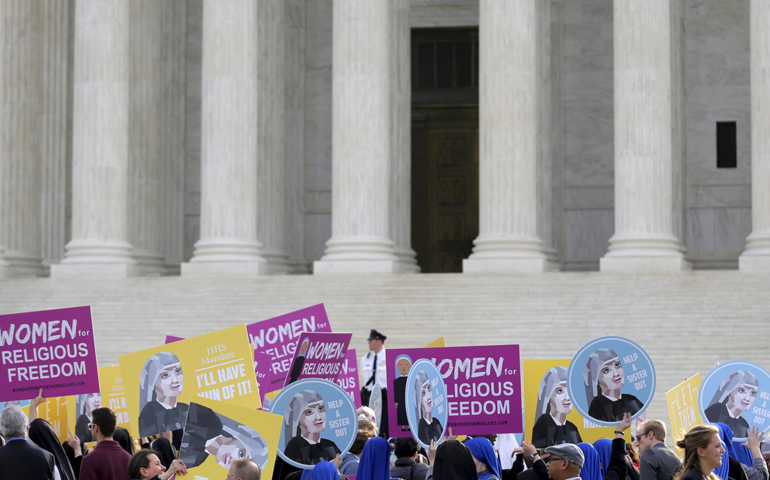 Women religious and others demonstrate against the Affordable Care Act's contraceptive mandate March 23 near the steps of the U.S. Supreme Court in Washington. (CNS/Joshua Roberts, Reuters)

According to most of the media, the U.S. Supreme Court has found a solution to the ongoing fight between the U.S. bishops and the Obama administration over the contraceptive mandate established by the Department of Health and Human Services in implementing the Affordable Care Act.

In reality, the parties are still far apart.

The contraceptive mandate requires that employers provide free contraceptive medication and services as part of their employees' health insurance. In the regulations implementing the mandate, churches are exempt but special rules apply to other religious organizations such as hospitals, universities, and social welfare agencies.

The bishops objected to Form 700, which they said involves the religious organization in material cooperation with evil. They referred to it as a permission slip allowing the insurance company to provide contraceptives to their employees. They argued that forcing religious organizations to fill out this form and send it to their insurers is a violation of the Religious Freedom Restoration Act of 1993 (RFRA).

In response to court action granting temporary and partial relief to the Little Sisters of the Poor and Wheaton College, the government said that in place of Form 700, a religious organization could simply send a letter to HHS saying it does not want contraception coverage in its insurance plan. This letter would also provide contact information for the organization's insurance company so that the government could inform the insurance company of its obligation to provide free contraceptive services to the organization's employees. The petitioners found this objectionable also.

After the case was heard by the U.S. Supreme Court (Zubik v. Burwell), the court took the unusual step on March 29 of proposing a solution: eliminating the notification and having the contraceptives provided without any such notice. The organization in the process of purchasing insurance would simply inform the insurance company that it did not want contraception services included in its plan.

If this proposal truly resolves the issue, the lawyers on both sides should be embarrassed that they had to go all the way to the Supreme Court to find such a simple and obvious solution. Hundreds of thousand dollars of legal and PR fees have been consumed by this case. For this we had a Fortnight of Freedom? What a waste!

The government’s April 12 supplemental brief in response to the court’s proposal explains HHS’s attempt "to develop an accommodation that would 'effectively exempt' objecting religious organizations from any obligation to cover contraceptive services, while still ensuring that women employed by those organizations receive the full health coverage to which they are entitled by law."

It recounts how the government "engaged in three rounds of notice-and-comment rulemaking to develop and refine regulations achieving those two goals." It argues that the regulation "reflects the Departments' expertise in the complex system of federal and state laws governing the myriad health coverage arrangements in the marketplace."

Speaking for the administration in the brief, Solicitor General Donald B. Verrilli Jr. defends the "self-certification process," which "was adopted with broad support from commenters because it provides clarity and certainty for all parties whose rights and duties are affected by the accommodation, including the objecting employers."

Such a process would certainly ease the work of government and insurance workers responsible for the programs. Without the form or a letter, HHS will not even know which insurance plans are supposed to implement the accommodation. It would have to issue a new regulation requiring insurance companies to cover contraceptive services if they are informed by a religious organization of its objection to coverage.

In essence, the government would have to start over, and go through notice-and-comment rulemaking process, to have the new regulation. It does not want to do that, which is why it wants the court to uphold its proposed regulations including self-certification through Form 700 or a letter.

Other lawyers, like Professor Douglas Laycock of the University of Virginia Law School, disagree. "With respect to the self-insured plans, the government is preventing any solution by taking too narrow a view of its regulatory authority," he says. "But if we solved that problem, the religious organizations would absolutely veto that solution."

Despite its reservations, the government said that if the court determines that the existing accommodation must be modified, then "it should make clear that the government may continue to require the relevant insurers to provide separate contraceptive coverage to petitioners’ employees in accordance with the other provisions of the current regulations."

In other words, the government wants to make sure that, if self-certification through Form 700 or a letter is dropped, the court makes clear that everything else in the regulations are OK. The government fears that if the court only settles the issue of self-certification, then it would leave open the possibility of legal disputes over other parts of the regulations, which "would lead to years of additional litigation, during which tens of thousands of women would likely continue to be denied the coverage to which they are legally entitled."

The administration clearly believes that eliminating self-certification will not satisfy the plaintiffs. "In nearly five years of administrative proceedings and litigation, petitioners have never suggested that an arrangement like the one posited in the Court’s order would allay their religious objections," says the government brief. "To the contrary, they have consistently articulated objections that would apply equally to such an arrangement."

The petitioners’ supplemental brief suggests that the religious organization’s insurance company could send out a separate card for contraceptive coverage to all the organization’s employees with a telephone number to activate it, like is done with credit cards. They see this as similar to separate plans for dental or visual care that supplement what is covered in the principal health plan.

Granted the medical profession’s objections to additional paper work, patients would have to make sure that their doctor or network is willing to accept the separate plan that only deals with contraceptive services. Doing the paperwork for the one or two patients who need it will drive doctors nuts, and they may simply refuse to accept it, which would mean that the woman would have to go to another doctor for contraceptive services or pay for them herself.

"In a sharp departure, petitioners now acknowledge that they cannot invoke RFRA to prevent the government from requiring that the insurers with which they contract also provide separate contraceptive coverage to their employees," asserts the April 20 supplemental reply brief from the government.

"But petitioners assert that it is not enough that insurers provide that coverage entirely outside petitioners' health plans and without their involvement, as the accommodation already requires. Petitioners also insist that the coverage must consist of contraceptive-only insurance policies, not direct payments for contraceptives. And they add that women must take affirmative steps to enroll, and cannot be covered automatically."

"RFRA does not give petitioners the right to insist upon those new conditions," says the government’s supplemental reply brief. "The statute simply does not entitle them to dictate the terms of insurers' separate dealings with women."

It notes that the government considered contraceptive-only policies but adopted a different approach after insurers and one of the petitioners explained that state insurance laws would make such a policy unworkable.

"Insurers protested that such policies do not exist in the market and 'would not be permitted under state contracting or insurance law' for a host of reasons," explains the supplemental brief. For example, some states do not permit single-benefit policies except for dental and visual.

"Petitioners are well aware that reliance on such policies would not work," complains the government.

The supplemental brief also objects to requiring women to take affirmative steps to enroll instead of being enrolled automatically.

"Petitioners trivialize the impact of enrollment requirements," says the government, but evidence shows that "'participation dramatically declines when people have to take even small administrative steps to participate' in beneficial programs."

For example, one study found that "patients who had to opt in to a free vaccination program were 36% less likely to receive the vaccine" than those "automatically enrolled."

In short, the government continues to argue that "the Court should not mandate the elimination of the existing notice requirement [Form 700 or a letter] because it is a minimally intrusive process that plays an important role in effectuating the accommodation."

The government believes that the petitioners "still have not asserted any religious objection to stating in writing their opposition to contraceptives and eligibility to opt out."

"It would be startling to hold that RFRA entitles a religious objector not only to an exemption, but also to insist on being exempted without notifying anyone," concludes the government. "Religious exemptions routinely require objectors to opt out by specified means, including by certifying their eligibility."

Meanwhile, the petitioners’ April 20 supplemental reply brief retorted that "The government’s complaints are not only legally irrelevant; they are also unpersuasive. ... The government’s continued inability to recognize that it cannot cure one substantial burden on religious exercise by imposing another is inexplicable."

The April 12 and 20 supplemental briefs show how far apart the two parties continue to be.

Professor Douglas Laycock, an expert on religious freedom who is normally sympathetic to religious groups whose freedom is under attack, says that "The religious organizations attached poison pill conditions to their acceptance of the Court’s proposal. They say that there has to be a separate insurance policy.”

Like the government brief, Laycock points out that "The government initially proposed a separate insurance policy, when it put draft regulations up for public comment, and all the insurers and one of the religious organizations in this case said that wouldn’t work."

"The religious employers also insist that women have to enroll themselves in this separate policy and not become eligible for benefits automatically," Laycock continues. "The government rejects that, because it is one more obstacle that will reduce the number of women getting free contraception; it wants automatic eligibility."

"So the religious organizations did not really say yes," concludes Laycock.

Despite its attempt to find a solution to this conflict, the ball is back in the Supreme Court. If five justices cannot agree on a solution, the law will be applied differently in different parts of the country depending on how appeals courts have ruled.