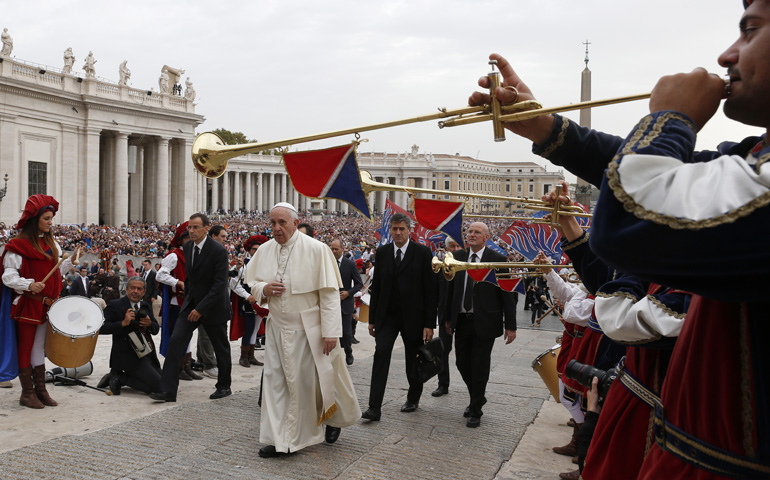 Pope Francis walks past an Italian musical group in traditional attire as he arrives to lead his general audience Wednesday in St. Peter's Square at the Vatican. (CNS/Paul Haring)

The church of Christ is called to keep the light of hope alive in the world, showing all humanity the path leading to "the merciful face of God" and salvation in Christ, Pope Francis said.

Focusing his general audience talk Wednesday on the ultimate destiny of the church and all its members, Pope Francis asked the estimated 30,000 people in St. Peter's Square to repeat with him three times: "We will be with God forever."

"Look," the pope told them, "Christian hope is not simply a desire or wish, it is not optimism. No! For a Christian, hope is expectation, a fervent, passionate expectation of the ultimate and definitive fulfillment of a mystery: the mystery of the love of God in which we were reborn and are already living."

In this world, the Christian life is a time of preparation for the ultimate meeting with the Lord, he said.

"The church is the people of God who follow the Lord and prepare day-by-day for the encounter with him, like a bride preparing for her groom. It's not just an expression; there will be a real wedding," Pope Francis said. Jesus became human, died and rose again to fulfill "the plan of communion and love woven by God in the course of history."

At the same time, he said, Christians must ask themselves "with great sincerity: Are we really bright and credible witnesses of this expectation, this hope? Are our communities marked by the presence of the Lord and eager expectation of his coming? Or do they seem tired, numb, weighed down by effort and resignation?"

Pope Francis urged Catholics to pray to Mary, "mother of hope and queen of heaven," to help the church "always remain in an attitude of listening and expectation" and "permeated by the love of Christ."

Referring to Revelation 21, Pope Francis said the Bible also tells Christians that there will be "a new heaven and a new earth," and that the church "will make visible the 'new Jerusalem.' This means that the church, in addition to being the bride, is called to become a city -- the symbol par excellence of coexistence and human relationships."

The biblical vision, he said, is that the new city will be one where "everyone and all peoples are gathered together" in God's tent. "And in this glorious structure there will no longer be isolation, abuse of power or discrimination of any kind -- social, ethnic or religious -- but we will all be one in Christ."