God created all people, desires to save them, pope says on Epiphany 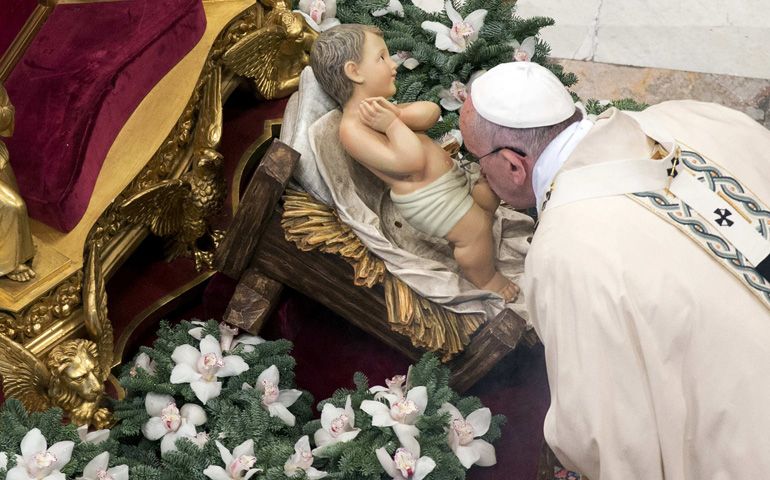 Pope Francis kisses a statue of baby Jesus during Mass Tuesday on the feast of the Epiphany in St. Peter's Basilica at the Vatican. (CNS/Reuters/Andrew Medichini, pool)

Vatican City — In every age and in every culture, people seek God just as the Three Kings did and, in every age, with the help of the Holy Spirit, they find him in the surprising humility of a baby born in a manger, Pope Francis said.

"Led by the Spirit, they come to realize that God's criteria are quite different from those of men, that God does not manifest himself in the power of this world, but speaks to us in the humbleness of his love," the pope said Tuesday, the feast of the Epiphany.

Before beginning the Mass in St. Peter's Basilica, Pope Francis and two families -- each with two small children -- paid homage to the newborn Lord by kissing a statue of baby Jesus that had been placed in front of the main altar on Christmas Eve.

The journey of the Magi from the East and their discovery of the babe, the pope said in his homily, is a sign that Jesus came to save all peoples, not just his fellow Jews.

"According to tradition, the wise men were sages, watchers of the constellations, observers of the heavens in a cultural and religious context which saw the stars as having significance and power over human affairs," the pope told the congregation. "The wise men represent men and woman who seek God in the world's religions and philosophies: an unending quest."

The Holy Spirit prompted them to follow the star, kept them strong when their quest proved difficult and filled them with the grace they needed "to have a personal encounter with the true God," he said.

While it would have been understandable to not believe that the baby was the Messiah, the Holy Spirit helped them "enter into the mystery," the pope said. "The wise men are thus model of conversion to the true faith, since they believed more in the goodness of God than in the apparent splendor of power."

The feast of the Epiphany, he said, is a time for all Christians to ask themselves where God can be found in their lives and whether they resist the temptation to put their faith in people or things that demonstrate worldly power.

"The crib points us to a different path from the one cherished by the thinking of this world," Pope Francis said. "It is the path of God's self-abasement, his glory concealed in the manger of Bethlehem, on the cross upon Calvary, in each of our suffering brothers and sisters."

While Pope Francis and thousands of people were at Mass in St. Peter's Basilica, thousands more lined the main boulevard leading to St. Peter's Square for the traditional, folkloric Epiphany celebration. Marching bands, baton twirlers and more than 1,500 people in Renaissance costumes paraded up the street ahead of the Three Kings on horseback.

Vatican police said there were 50,000 people were in the square to recite the Angelus at midday with the pope.

The revelation of Jesus to the Three Kings, the pope said at the Angelus, was the "manifestation of God's love and universal salvation. He does not reserve his love to a privileged few, but offers it to all."

Just as all human beings have one creator, the pope said, God willed that they would have one savior, Jesus Christ.

"For this reason, we are called always to nourish great trust and hope for every person and his or her salvation," he said. "Even those who seem far from the Lord are followed -- or better, pursued -- by his passionate and faithful love."

Like the Wise Men, he said, Christians must continue to journey closer and closer to the Lord, attentive to the signs of God's presence, untiring and courageous.

"Attentive, untiring and courageous -- but one thing is missing," he said. "Walk in the light! And what is the light? The Gospel of Jesus. Always have a Gospel in your purse or pocket to read."

God created all people, desires to save them, pope says on Epiphany

Seek Jesus, adore him, serve him and others, pope says on Epiphany