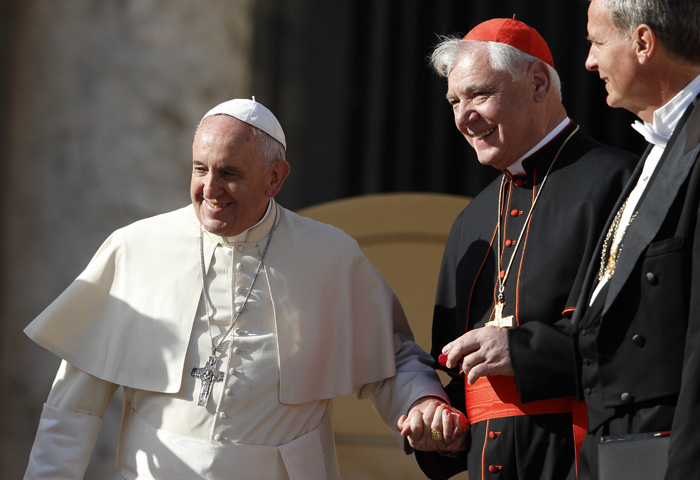 Pope Francis and Cardinal Gerhard Müller, prefect of the Congregation for the Doctrine of the Faith, during his general audience Wednesday in St. Peter's Square at the Vatican (CNS/Paul Haring)

All Christians are called to holiness and to take even little steps each day to be more loving and more Christ-like, Pope Francis said.

"Some think that holiness is closing your eyes and making the face of a plastic statue, but that's not holiness," the pope said Wednesday at his weekly general audience.

Holiness is something much greater, much more profound than looking like an image on a holy card, he said. "It is living with love and offering your own Christian witness in your daily tasks."

Pope Francis said "a great gift" of the Second Vatican Council was the recovery of the notion of "the church as communion," a community formed by people who "have equal dignity and have the same vocation to holiness" by virtue of their baptism.

"To be saints, one does not necessarily have to be a bishop, priest or religious, no," he said. "We are all called to become saints."

"Many times we are tempted to think that holiness is reserved only for those who have the possibility of detaching themselves from ordinary concerns so they can dedicate themselves exclusively to prayer," he said. "But that's not true."

Holiness, the pope said, is a gift God offers to everyone and a response to his grace. It is the result of hundreds of little steps and gestures each day. And they will be different for each person depending on the circumstances of one's life.

Consecrated men and women become saints by living their vows with joy, he said. Married people become saints by loving and taking care of their husband or wife. Single Catholics become saints "doing their work with honesty and competence, and offering their time to serve their brothers and sisters."

In a factory or an office, in the marketplace or in the home, he said, God communicates with the faithful and gives them the grace to be holy.

Parents and grandparents are taking a step toward holiness when they patiently listen to their children or grandchildren and when they enthusiastically teach them "to know and follow Jesus," the pope said. "Holiness comes through the exercise of patience" with children, especially when you are tired, he added.

People who do volunteer work take a step toward holiness every time they demonstrate God's love for and closeness to someone who is suffering, he said.

"On Sundays, going to Mass and receiving communion -- sometimes adding a good confession that cleans us up a bit -- that is a step toward holiness," the pope said.

"Be bearers of holiness. Always, eh: in your home, on the streets, at work and in church," he told the estimated 13,000 people at the audience. "Don't be discouraged in following this path. God himself will give you grace."

Pope Francis asked those at the audience to do a brief examination of conscience, asking themselves how well they respond to their vocation to holiness.

"When the Lord invites us to be holy," the pope said, "he is not calling us to something heavy or sad, but the complete opposite: It's an invitation to live and share his joy in every moment of our lives."