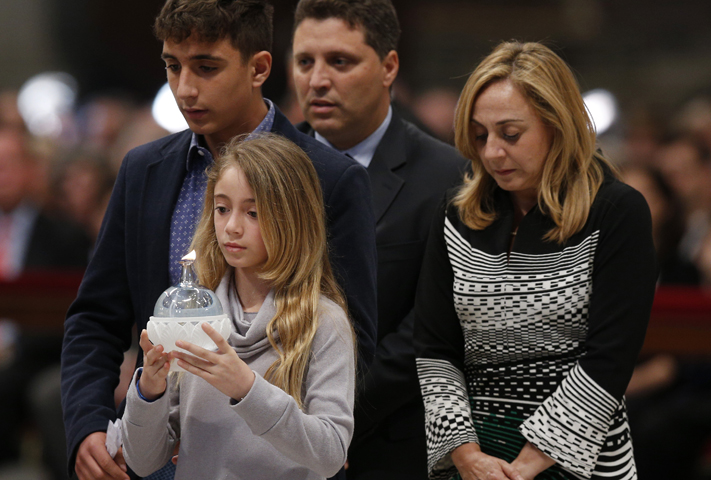 Members of the Pellegrino family walk forward to present a candle during a prayer vigil led by Pope Francis "to dry the tears" of the suffering in St. Peter's Basilica at the Vatican May 5. (CNS/Paul Haring)

The tears shed by men, women and children around the world each day cry out for mercy, compassion and consolation, Pope Francis said during a special Year of Mercy prayer service for those who weep.

"How many tears are shed every second in our world; each is different but together they form, as it were, an ocean of desolation that cries out for mercy, compassion and consolation," the pope said May 5 as he led the prayer service in St. Peter's Basilica.

Before the pope spoke, he and the congregation listened to three testimonies. Giovanna Astarita and Domenico Pellegrino and their son Raffaele spoke about the suicide of Antonio, the couple's first son. He was only 15. "Antonio dragged my life, my soul and my mind into that tomb, too," his mother said. Faith in God and an experience of God drying her tears was and is the only thing "that prevents me from going crazy," she said.

Maurizio Fratamico spoke about how he worked, traveled, made a lot of money, "used and threw away" a lot of young women, but felt empty and alone. His twin brother had a conversion experience and shared it. Thanks to the tears of his parents and his own tears of remorse, Fratamico said he has set out on a journey of faith and has found "the joy I was always seeking."

Qaiser Felix, a Catholic journalist from Pakistan, spoke about how his reporting on anti-Christian discrimination led to threats against him and against his family, eventually forcing him to flee and to try to start life over in Italy. "To know persecution and the fear of death is a terrible experience, especially when I think of my children," he said.

The service included special prayers for persecuted Christians; those in imminent danger of death; people enslaved; victims of war and terrorism; abused children; the seriously ill and their caregivers; the unjustly accused and prisoners; those who feel abandoned, depressed and desperate; people suffering from addictions; families who have experienced a miscarriage or the death of a child; and those who have lost or been forced to leave their homes, families or jobs.

But before the formal prayers were read, ushers went through the basilica with baskets, collecting the prayer requests of the congregation.

At the beginning of his homily, Francis asked people to join him in asking for the Holy Spirit's presence. "May he enlighten our minds to find the right words capable of bringing comfort. May he open our hearts to the certainty that God is always present and never abandons us in times of trouble."

Everyone has experienced the sadness or suffering that makes them yearn for a comforting presence and a word of consolation, he said. "The bitterest tears are those caused by human evil," especially when a loved one is violently killed.

When one is in pain or mourning, he said, God offers consolation and "in his tenderness comes to wipe the tears from our eyes."

For centuries, the pope said, Christians have drawn consolation from knowing they are not alone in their pain and that Jesus, too, knew what it meant to weep for the loss of a loved one.

"In one of the most moving pages of the Gospel, Jesus sees Mary weeping for the death of her brother Lazarus" and he, too, begins to weep, the pope said. "If God could weep, then I too can weep, in the knowledge that he understands me."

But in addition to offering consolation to believers, Jesus' tears encourage believers to open themselves to compassion for others, he said. "The tears of Jesus serve as an antidote to my indifference before the suffering of my brothers and sisters. His tears teach me to make my own the pain of others, to share in the discouragement and sufferings of those experiencing painful situations," particularly the death of a loved one.

"Jesus' tears cannot go without a response on the part of those who believe in him," Francis insisted. "As he consoles, so we, too, are called to console."

Turning to the copy of the Weeping Madonna of Syracuse, a Marian image chosen especially for the prayer service, the pope said: "At the foot of every cross, the mother of Jesus is always there. With her mantle, she wipes away our tears. With her outstretched hand, she helps us to rise up, and she accompanies us along the path of hope."