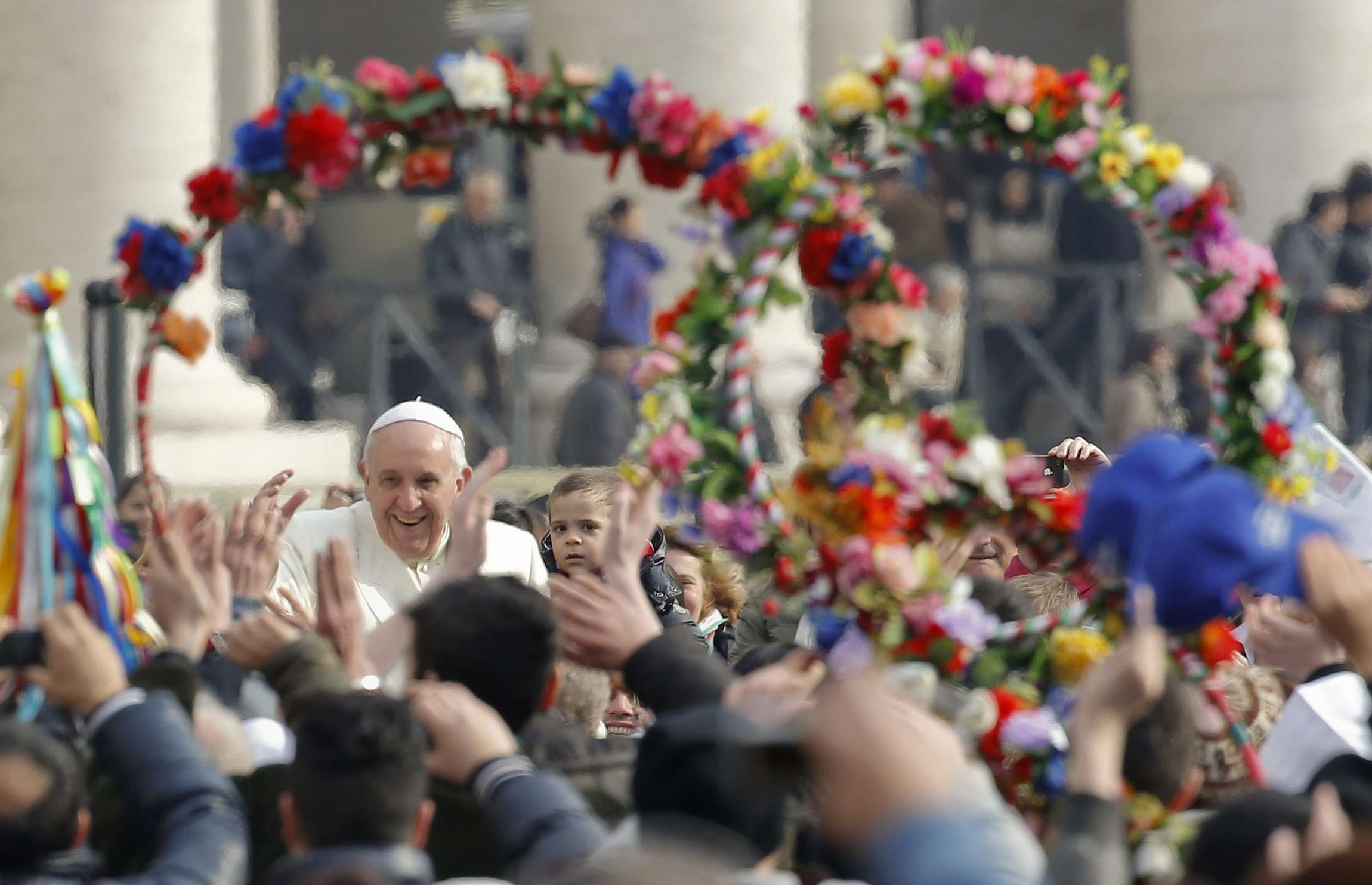 Some people worry receiving the sacrament of the anointing of the sick "brings bad luck" and "the hearse will come next," the pope said. "This is not true!"

The sacrament brings Jesus closer to those in need, strengthening their faith and hope, he said Feb. 26 during his weekly general audience in St. Peter's Square.

The pope thanked the estimated 50,000 people who attended the outdoor audience despite weather forecasts of rain. "You came anyway; you're courageous. Way to go!" he said, as the wind blew big gray storm clouds overhead.

Continuing a series of audience talks on the sacraments, Pope Francis focused on the sacrament of the anointing of the sick, which, along with the prayer of the priest, expresses God's mercy and presence to those who are sick, suffering and elderly.

Formerly known as extreme unction or "the last rites," it had once been seen as a ritual only for those who were in danger of or at the point of death. A more expanded use to provide spiritual strength and healing for the sick and elderly was promoted by the Second Vatican Council.

Pope Francis said the sacrament "permits us to touch with our hands God's compassion for humanity" and bring God's healing presence to those who are suffering.

"However, this mustn't let us fall into an obsessive search for a miracle or the presumption of always and in every case being able to be healed," he said.

The sacrament "is the assurance of Jesus being close to the sick and the elderly," he said, adding that "everyone over the age of 65 can receive this sacrament."

Often times when people think about whether they should call a priest to come to the bedside of someone seriously sick or suffering, he said, there might be objections and concerns that it could frighten the person who is ill.

"Why? Because there's this idea that when someone is ill and the priest comes, after him, the hearse will come next," the pope said to applause.

The superstition is not true, the pope said; when the priest goes to the sick person, "it is Jesus who comes to bring comfort, to give strength, to give hope and help, also to forgive sins and this is very beautiful."

"Do not think this is taboo" to call the priest over, he said, "because it is always beautiful knowing that in moments of pain and sickness we are not alone."

"The priest and those who are present during the anointing of the sick, in fact, represent the whole Christian community, who, as one body with Jesus, embrace the person who is suffering and his or her family members," providing them with strength and hope and sustaining them with their prayers and love, Pope Francis said.

The sacrament "reminds us that nothing, not even evil and death, can ever separate us" from Christ and the saving power of his love, he said.

The text of the pope's audience remarks in English is available online at www.vatican.va/holy_father/francesco/audiences/2014/documents/papa-francesco_20140226_udienza-generale_en.html

The text of the pope's audience remarks in Spanish is available online at www.vatican.va/holy_father/francesco/audiences/2014/documents/papa-francesco_20140226_udienza-generale_sp.html