Pope: During Holy Week, ask which Gospel character you resemble 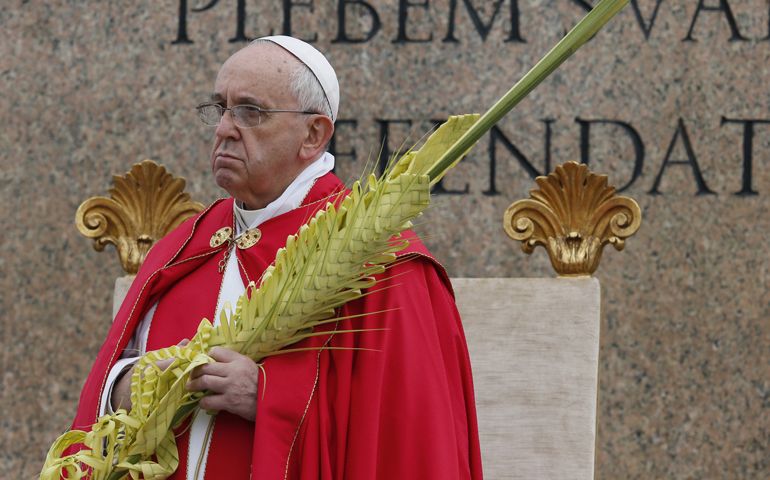 Pope Francis holds palms at the start of Palm Sunday Mass in St. Peter's Square on Sunday at the Vatican. (CNS/Paul Haring)

Vatican City — Preceded by young people and clergy waving tall palm branches, Pope Francis began his Holy Week liturgies by encouraging people to ask themselves which personality in the Gospel accounts of Jesus' passion, death and resurrection they resemble most.

"Where is my heart? Which of these people do I resemble most?" Pope Francis asked Sunday as he celebrated the Palm Sunday Mass of the Lord's Passion.

Joined by thousands of young people for the local celebration of World Youth Day, the pope set aside his prepared homily and instead urged people to adopt an exercise recommended by St. Ignatius of Loyola, founder of the Jesuits: imagining themselves as one of the characters in the Gospel story.

Throughout the Holy Week liturgies -- Palm Sunday, Holy Thursday, Good Friday, the Easter vigil and Easter morning Mass -- "it would do us good to ask one question: Who am I? Who am I before my Lord?" the pope said.

"Am I able to express my joy, to praise him?" the pope asked. "Or do I keep my distance? Who am I before Jesus who is suffering?"

Judas betrayed Jesus for 30 pieces of silver. "Am I like Judas?" the pope asked. "Am I a traitor?"

"The disciples didn't understand anything, and they fell asleep while the Lord suffered," he said. "Is my life one of sleeping?"

When Jesus was about to be arrested, one of the disciples cut off the ear of the high priest's servant. "Am I like that disciple who wanted to resolve everything with the sword?" the pope asked.

"Am I like those courageous women and like Jesus' mom, who were there suffering in silence?" he asked.

Pope Francis did not offer explanations but asked people to let "these questions accompany us throughout the week."

Prisoners from a jail in Sanremo, Italy, sent Pope Francis a new pastoral staff, which he used during the Mass. Carved out of olive wood, it featured a simple cross on top and elements from Pope Francis' coat of arms: the official seal of the Society of Jesus, an eight-pointed star symbolizing Mary and the spikenard flower, a symbol of St. Joseph.

At the end of Mass, turning his attention to the young people, Pope Francis presided over the transfer of the World Youth Day cross from young representatives of the archdiocese of Rio de Janeiro, site of World Youth Day 2013, to youths from the archdiocese of Krakow, Poland, where the next international gathering with the pope will be held July 25, 2016, to Aug. 1, 2016.

The handoff of the cross marked the 30th anniversary of Pope John Paul II's entrusting it to Catholic youths, asking them to "carry it throughout the world as a sign of Christ's love for humanity," Pope Francis said. Noting that he would declare Pope John Paul a saint April 27, the pope repeated an announcement made in February that St. John Paul, who began the World Youth Day celebrations, would become the gatherings' "great patron."

After the Mass and the recitation of the Angelus, the pope waded into the crowd, blessing many of the young people and posing for photographs with some of them.

Pope: During Holy Week, ask which Gospel character you resemble

Jesus 'knows what you are going through,' Cardinal Dolan tells inmates

Finding strength, community in the washing of feet