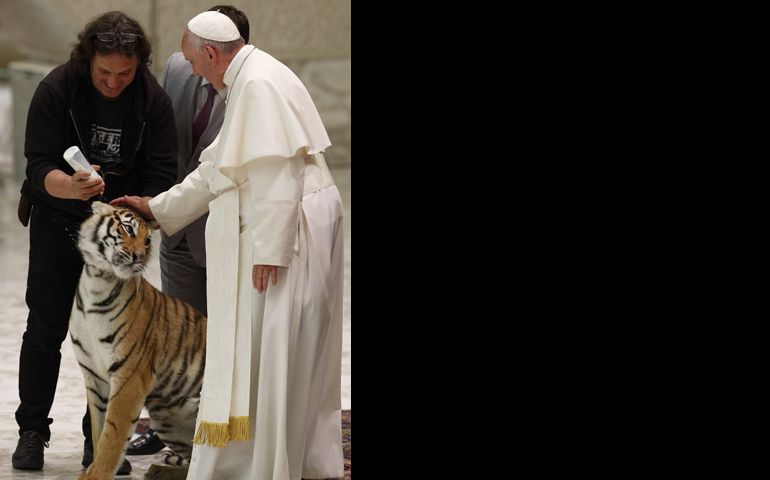 Pope Francis pets a tiger during an audience with circus members in Paul VI hall at the Vatican June 16. (CNS/Paul Haring)

"You cannot imagine what good you do, the good you sow," he said June 16 during a special audience celebrating the jubilee of circus and traveling-show performers.

While they may never know the impact they truly have on people, "you can be sure," he said, that "you sow these seeds that do many people good."

Hundreds of performers, family members and supporters gathered in the Paul VI hall as part of a two-day pilgrimage to Rome for the Year of Mercy.

Even a tiny black panther cub and a rather large six-month-old tiger attended the papal audience.

To the tune of "O Sole Mio" played by an organ grinder, an animal wrangler used a baby bottle filled with milk to lure the leashed tiger toward the pope, who was invited to pet the enormous cat.

Looking hesitant at first, the pope approached and touched the animal from behind, which caused the skittish cat to dart sideways in surprise.

After assistants helped reassure both pope and feline, Francis stroked the tiger, who was still straining to drink the last of its milk. The event's ringmaster and MC said the pope's white clothing is what caught the cat off-guard.

In his talk, the pope noted the performers' special ability to bring a smile to a child's face, brighten a lonely person's day and draw people closer together.

"You can also frighten the pope" when petting a tiger, he said. "You are powerful!" he said to great applause.

Calling them "artisans" of wonder, beauty and celebration, he praised their abilities to lift people's spirits and offer communities "healthy entertainment."

The often difficult life of being on the road was "a special resource," he said, because it meant they -- like Christ -- could bring God's love, joy and embrace to even greater numbers of people, especially those on the margins of society.

He thanked them for offering shows and free admission to the poor, the homeless, prisoners and disadvantaged kids during the Year of Mercy.

"This, too, is mercy: sowing beauty and happiness in a world [that is] sometimes gloomy and sad."

The pope urged local parishes to reach out to traveling performers, offering them the sacraments and eliminating prejudicial attitudes that marginalize them. He also invited the entertainers to deepen their faith, especially by handing on God's love to their children and others.

Also showcasing their talents for the pope were: the Black Blues Brothers troupe -- five Kenyan acrobats wearing suits, hats and ties, who performed towering human pyramids; and Bruno Leone, dressed as the Neapolitan "Punch" character, who performed a puppet show reenacting the story and beheading of St. Januarius.