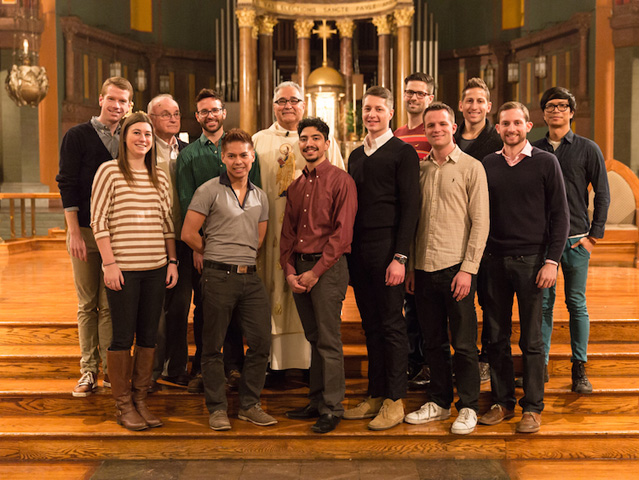 The final image of "Owning Our Faith"

A new short documentary began making the rounds on the Internet last week. "Owning Our Faith" is a 14-minute film that explores the struggle among gay, lesbian, and transgender individuals for inclusion in the Roman Catholic church.

The film is compelling not only because of its high production values, but because of its depiction of LGBT people in various stages of relationship with the institutional church. Some struggle with the church's teaching; others proudly argue against it. Some marry; others stay celibate. What unites these voices is a common desire to be openly welcomed and affirmed in the church they call home.

"Owning Our Faith" is "a project led by a group of young, social-media savvy Catholics," according to the film's press release. Many of these young adults belong to Out @ St. Paul, a gay and lesbian ministry of St. Paul's Church in the Lincoln Center neighborhood of Manhattan. Paulist Fr. Gilbert Martinez, pastor of St. Paul's, is seen celebrating Mass in several of the documentary's sequences.

Though St. Paul's is hardly a poor parish, the idea for the film emerged out of parishioner Michael Tomae's work on the margins. The press release notes that Tomae, the film's director and executive producer, "was inspired to act after his volunteer work with Covenant House, a homeless shelter for youth. Many of these young adults were disowned by their Christian families because of their sexuality or gender identity. Tomae was inspired to start a larger conversation, with the primary focus being that one's faith is not fully wrapped up in one's sexuality."

"The Catholic church probably thinks it is accepting of gay people because its message is that gay people exist and we should love them and not discriminate against them. But because the church also tells gay people, essentially, that they need to be celibate, what the church is saying is that you cannot live fully. You can be gay, but you can't live that life. That inherently is discriminatory."

Howes describes the double trouble of being transgender in a Catholic community and being Catholic in the transgender community. Williamson recounts the remarkable welcome he received early in his transition in the unlikeliest of places: a Catholic confessional.

The priest "called me a brother in Christ," Williamson recalls. "To have that come from the Catholic church, to have someone acknowledge me for who I am and to say I love you all the same ... was life-saving for me. I'm grateful to God that he was there that day."

"Owning Our Faith" also manages to get some welcoming words from Fr. Patrick J. Conroy, Chaplain to U.S. House of Representatives, who, near the top of the film, admits that "human beings procreate male-female, but human sexuality isn't just about that. It's about so much more, which is self-evident." (Conroy identifies as a straight male on the film's website.)

Though the film is predominately populated by Catholics in their 20s and early 30s, 74-year-old Mike Roper brings insights about God's creation of LGBT people. Parents and grandparents also offer poignant words about accepting LGBT children.

The documentary also achieves some diversity. Though there are no African-Americans among the cast, there is representation from Latin-American and Asian-American Catholics.

The filmmakers' commitment to inclusion stumbles, however, in its lack of lesbian voices. Though there is a young gay woman who at the beginning of the film offers one sentence about coming out in college, the only other lesbian in the film is Eve Tushnet, a woman who has distinguished herself among LGBT Catholics for her commitment to honoring the church's teaching on homosexuality.

"I would not say the church teachings are wrong. I do accept them," Tushnet says at one point in the film.

While I agree that it was wise to include at least one LGBT Catholic who follows church doctrine on this issue, it is unfortunate that there was not a broader role for women who do not accept it.

Much of "Owning Our Faith" was filmed in Manhattan. Surely in a city that seems as sexually diverse as it does Catholic, the filmmakers could have found a lesbian couple or queer woman capable of articulating the goodness of sexually active same-sex relationships.

The film's lack of women is further reinforced by its final image, which shows 11 proud men and one woman standing around Father Martinez in the sanctuary of St. Paul's.

There are good reasons why it is harder to find lesbians inside Catholic churches. Lesbians, of course, are twice-stricken by the church's teaching on gender complementarity. They are kept from full participation in the life of the church not only because of their sexual orientation, but also because of their very sex.

Perhaps that's a subject for another documentary, but given the ongoing criticism of Pope Francis' limited view of women, the film's lack of queer women is felt even more acutely.

Speaking of the pope, the filmmakers hope this film will eventually reach Francis himself. According to the website of St. Philip Neri Parish and Paulist Center, Father Martinez planned to show the film to the pope during a private audience earlier this week.

News of the pope's reaction will have to wait for now. But regardless of whether Pope Francis gives the film a thumbs-up or a thumbs-down, the film is poised to inspire countless LGBT people who face alienation from their families and injustice at the hands of their churches.

"Owning Our Faith" may also comfort older Catholics who fear that most young adults have lost interest in the church. The subjects of this documentary have had to reckon with their religious beliefs and commitments at levels that are often unnecessary for their straight peers. The film demonstrates a truth that I have learned from working with LGBT Catholics: Sometimes, being rejected by the church leads you into a deeper and more mature faith.

Not every viewer will agree with every opinion expressed in "Owning Our Faith," but only the most rigid of believers would question the love these Catholics have for their church.

To view the film and film extras, check out the "Owning Our Faith" YouTube channel. Spanish and Italian versions of the film can also be found there.