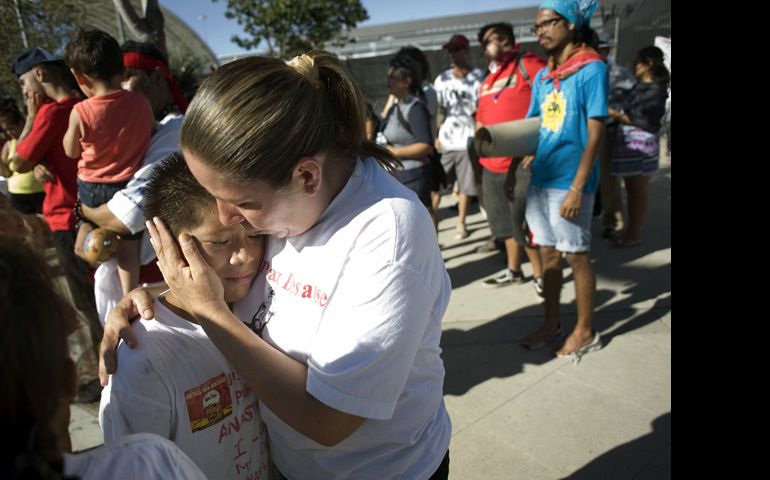 Daniel Hernandez gets a hug from his mother, Maria Puga, during an Aug. 16 rally to mark the end of the Trail for Humanity immigrant rights caravan in San Diego. (CNS/EPA/David Maung)

Washington — For the first time, federal funding will help pay for unaccompanied minor immigrants to get legal assistance, including through Catholic agencies that will receive a little more than half of $4.2 million in grants for this fiscal year.

An additional $4.8 million will be allocated for the legal program for the 2015 fiscal year.

The Obama administration also announced plans in early October to allow minors to apply for refugee status from within El Salvador, Guatemala and Honduras, intended to prevent them from making the dangerous trek to enter the United States illegally. Tens of thousands of such minors have done so in the last year, overwhelming the U.S. Border Patrol and the Office of Refugee Resettlement under Health and Human Services, which assumes care for unaccompanied minors after the Border Patrol processes them.

The legal assistance and refugee programs were among the proposals supported by Catholic agencies and others as a way of addressing a surge of minors who have been coming into the country without an adult relative or guardian.

Because immigration law violations are civil offenses, not crimes, there is no requirement to provide people facing deportation with lawyers if they cannot afford one. Peck cited a U.N. study that found at least 60 percent of the unaccompanied minors from Central America are eligible to be considered for some kind of relief from deportation. Among the possibilities are asylum, protection as victims of human trafficking or victims of violence and a program for minors who have been abandoned by their parents.

But only a small fraction of those have attorneys, and without legal assistance, an individual is unlikely to be able to meet "the complex, technical requirements," Peck said. "It takes a lot of research."

The Catholic Legal Immigration Network Inc., or CLINIC, said in a press release Thursday that the funds would be used by CLINIC affiliates in the archdioceses of Los Angeles, Galveston-Houston, Miami, Baltimore, New Orleans and Washington and the diocese of Arlington, Va.

Jeanne Atkinson, executive director of CLINIC, said in the release that "children need to have a fair opportunity to explain why they deserve to stay in the United States."

Atkinson told CNS that it's unclear how many people CLINIC affiliates have helped among the more than 66,000 unaccompanied minors who had been apprehended crossing the U.S. border through August. She said that counting legal orientations for the custodians of the minor immigrants, thousands of people have obtained some kind of assistance from CLINIC in the last year.

Resources to provide legal help has come from a variety of sources, Atkinson said, including diocesan funds, some government and private grants, and Justice AmeriCorps, a partnership between AmeriCorps, the national community service program, and the Department of Justice that was launched this summer.

Among CLINIC's funding sources was a grant by the MacArthur Foundation to do online training on how to represent minors who are in removal proceedings.

CLINIC's release said that without professional advice or legal representation, "a child has very little chance of fighting government efforts to deport him or her. This is particularly troubling given that some children face return to countries where they risk mistreatment, abuse and even death."

Among CLINIC's efforts to help the unaccompanied minors has been free immigration law training for pro bono attorneys and non-attorneys who may act as advocates for the children. For example, recent training sessions have taught advocates how to interview and represent unaccompanied children and how to apply for various types of relief, the CLINIC release said.

The USCCB on behalf of the church's legal aid agencies will receive $2.2 million and the U.S. Committee for Refugees and Immigrants will receive $2 million in what are called supplemental awards for providing legal services to unaccompanied minor children, according to an HHS announcement. Those funds are part of what HHS has proposed as a $9 million project for funding direct legal representation, that will provide legal services to 2,600 children.

Details were still being worked out for the refugee processing centers. Normally, people apply for refugee protection in a country other than their own, once they have fled their homelands. The in-country processing centers were proposed as a way of allowing minors who may be eligible for some kind of protection to apply for it without the risk and expense of traveling alone.