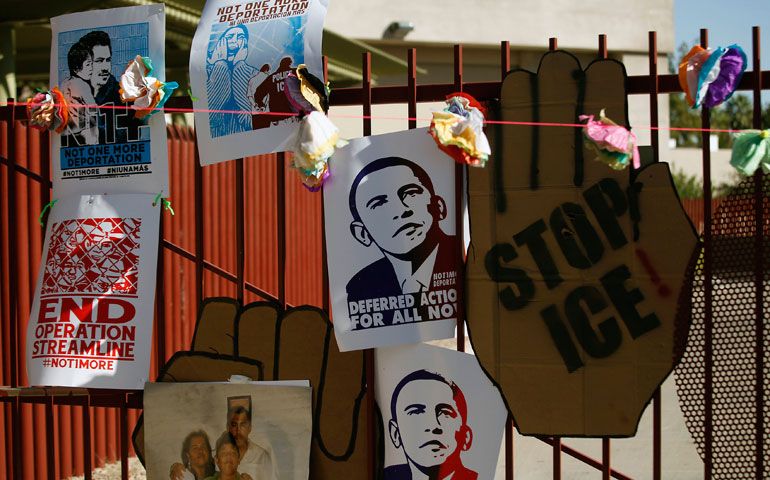 Protesters' signs hang at the entrance of the Immigration and Customs Enforcement headquarters in Phoenix Oct. 14, 2013. (Newscom/Reuters/Joshua Lott)

As the current congressional session dwindles away, immigration reform looks dead. With the House Republican caucus in disarray following the electoral defeat of Majority Leader Eric Cantor of Virginia and the hardening anti-immigrant posture of the party, the Senate's comprehensive reform package likely won't get passed. This means any overhaul appears dead until after the presidential elections in 2016.

This is bad news for immigrants and terrible news for employers. Immigrants will continue to live in fear of deportation and companies will continue to be afraid of the "silent raids" by Immigration and Customs Enforcement (ICE) that have become so widespread under President Barack Obama.

About two years ago, our company, Emerald Packaging Inc., which manufactures plastic packaging for food, suffered a silent raid. ICE came to our Union City, Calif., headquarters without notice and hustled off copies of our I-9s, the forms employees must fill out detailing their right to work in the United States.

ICE checks social security numbers and work visa status. Anyone whose name does not match the declared social security number or whose work visa has lapsed must be terminated. Companies face stiff penalties for such technicalities as putting information in the wrong box on the form -- a common error, since the I-9 is complicated. Owners can be charged with felonies if they knowingly hired those living in the U.S. illegally.

Our audit took three weeks but has left wounds that will never heal. We lost 18 people out of a staff of 200. They were some of our longest-tenured employees, the best machinists and operators. The result? Productivity fell and costs zoomed. Those affected lost well-paying jobs. Some suffered home foreclosures and battled depression and anxiety. I felt so helpless to protect them and so angry at the financial impact on our business that I sought grief counseling. It did not work.

We had no idea if we had on staff immigrants who were in the U.S. illegally. For many years, no system existed to check. The government now provides the E-Verify system, which matches social security numbers, but the law does not allow checking on current employees. Among our 180 factory employees, we have many immigrants. Many arrived years ago, bought homes, raised families, paid taxes and contributed mightily to our company.

Take Miguel Gonzales. He had worked with us for more than 20 years, maintaining and troubleshooting the toughest machines in our company. Miguel was a model employee, never missed a day, able to handle his machines without help from our overworked maintenance department. He was also a strong leader, willing to speak his mind when he felt employees weren't being treated fairly or managers were playing favorites. He made more than $18 an hour plus full benefits, including medical coverage for his family.

Word of the raid spread through the factory. Within 48 hours, nine employees identified themselves as being in the country illegally. Because the law says we cannot knowingly employ such people, we had to let them go. Over the following weeks, a steady trickle confessed. By the time ICE came back and told us that 18 of our employees were not eligible to work, 17 had outed themselves, including Miguel. Fortunately, ICE found the company had done nothing wrong and we were not fined.

Without Miguel, bag department productivity fell, about 4 percent during the quarter after he left. Other departments suffered too. The head of our ink department, Sergio, who had worked with us for more than 15 years, ended up out the door despite living in the country since childhood. Sergio earned well over $20 an hour and was famous for finding unique ways to save money. The next quarter after we lost him our ink costs rose 10 percent. His replacement simply lacked his inventiveness. During the next two years, Sergio's dismissal cost the company more than $600,000, money that could have been invested in equipment that would create jobs.

Fast-forward two years. Six of the 18 whom we had let go are back. They achieved legal status through various means. One received his work permit due to illness of a child. Another was already en route to a green card. Two achieved status through another family member.

Sergio, who promptly cut ink costs 10 percent upon his return, turned out to be a citizen whose status had been confused by the movement of his family back and forth across the border and improper record-keeping by our government. It took him two years to rectify the problem, during which he could have been deported anytime. His wife, overcome with anxiety, ended up on medication.

Most of the remainder, I think, found other jobs. I know two returned to Mexico, including Miguel. He simply decided he hated living in the United States. He told me he could not understand a country that persecuted hardworking, tax-paying individuals, a country that wanted Mexican labor but pretended otherwise. He was tired of looking over his shoulder. He took his family, including three American-born children, and left.

Why didn't at least the six who gained status do so earlier? If you knew the immigration maze, you might understand. Many Hispanics do not trust the system. They are routinely gamed by lawyers who demand money up front and then never do anything. The client does not feel they can sue because they are without status. Then there is the system itself, which can take two identical cases and make completely opposite rulings, leading to a green card for one, and deportation for another. Cost is also a barrier. Getting status can cost more than $20,000.

Given my company's experience, I wonder how many of the 11 million immigrants living in this country illegally have a path to legalization. Six of our 18 did, or 30 percent. It is a small sample pool, but what if 30 percent of such immigrants could gain status but are simply too afraid or confused? If so, more than 3 million people could be legalized today regardless of what Congress does.

I am the grandson of Irish immigrants who fled poverty and civil war during the 1920s. Undoubtedly, the door would have been closed to them under today's system. Instead, my paternal grandfather, who had very little education, worked as a laborer and sent my father to college. He started a successful business and has contributed to society through extensive charitable activities. Clearly, our country would be poorer without his success and that of others like him, the sons and daughters of immigrants.

The irony is that silent raids have taken off under a Democratic president, one who says he favors immigration reform. Under the Obama administration, ICE I-9 audits have gone stratospheric. Since 2008, more than 12,000 raids have been conducted, with more than 300,000 people losing jobs. No other period in our history comes close.

Now the fate of immigrants waits on Congress. The Senate passed a good bill. It would provide a path toward citizenship for people like Miguel. Anything that keeps America productive cannot be so wrong. We need hard workers. Many Americans, especially in California, no longer want or have the skills for factory jobs, not even well-paying jobs like those we offer. Accepting this reality leads to only one answer: immigration reform. The House, especially Republican members, only cause pain to immigrants and harm to our economy the longer they refuse to act.

[Kevin Kelly is CEO of Emerald Packaging in Union City, Calif., and a former reporter for Business Week.]