Death over a cup of water? 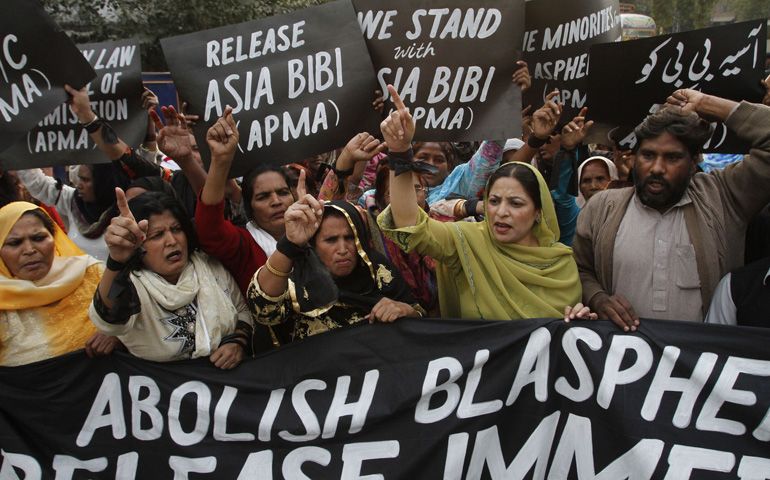 Protesters hold up placards demanding the release of Asia Bibi, a Pakistani Christian woman who has been sentenced to death for blasphemy, at a 2010 rally in Lahore. (CNS/Reuters/Mohsin Raza)

Asia Bibi is still in jail. It's more than nuts. It's sick.

In 2009, this wife of a brick maker and mother of five went berry picking to earn an extra 250 Pakistani rupees near her simple home in Punjab. That would be about $2.50.

The end of the story: She is sentenced to death for blaspheming against the Prophet Muhammad.

According to Blasphemy, a book co-written with French television journalist Anne-Isabelle Tollet that tells Asia's story, it started when she used a common cup to take water twice from a well in the berry field. Another woman shouted that Asia, a Christian, made the water haram, or unclean for Muslims.

All the other berry pickers were Muslim.

They say it was more than 100 degrees that day, so maybe the heat pushed the rage button on either side of the discussion. Perhaps Asia did not think of or did not know that detail of the laws of cleanliness. She was thirsty. She took two cups of water. And when confronted, she said to the accusers, "I think Jesus would see it differently from Muhammad."

Not the best comment to make on a hot June day to a crowd of angry women in the second-most-populous Muslim-majority country. There are almost 3 million Christians and almost 3 million Hindus in Pakistan. But the other 174 million people, or 97 percent of the population, are Muslim.

The confrontation by the well got nasty. They called Asia a filthy Christian and Jesus a bastard. They challenged her to convert to Islam. She countered, "I'm not going to convert. I believe in my religion and in Jesus Christ who died on the cross for the sins of mankind. What did your Prophet Mohammad ever do to save mankind? And why should it be me who converts instead of you?"

Then it got worse.

Somehow, Asia escaped alive, but five days later, she went back to pick some berries and earn some rupees. A mob beat and dragged her to the law, which some months later found her guilty of blasphemy and sentenced her to death.

They say Asia is the only woman so sentenced in this century. She has been waiting in filthy prison cells for nearly four years now, first an hour away from her family, now another five hours away. Her appeal sits in some court or another.

It's not that her situation has gone unnoticed. Pope Benedict spoke publicly on her behalf. France offered her political asylum. The United Nations has heard all about her.

"It is a bit like being an orphan in your own country," Asia Bibi said through a go-between to Tollet, who put Blasphemy together with Asia's own words. Tollet reported from Islamabad for three years until the book came out in French in 2011. An English translation appeared in the United Kingdom a year later. Now, a small Chicago publisher has it in paperback and for the Kindle.

There is a book. There are websites. There is even a petition. But nothing really has been done to save this simple woman, now in her early 40s and suffering from a swollen foot in a stinking, windowless cell maybe 5 feet wide.

Before they moved her a few months ago, Asia lived on food her husband brought. Now she takes the common prison meals, always fearing poison. There is a 5,000 euro bounty offered by a Muslim cleric to the one who kills her.

Did I mention how friendly the United States is with Pakistan? Since Asia Bibi's been in jail, the United States has sent more than $3.5 billion dollars in "civilian assistance." According to the U.S. Department of State, regular "security assistance" -- interrupted during an eight-month spat -- resumed not long ago. More recently, the United States picked up its "Strategic Dialogue with Pakistan in order to foster a deeper, broader, and more comprehensive partnership."

Maybe the United States can include Asia Bibi in their dialogue? What is the craziness that allows her situation?

She is not the only person -- male or female; Christian, Hindu or Muslim -- stuck in some Pakistani prison suffering because of real or imagined charges of blasphemy. The sharp edge of the law within that supposedly secular state cuts anyone in its path.

Disrespect for another's religious belief is a deeply serious affliction in any situation or society. Prejudices exist. Jobs and perquisites and preferential treatments can sway back and forth according to the beliefs of the powerful. That is the human condition. But four years' inhumane imprisonment for a simple woman is more than enough.

I think Jesus and Muhammad would see it exactly the same way.

[Phyllis Zagano is senior research associate-in-residence at Hofstra University and author of several books in Catholic studies. She will speak Sept. 20-21 at Wisdom House in Litchfield, Conn.; Oct. 13 at Thomas More Chapel of Yale University; and Oct. 23 at Boston College. Her recent books include Women & Catholicism (Palgrave-Macmillan), Women in Ministry: Emerging Questions about the Diaconate (Paulist Press) and Women Deacons: Past, Present, Future (with Gary Macy and William T. Ditewig, Paulist Press).]

Editor's note: We can send you an email alert every time Phyllis Zagano's column, "Just Catholic," is posted. Go to this page and follow directions: Email alert sign-up.

Death over a cup of water?

'Baad' news around the world

It's not (only) about contraception