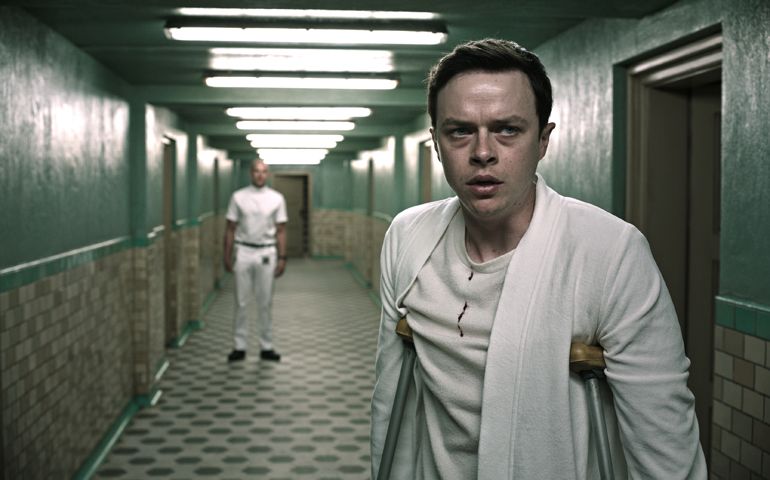 Dane DeHaan stars in a scene from the movie "A Cure for Wellness." (CNS/Fox)

The information competition now playing on world media echoes in "A Cure for Wellness," the violent new psychodrama distributed by Twentieth Century Fox. At the start of the movie's R-rated creepiness, a corporate board dispatches a young executive to a toney Swiss "wellness spa" to retrieve the CEO, who inexplicably refuses to return to the high-stakes, glass-enclosed world of finance.

The spa looks like a nice enough place. It is Switzerland, after all.

Predictably, things are not what they seem.

Before we get to that, we need to examine the cinematic hall of mirrors Twentieth Century Fox set up to promote the film. OK, not examine, because that means we enter the world of fake news and alternative facts. What is real and what is not real?

You see, in an effort worthy of Lewis Carroll, the film's promoters set up several fake news websites that posted false "facts" worthy of … well, we will leave it at that. Take your pick.

Then there was the Houston Leader's headline: "Trump Signs Executive Order Issuing 90-day Ban on Childhood Vaccinations." If you missed these and other Faceoook-level "news" items, that may be because the fake news sites — including the fictional Houston Leader — have gone to that great megabit junkyard in the sky. (There is always the trusty "waybackmachine," now at archive.org, if you really want to look.)

Of course, there is always the real news, which in many instances is reporting false facts delivered by individuals even as they complain about media not reporting true facts.

The tangled knots surrounding the problems of truth vs. fiction are neither easily cut nor untied. Usually knitted with varying strands of perspective, they shade or even block unfiltered reality. So folks now tend to turn to direct sources for information. But the direct sources are not always presenting verifiable facts. Often, they either present "fake news" or create false dichotomies.

Even FOX News, presumably always ready to lean a little to the right, broadcast an eight-minute rant by anchor Shepard Smith that boiled down to "I do not believe what is going on. Repeating falsehoods does not make them correct."

Is there a left-leaning slant to some media, allowing them more room to sneak opinion into their reporting? Of course there is. But, whether it is reporters desperately asking for facts they cannot get, or pundits of every level creating their own "facts," it is the rest of us who suffer.

One critic said that the truly bizarre "A Cure for Wellness" film is about "people who are happy to remain removed from the world, not realizing that they are involved in something truly dreadful."

From the outside looking in present political debate is quite bizarre. Consider, if you will, that it seems to star people removed from the world and who do not realize they are involved in something dreadful.

The problem, of course, is that this is not a movie.

[Phyllis Zagano is senior research associate-in-residence at Hofstra University in Hempstead, N.Y. Her books include Sacred Silence: Daily Meditations for Lent and In the Image of Christ: Essays on Being Catholic and Female.]

This time Trump's lie will matter