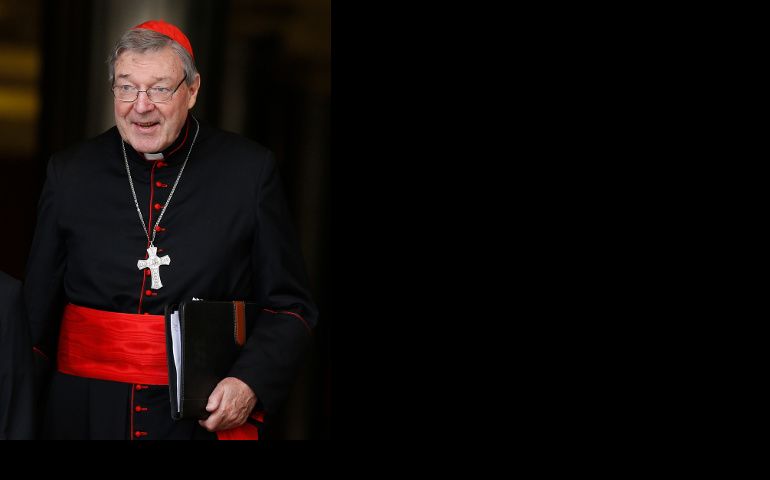 Cardinal George Pell of Sydney leaves a meeting of cardinals with Pope Francis in the synod hall at the Vatican Feb. 20. The Vatican announced Feb. 24 that Pell has been appointed by Pope Francis to head a new Vatican office overseeing Vatican finances. (CNS/Paul Haring)

Will Pope Francis’ new money lord make any difference? Australian Cardinal George Pell, 72, who moves to Rome next month to head a new Vatican office, is not known as a financial expert. Australian sex-abuse critics call his appointment a golden parachute, one that may touch down in a palatial suite in the AUS$30 million “Domus Australia” guesthouse Pell dedicated in 2011.

Of course Francis is trying to do the right thing. Religion and money are never a good mix, and a long history of scandals only complicates the task of getting the Vatican bureaucracy in order. As Cardinal Prefect of the new dicastery, the Secretariat for the Economy, Pell reports directly to the pope. He also reports to the new Council for the Economy, eight cardinals and seven lay experts projected to analyze internal controls, transparency, and governance. In addition, there will be an Auditor-General empowered to check the books of any Holy See component.

Pell’s mandate appears to be oversight of any money the Vatican touches, particularly that in the Administration of the Patrimony for the Holy See (APSA), which manages Vatican-owned money and property, and the Institute for Religious Works (IOR), also known as the Vatican Bank, which manages between 6 to 7 billion Euro* in cash and securities owned by various clergy, religious orders, dioceses and church-affiliated persons and institutions.

Both are ripe fields for fraud, waste and abuse. The lack of transparency at the Vatican Bank, which has 19,000 clients worldwide and does a quarter of its business in cash, has long been cause for scandal. No one knows where it invests its funds. In 1982, the head of the collapsed Banco Amrosiano, Roberto Calvi, was found hanged in London. The Vatican Bank owned controlling shares of Banco Ambrosiano. More recently, Italian police arrested Msgr. Nunzio Scarano, former head of accounting at APSA, on suspicion of using the Vatican Bank to move money for “others.” He was also accused of trying to smuggle $20 million Euro by private plane from Switzerland.

Moving money secretly is a time-honored sport, usually played on the fields of Switzerland, Lichtenstein, the Cayman Islands and the Isle of Mann. The combined forces of the world banking community have rumpled those fields — no more numbered Swiss bank accounts, for example — and computerization of accounts creates easier tracking methods than paper deposit slips.

But money is still as slippery as ever. A good accountant can hide — or steal — about 10 percent or anything. And, if truth be told, there are lots of folks who touch church money and just can’t let go of it. I am reminded of a telephone call from the president of a parish council: “Is the pastor allowed to take $250 a week out of the collection before it is counted?” Then there was the pastor who exposed an employee scheme to purchase fine art with church funds. He fired the employee, and kept the art. Or, the storehouse of rice and beans meant for the poor found to be a Potemkin village. Church employees had sold most of the donated goods and pocketed the money. These genuinely heartbreaking stories multiply over the years and around the world. Temptation comes in many forms, but one size fits all.

On the larger scale — it has 33,000 accounts — the Vatican Bank says it is certain it is not money laundering for terrorists. It is probably not, but there could be lots of secrets in its sovereign accounts. And intrigue remains in long memories at the Vatican. In one year, as head of Vatican City State, Archbishop Carlo Viganò turned a $10 million deficit into a $44 million surplus — and got fired. He complained to the pope: "Blessed Father, my transfer in this moment would provoke confusion and discouragement for those who thought it was possible to clean up so many situations of corruption and abuse of office.”

Viganò is a civil and canon lawyer. Whether Pell, a historian of early Christianity ordained as bishop in 1987 is up to the job remains to be seen. He is a former football player and son of a heavyweight boxing champion, so his imposing stature may help. He has been photographed in a cappa magna, but his new fashion statement seems to be a pewter pectoral cross. Even so, unlike new Nicaraguan Cardinal Leopoldo José Brenes when he traveled to the consistory, he is not likely to board his flight to Rome wearing blue jeans.

[Phyllis Zagano is senior research associate-in-residence at Hofstra University and winner of the 2014 Isaac Hecker Award for Social Justice. Her newest books are Mysticism and the Spiritual Quest: A Crosscultural Anthology and Ordination of Women to the Diaconate in the Eastern Churches. She will speak March 13 at Rockhurst University in Kansas City, Mo.; April 5 at St. Ursula Academy in Cincinnati, Ohio; and May 6 at St. Francis Xavier Church in New York City.]

[*Currency updated from an earlier version of this story.]​

The past, present and future of the Vatican bank