How can we stop the anger, end the fear? 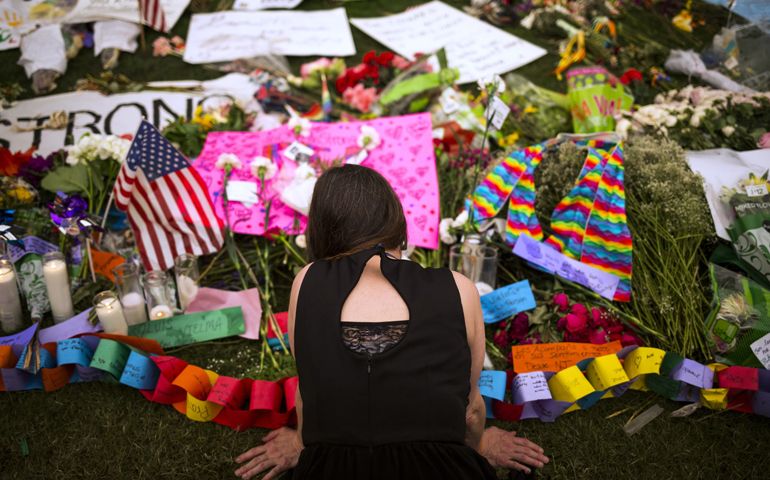 A woman visits a memorial in downtown Orlando, Fla., June 14, that honors the victims of the mass shooting at a gay nightclub. (CNS/John Taggart, EPA)

In France, someone slit the throat of an 84-year-old priest. In Florida, some others murdered club goers. Folks are worried in Fiji and Finland. The rest of the world's alphabet is the same.

We're all scared to death and it's not only because of ISIS. The world is imploding in its anger, and fear is flooding the planet. We need to stop it. If we cannot stop the anger at its sources, at least we can stop feeding it in ourselves. No one needs to jump on the anger bandwagon.

Take a look at this evening's television listings. Chances are the only prime-time programs rated for general audiences are "Jeopardy!" and "Wheel of Fortune." Most everything else is TV-PG: Parental guidance suggested, or TV-14: Parents strongly cautioned, or TV-MA: Mature audience only. "Watch out" should more honestly be "don't watch." Too much on television does not belong in anyone's head.

Want to avoid crime, sex, and violence? Maybe watch the news? OK, maybe not the news. Want to see respectful commentary on political issues? How about the conventions? Oh, dear, not the conventions.

Angry politicians clogged this year's news, and things will only get worse. Elected officials and others jumped into the sewers during the U.S. presidential primaries, slinging mud and worse at each other and, directly or indirectly, at us.

It seems the goal of the presidential nominating conventions is to ensure that everybody gets angry and stays angry at everybody else.

So, where are we? Is this cause or effect? Or is it both?

The dividing lines spill out beyond the convention floors. Republicans vs. Democrats can quickly morph into white vs. brown. No longer is the United States a melting pot. It is a cauldron of hatred spilling over in every direction. Democrats vs. Republicans can change in a flash to a gossip fest. We do not discuss issues. We mock them.

Who needs ISIS? We are destroying the concepts that brought us together in the first place.

How? It begins and ends with anger. Everybody catches it from time to time. Then, we drive too fast. We break a confidence. We work too much. Left unchecked, these small and simple weeds in life can choke out our sense of anger. What's on television keeps the bile up.

We see reckless driving, vulgar commentary, and finger pointing both in person and on TV. Each causes and is caused by a sense of entitlement that further feeds anger's one true seed: pride.

It's downhill from there. I am not saying the whole world is in the clutches of pride, or that folks who run stop signs will end up slitting a priest's throat. I am not saying every fist-shaker will soon shoot up a nightclub. I am saying that we are all subject to infection by a growing anger nourished by what every type of media pours out daily. Electronic magnification of the horrific acts of terrorists and others burrows images into our minds that can feed our fears and cause an anger affecting both us and our dear neighbors.

No, television does not cause terrorism. But even the Catholic cop TV show "Blue Bloods" is replete with shootings, stabbings, and not incidentally some plain old passive-aggressive anger. There is just too much of it around, and it is getting worse. It is a systemic problem and the first system that needs treatment is the one that thinks the concept of free speech translates to a disrespectful and damaging free-for-all.

[Phyllis Zagano is senior research associate-in-residence at Hofstra University in Hempstead, N.Y. She will speak Sept. 24, 2016, at The Catholic University of America, Washington, D.C. and October 19, 2016 at Sacred Heart University, Fairfield, Conn. Her books include Women Deacons: Past, Present, Future, Women Deacons? Essays with Answers and In the Image of Christ: Essays on Being Catholic and Female.]

People | How can we stop the anger, end the fear?

Confronting the 'monarchy of fear' with spiritual resistance

Links: A defense of EWTN; post-election blame game; threats to school board members

Beyond fear: Befriending the saguaro