Poverty in the movies 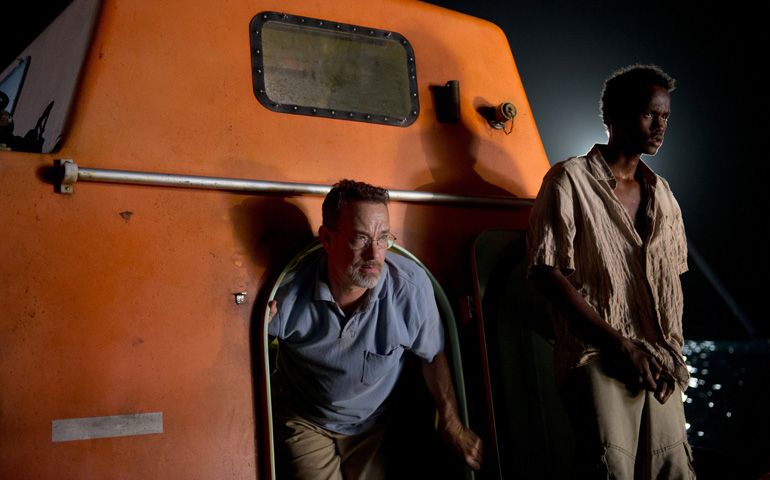 Tom Hanks, left, and Barkhad Abdirahman star in a scene from the movie "Captain Phillips." (CNS/Columbia)

By now, the film "Captain Phillips" has earned more than $62 million worldwide. The ragged band of young pirates demanded much less on boarding Maersk Alabama, the U.S. merchant ship carrying food aid from Oman to Kenya.

There is much to think about here.

When Captain Phillips left Vermont that spring day in 2009, it was just another trip for "the company." Merchant sea captains work six months on, six months off. They pick up ships in ports all over the world and deliver cargo though fog and weather on the high seas. Then they go home to tend the tomatoes and mow the lawn or to shovel snow and stack the firewood, depending on the job, the rotation, the company.

When Abduwali Muse left the Somali coast, he was part of a rag-tag bunch of boys -- don't forget that part: a rag-tag bunch of teenaged boys -- who dreamed of iPads and gold and cars and most of all, about money, and lots of it. Money would solve everything. It would buy them shoes and fill their bellies; it would get them shelter. It would make them powerful, even power brokers, in the sand and scrub that they called home. They were boys.

So then there is the movie. The U.S. ship leaves port; the Somali boys go after it. The ship outruns the boys. The boys try once again and catch it. They board the ship -- a merchant ship, mind you, armed only with fire hoses to keep the skinny pirates away.

The movie does movie things to keep suspense alive for two hours and 14 minutes. The basic story is the same as when, in 2009, four young pirates boarded Maersk Alabama and took its captain hostage on one of the ship's lifeboats. The U.S. Navy showed up. The lead pirate left the lifeboat to negotiate. A team of Navy SEALs set their high-powered automatic weapons' night-vision sights and, with clear shots of the three remaining boys, they fired. Captain Phillips was not hurt.

The boys' visions of a Somali easy street went dark.

Captain Phillips went into shock. No matter his training, his experience, his talents, his education. When too many hours in a hot and stinking lifeboat end with three shot teenagers spurting blood all over your blindfolded self, the last defenses leave and you collapse.

The Navy took care of Captain Phillips, but here's the heartbreak (or, here are the heartbreaks). First, the pirate leader boarded the Navy ship to negotiate under a real or metaphorical flag of truce. With the others dead and Captain Phillips safe, all pretenses fell away. The Navy handcuffed Abduwali Muse. Second, they were teenagers. The United States eventually prosecuted Abduwali Muse as an adult, even as he and his parents claimed he was not yet 18. The others were also, as U.S. law would have it, "minors."

So it seems, at least, the law of the sea and U.S. law melted into that hot Indian Ocean night. I do not question the need to rescue Captain Phillips, but I wonder about the application of justice. Was Abduwali Muse even legally in custody, let alone in custody to be tried in New York City as an adult?

These finer points of law will someday find their ways into law reviews and classrooms.

The human tragedy is deeper.

What in this world caused such collisions of poverties on the high seas? How is it those young Somali pirates came up against young Americans? The USS Bainbridge officers and crew members were black, and they were white. They were from Vermont and Minnesota and the Bronx. Their parents or their grandparents were from Greece or Puerto Rico or any of a hundred other countries. They boarded the USS Bainbridge with hopes of better lives.

The people there in the middle of the Indian Ocean were all trying to end poverty, both personally and professionally. The job of the well-nourished crew of the USS Bainbridge was to keep the seas open for commerce. The job of the union crew of Maersk Alabama was to deliver food to refugees in Kenya. The Somali teenagers' "job" was to stop their own spiral of poverty.

The U.S. Navy is still steaming in the Indian Ocean.

Captain Phillips is back at sea.

Abduwali Muse is now in residence at the Federal Correction Complex at Terre Haute, Ind.

The underlying story remains the same: Simplicity and stupidity blend with poverty and dreams to paint identical pictures in the minds of thousands of shoeless young men and boys around the globe. There are no winners here.

[Phyllis Zagano is senior research associate-in-residence at Hofstra University and author of several books in Catholic studies. She will speak Oct. 23 at Boston College and March 13, 2014, at Rockhurst University in Kansas City, Mo. Her recent books include Women & Catholicism (Palgrave-Macmillan), Women in Ministry: Emerging Questions about the Diaconate (Paulist Press) and Women Deacons: Past, Present, Future (with Gary Macy and William T. Ditewig, Paulist Press).]

Culture | Poverty in the movies

This Christmas, let's return to 'The Twilight Zone'

A new look at hunger