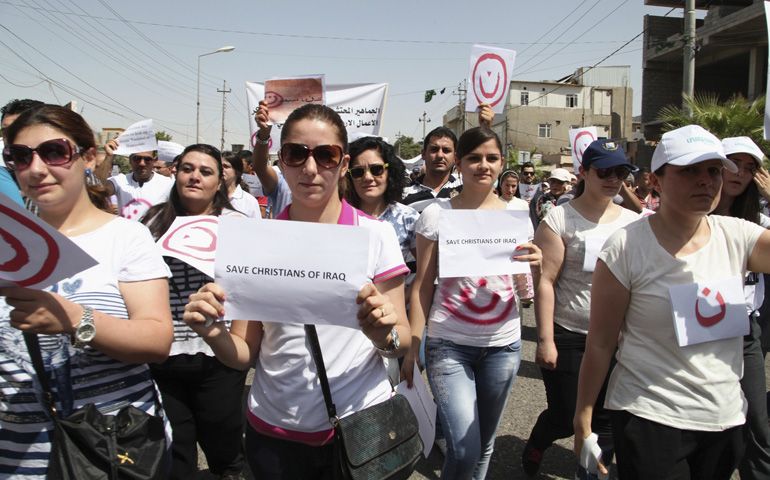 Christian demonstrators in Irbil, Iraq, carry signs as they protest July 24 against militants of the Islamic State. Hundreds of Iraqi Christians marched to the United Nations office in Irbil, calling for help for families who fled in the face of threats by Islamic State militants. (CNS/Reuters)

I have a big problem with Ph.D. clerics who carry automatic weapons. Consider, if you will, Dr. Abu Bakr al-Baghdadi al-Husseini al-Qurashi, whose doctorate is in Islamic studies. He is the 40-something Iraqi imam nicknamed Abu Du'a who recently called for the world's Muslims to follow him. He claims descent from the Prophet Muhammad.

The U.S. government calls him a Specially Designated Global Terrorist and has posted a $10 million reward for his capture or killing.

As its Caliph, Abu Du'a heads the Islamic State, formerly known as the Islamic State of Iraq and Syria (ISIS), an amorphous terrorist grouping connected by weapons and hatred of anyone and anything that does not mesh with the most extreme understandings of Islam. They have spread across Syria and Iraq.

They kill people. They blow up things.

That would be the same Jonah who spent three days in the belly of the great fish then was beached at Nineveh, where he preached repentance to an evil generation, as God directed him. Featured in both the Bible and the Quran, Jonah is well known to both Christians and Muslims. Jesus recalls him in Matthew's Gospel.

Abu Du'a and his legions do not like Jesus' followers any more than they like Jonah. It certainly looks as if they are involved in what the world recognizes as genocide.

There once were 1.5 million Christians in Iraq. That was in 2003. Now the U.S. Department of State estimates there are about half a million -- some say fewer -- mostly Chaldean Catholics and their cousins in the Assyrian Church of the East.

These Christians are most seriously under siege. In Mosul, their homes are marked with "N" for "Nazarene," an Arabic slur for Christians. They have protested. They have asked the United Nations for help. They are suffering most deeply in the cities and towns the Islamic State controls.

Iraq was once a fairly tolerant nation, and when things got bad in recent times, many Christians fled to Syria. Now the minions of the Caliph with the Ph.D. and an automatic weapon present three options for Iraqi Christians: leave, pay a tax, or die. No one knows how much the tax is. Conversion to Islam is always an option.

Things have been tough there before. In the 14th century, the Ottoman Empire's forces beheaded 140,000 Christians in Tikrit and Baghdad. New extremist twists make the current situation equally revolting.

For example, there were reports (now deemed false) of a fatwa -- a religious edict -- that the 4 million women and girls in and around Mosul would be required to undergo female genital mutilation. That the world so quickly accepted these reports testifies to the genuine brutality in Iraq and elsewhere.

Iraq and its people suffer deeply the effects of that sickness.

Iraq is ruptured and wounded. Its people are frightened and alone. But the world sees and looks away, distracted by other atrocities. There is Gaza. There is Ukraine. There is Sudan. There is Syria.

It is not enough to wander the streets of Nineveh or any other city, town or village demanding repentance. Iraq is becoming the center of hatred against all culture and history and religion. From his balcony overlooking St. Peter's Square, Pope Francis said, "Please stop!" But there must be more than a sign of Jonah here.

[Phyllis Zagano is senior research associate-in-residence at Hofstra University and winner of the 2014 Isaac Hecker Award for Social Justice. She will speak Sept. 18 at the University of St. Francis in Joliet, Ill., and Nov. 9 at Chestnut Hill College in Philadelphia. Her newest books are Mysticism and the Spiritual Quest: A Crosscultural Anthology and Ordination of Women to the Diaconate in the Eastern Churches.]

Expulsion of Christians a 'crime against humanity,' Mosul bishop says

Situation for Iraqi refugees in Jordan 'critical and dangerous'