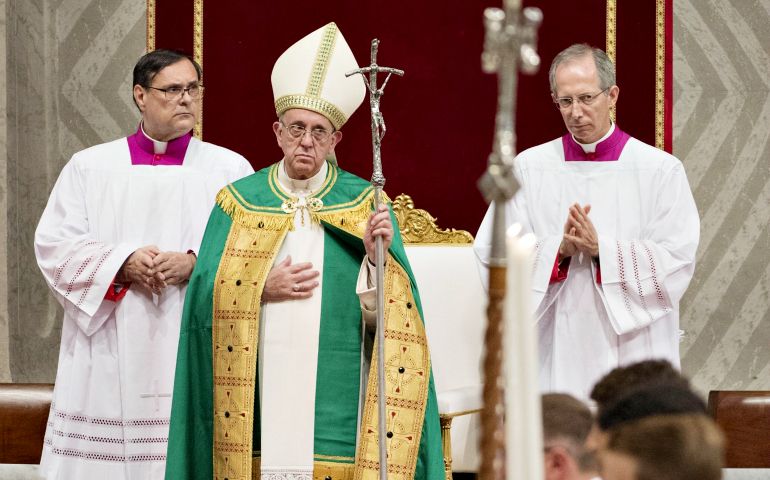 Pope Francis leads vespers for the World Day of Prayer for the Care of Creation in St. Peter's Basilica at the Vatican Sept. 1, 2016. (CNS/EPA/Maurizio Brambatti)

A coincidence of calendars this weekend presents for Catholics an uncommon occurrence, where Earth Day precedes Divine Mercy Sunday, an alignment of dates that has inspired some to use it as an occasion to live out Pope Francis' recent message on mercy toward God's creation.

They are calling it Mercy2Earth Weekend, a creation of the Global Catholic Climate Movement. During the two days (April 22-23), the international coalition of 300-plus eco-conscious Catholic organizations is inviting Catholics worldwide to use the weekend as a time to perform 500 acts of mercy for the Earth, be it cutting back on electricity use, calculating a carbon footprint or educating others on their faith connections to environmental stewardship.

The effort also hopes to re-amplify the pope's Sept. 1, 2016, message for the World Day of Prayer for the Care of Creation, in which he proposed elevating "care for our common home" to both a spiritual and corporal work of mercy.

"What we're trying to do here is translate the pope's message into action," Tomás Insua, executive director of the Global Catholic Climate Movement, told NCR. That Earth Day and Divine Mercy Sunday coincide in the same weekend, and in their first observances since the pope's message, came as a "wonderful surprise," he added.

"It was a beautiful coincidence," Insua said.

This year will mark the third time since Pope John Paul II in April 2000 decreed the first Sunday after Easter as Divine Mercy Sunday that the day has shared a weekend with Earth Day. Earth Day has been held each April 22 since its creation in 1970, initially as a way to elevate environmental protection as a greater U.S. priority. Today, it is celebrated around the world.

Divine Mercy Sunday traces back to St. Faustina Kowalska, a Polish nun who in the 1930s maintained a diary of revelations from Jesus, Mary and several saints that largely focused on humanity's need for God's mercy. The requests Faustina documented, among them veneration of a special image of Jesus and a prayer known as the chaplet of divine mercy, form the basis of Divine Mercy Sunday observations — itself a request of Jesus that Faustina recorded in the diary, including the day on which it should occur.

Throughout his life, John Paul championed Faustina's message. As archbishop of Krakow, Poland, he initiated her beatification process, and he canonized her on the same day he established Divine Mercy Sunday throughout the church.

The latest calendar oddity comes nearly eight months after Francis issued his "Show Mercy to Our Common Home" message for the World Day of Prayer for the Care of Creation — his own addition to the Catholic liturgical calendar in 2015, joining with other Christian communities in marking the day.

The 2016 message came during the Jubilee Year of Mercy and served, Francis said, as an addendum to his 2015 encyclical "Laudato Si', on Care for Our Common Home." In the 2016 message, Francis encouraged Catholics to examine their conscience and repent for sins against creation and the creator, and to "commit ourselves to taking concrete steps towards ecological conversion, which requires a clear recognition of our responsibility to ourselves, our neighbors, creation and the Creator."

As part of that, Francis proposed adding "care for our common home" to each of the traditional sets of seven corporal and spiritual works of mercy:

In preparation for the Mercy2Earth weekend, Global Catholic Climate Movement created several eco-spirituality resources for the Lenten season, including an examination of conscience based on Francis' Sept. 1, 2016, message, a Mercy to Earth rosary, and a special divine mercy chaplet with reflections on the marginalized, indigenous peoples, polluters and the whole world.

For the weekend itself, they created a list of 30 recommended acts of mercy that includes some highlighted by Francis in the World Day of Prayer for the Care of Creation message — avoiding plastic and paper items, reducing water usage, recycling and composting, carpooling, planting trees, and turning off unnecessary lights — as well as others:

The Catholic environmental network has also encouraged people to use the weekend as a time of preparation for the People's Climate March, set for April 29 in Washington, D.C., with sister marches scheduled elsewhere in the country. Global Catholic Climate Movement is among numerous Catholic organizations encouraging its members and all Catholics to participate in the march, which aligns with President Donald Trump's 100th day in office and pushes back against his administration's anti-climate, pro-fossil-fuel agenda.

A separate march for science will take place on Earth Day.

A map on the Global Catholic Climate Movement website displays more than 100 planned acts of mercy. The group has targeted 500 acts of mercy toward the Earth across the planet, be they community efforts or individual actions.

A spiritual retreat in Argentina outside Buenos Aires will include the planting of 12 trees and construction of an organic trash-recycling program.

Parishioners of St. Francis Xavier Parish in Kansas City, Missouri, plan to clean up a portion of nearby Brush Creek.

One Catholic in Manila, Philippines, has pledged to air-dry his laundry rather than use a machine.

In Ecuador, the Capuchin Brotherhood of Tiputini have planned a prayerful nature walk in the Amazon where they will pick up garbage.

Jesuit Fr. James Keenan, author of the 2007 book The Works of Mercy: The Heart of Catholicism, told NCR that monastic communities, such as the Benedictines and Cistercians dating back to the third century, have long approached the works of mercy from an eco-friendly perspective.

"Even when they were building roads, they were doing so not just for the traveler but also to keep the earth from having people walking in all different ways and ruining the earth," he said. "They were very sensitive; they've always been sensitive to the earth."

In Burlington, Vermont, Catholics from across the statewide diocese on Sunday will hold an evening prayer service focused on Francis' various messages on caring for creation. That will be followed by small-group discussions led by someone with experience with one of eight different topics — among them, energy efficiency, waste management, eco-spirituality and parish-level organizing — with the aim of turning good intentions into meaningful actions.

"The hope is that they can just generate some conversations, some ideas about how to better embrace creation sustainability in your parish, or your home," said Stephanie Clary, coordinator of mission outreach and communications for the diocese, and one of the event's organizers.

The creation sustainability roundtable is among the first events the diocese will hold during its Year of Creation. The diocesan celebration following the churchwide Year of Mercy offered a great opportunity to merge the ideas of mercy and creation care, Clary said, and also to introduce people drawn more to an Earth Day event or Divine Mercy Sunday event to the other topic.

Clary said that pairing the prayer service with the action-oriented discussion will hopefully help people make the connection of care for our common home as both a spiritual and corporal work of mercy.

"So it's not like we're just talking about and reflecting upon Laudato Si' and all of these wonderful messages from our faith about integral ecology and connection, but we're actually trying to do things," she said.

Insua of the Global Catholic Climate Movement said that viewing creation care as an act of mercy incorporates the idea deeper into Catholic spirituality. Or as Francis, quoting John Paul II, wrote in his encyclical, "If the simple fact of being human moves people to care for the environment of which they are a part, Christians in their turn 'realize that their responsibility within creation, and their duty to­wards nature and the Creator, are an essential part of their faith.' "

The traditional acts of mercy come from Jesus himself, as described in Matthew 25. It was through their practice that the early church grew, the Jesuit theologian Keenan said, as Christians fed and sheltered people, often immigrants, in cities along the Mediterranean Sea.

Keenan, Canisius Professor of theology at Boston College and director of its Jesuit Institute, added that the past quarter century of virtue ethics has more and more explored the relations of humans not just to other people or to animals, but to the Earth itself. The notion of mercy, he said, presents "a great avenue for exploring how we're related to the Earth."

As for how ingrained care for our common home becomes in Catholic understanding of the works of mercy, Keenan said that remains largely up to Catholics themselves, as Francis' tendency has been not to mandate but rather appeal to people's consciences.

"He's offering it and it needs to be received. It's up to us to receive it," Keenan said.