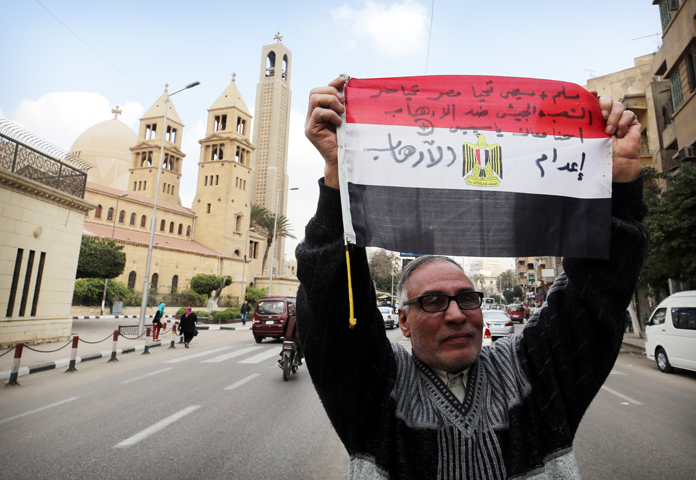 A man in Cairo Feb. 16 denounces the killing of Egyptian Christians in Libya. (CNS/Khaled Elfiqi, EPA)

For many of us who strive to seriously practice faith in Jesus Christ, and to extend that practice out into the marketplace, the political square and society at large, persecution rarely means more than being ridiculed, verbally harassed, and to a certain degree socially and politically marginalized.

But for so many other Christians throughout the world who courageously refuse to deny Jesus Christ as their Lord and Savior -- with all that that means -- persecution means torture, rape, enslavement and death.

In his well-researched 2013 book, "The Global War on Christians," Catholic journalist John Allen cites studies that indicate the number of Christians killed for the faith every year ranges from 7,300 to 100,000 worldwide.

Even the lower figure of 7,300 people murdered every year because of their faith in Christ is shocking, and sadly alarming.

While other non-Christian religious groups also suffer persecution, Allen notes that according to the German-based International Society for Human Rights, an estimated 80 percent of all religious acts of discrimination around the globe are aimed at Christians.

Allen cites the Me'eter concentration camp in the Eritrean desert as a horrific example of the numerous inhumane situations many Christians are trapped in around the world.

At Me'eter members of Christian churches not authorized by the state were packed like sardines into metal shipping containers. The metal containers were bone-chillingly cold at night, and like ovens in the desert daytime heat.

Because prisoners were given very little water, they were sometimes forced to drink their own sweat and urine to survive.

Why was there virtually no news about this anti-Christian atrocity, or the many others like it?

It is incumbent on those of us who are safe and sound to tirelessly pray, advocate for, and work on behalf of hurting and vulnerable Christians.

While followers of Jesus have a strict obligation to help all people in need to the best of our ability, regardless of their race, ethnicity, nationality or religion, we have a special responsibility to reach out to our suffering brothers and sisters in Christ.

For as St. Paul teaches in Galatians 6:10, "So then, while we have the opportunity, let us do good to all, but especially to those who belong to the family of the faith."

Allen writes, "Christians today indisputably are the most persecuted religious body on the planet, and too often their new martyrs suffer in silence."

Today we are dismayed to see how in the Middle East and elsewhere in the world many of our brothers and sisters are persecuted, tortured and killed for their faith in Jesus. This too needs to be denounced: in this third world war, waged peacemeal, which we are now experiencing, a form of genocide -- I insist on the word -- is taking place, and it must end.

So, what should we do to help end the genocide?

Every day let's remember in our personal and liturgical prayers those who suffer in any way -- especially for their faith in Jesus.

Parishes can sponsor a refugee family. Pope Francis has asked every parish in Europe to do just that. In the spirit of Francis, let's open our parishes as well to our persecuted brothers and sisters. It's not as difficult as it may sound.

Check out the website of Aid to the Church in Need, an excellent international Catholic organization dedicated to helping persecuted Christians worldwide, for more ways to help.

Bill O'Keefe, vice president for government relations and advocacy for Catholic Relief Services shared with me that it is also essential for every believer to email and call (Capitol switchboard: 202-224-3121) their congressional delegation urging them to provide significantly increased humanitarian funding and support for the immediate and long-term needs of refugees in the Middle East, full support for a negotiated peace in Syria, and a comprehensive plan to rebuild Syria once the fighting ends.

But according to U.S. State Department figures, since March of 2011 -- when the Syrian conflict started -- approximately 1,550 Syrians have been admitted through the U.S. refugee resettlement program. The U.S. can certainly do far better than this, especially since it has just recently declared that the Islamic State is committing genocide against Christians and other minorities.

As I write, the solemness of Good Friday is close at hand. And many of the followers of the crucified Jesus are being crucified with him. Let us do everything we can to remove them from their crosses, and lighten the weight of our Lord's cross who suffers with them.